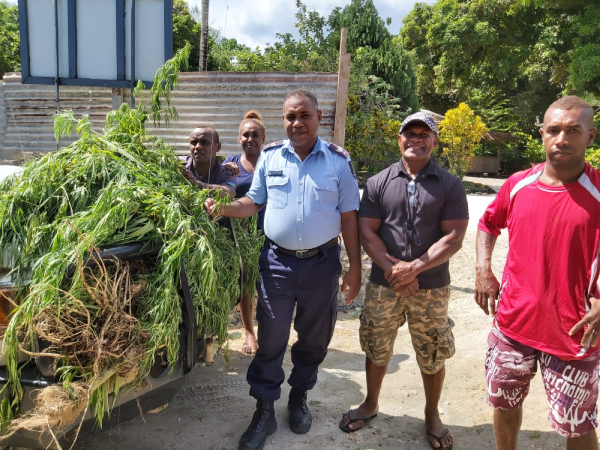 “This is a result of working together with community members who identify those who involved in farming the illicit plant.”

Inspector Koto thanked the two communities of Buianao and Coral for working together with police in identifying those who involved in cultivating the illegal plant.

According to officer who led team that conducted the raid, Sargent Robert Alegao, two suspects were identified where one is successfully apprehended by police while the other is away during the time of the raid.

Sargent Alegao said they uprooted over 100 Marijuana plants at Buiano community at around 10:30 am yesterday morning and a further 200 plus plant were uprooted at Coral community later in the day.

He said the two communities has existing by-laws which prohibits the cultivation of Marijuana.

“It is good that those two communities have upheld their community bylaws by helping police in the recent raid which resulted in the successful uprooting of 317 pants in total.”

The successful Marijuana raid is the the biggest so far carried by Auki police this year.

The estimated street value of the 317 Marijuana plants is over SBD$90,000.