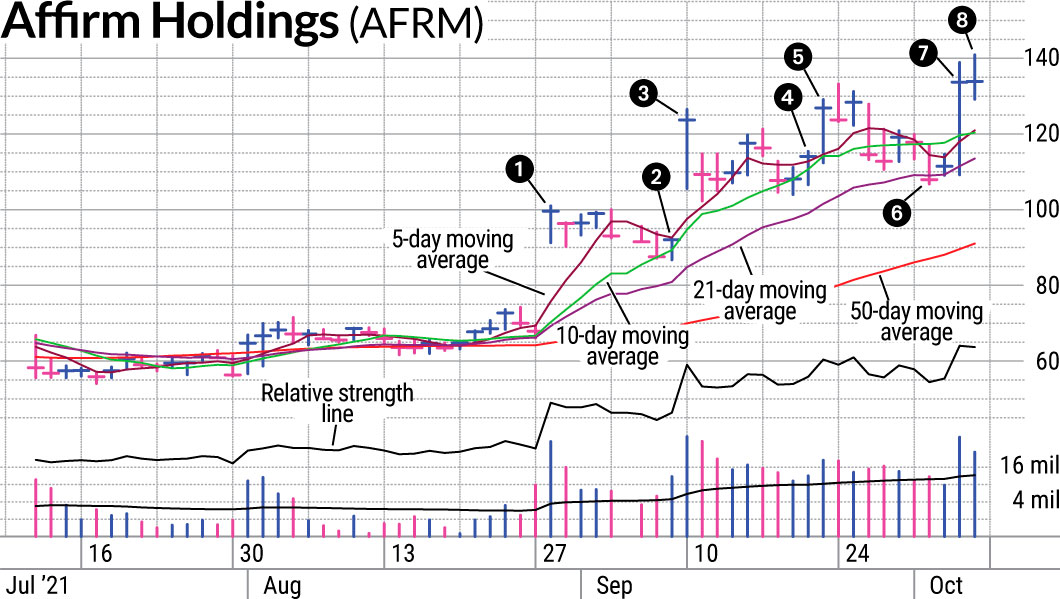 With the stock market showing indecisive action, we’ve kept our swing trading exposure light. But what happens when you have a stock that skyrockets? Here’s how we handled a recent jump in Affirm stock.

Using History As A Guide

Before addressing the recent action for Affirm Holdings (AFRM), it may be useful to view the recent history.

Affirm is at the forefront of the “buy now, pay later” trend. It originally made a big splash as it gained a foothold by partnering with Peloton (PTON) as a way for consumers to spread out the payments for the pricey stationary bike. As the partnership deals continue, so does the price of Affirm stock.

Just look at the jump on Aug. 30 after the announcement that Amazon (AMZN) would test Affirm’s buy now, pay later systems with some customers (1). Affirm stock closed up 47% that day and held the bulk of the gains over the next couple of weeks (2).

Then, Affirm stock flew up 34% after its early September earnings report (3). Though growth from its top customer Peloton slowed, the expanding partner list helped Affirm stock beat expectations for revenue and gross merchandise volume. A couple of weeks later and again AFRM stock held most of the gains (4).

After hitting a recent high on Sept. 23 (5), Affirm stock pulled back again but seemed to find support around its 21-day moving average line (6).

Another Partnership For Affirm Stock

This week, Affirm announced a partnership with another big retailer, Target (TGT). We added AFRM stock on SwingTrader right around 116 with a 4% gain early in the day (7). But we trimmed our position size slightly from the regular 9% position weight down to just under 7%. Why? Using the day’s low as the stop made sense but also gave us a larger risk percentage than usual. Rather than skip the trade, we lessened the risk with a smaller position.

Initially, the position in AFRM stock went against us. Over the next 30 minutes, the stock dropped down to 112.50 before turning around. Then it barely looked back.

We peeled off a third of the position a little more than an hour after putting it on our current trades list. It was already up 5.5%. Another third came off an hour later after hitting 11% from our entry. With this much cushion, this is where we would normally give a stock room to run.

But the recent history of Affirm stock showed a tendency to pull back after the big moves. While keeping the majority of its gains, these were still drawdowns of 15% to 20% in just the few recent examples shown here. That’s not exactly an easy hold for a swing trading style. Plus, we have a stock market potentially providing headwinds for individual stocks.

So with over a 16% gain from our entry, we booked our final profit in Affirm stock. It’s not our habit to have day trades, but for swing trading, the gain was a gift in a tough market. In exiting, we also had to accept that the stock could certainly continue higher without us. We noted that for traders wishing to turn it into a position, it could be held but be prepared to give it some room. So far, the stock is continuing to make progress with very little pullback. But as a swing trade, we nailed a solid profit in a short period of time.

More details on past trades are accessible to subscribers and trialists to SwingTrader. Free trials are available. Follow Nielsen on Twitter at @IBD_JNielsen.