At the American Music Awards 2021 last night, one of the biggest events for the music industry, stars arrived dressed in the best of luxury fashion and couture dresses.

Like every red carpet, the one at the AMAs also saw both ups and downs as some played it safe while others dared to bare with cutouts and dangerously high slits.

But it was the hostess of the night, Cardi B, who owned the red carpet and also the stage. 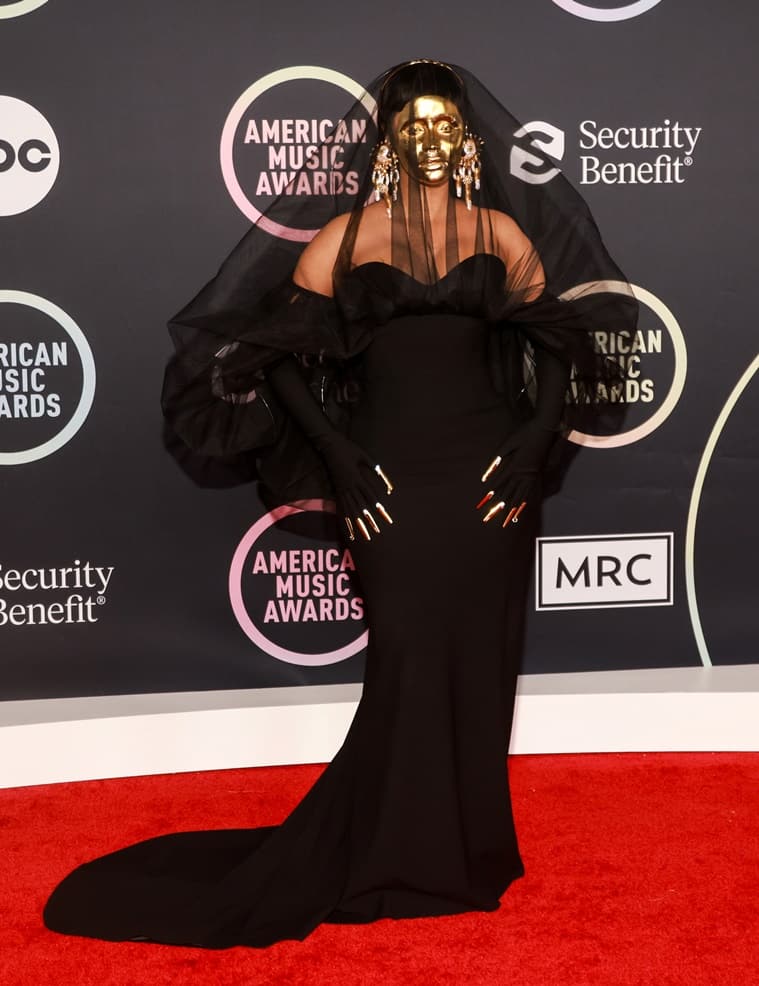 The WAP singer pulled every stop with her looks for the night. Yes, we are talking about seven different looks that stole the show, including one with a golden mask.

Styled by Kollin Carter, the rapper extraordinaire first arrived in a Schiaparelli black gown with an attached veil, but was unrecognisable in a golden mask with statement eye motif earrings, also in gold.

As the evening advanced, she changed into a fierce look from Alexandre Vauthier’s Fall ’21 couture collection to host the show. The velvet black dress, with a thigh-high slit, featured silver sequins on the cuff and the neckline. But it was the feather mohawk headgear running through the length of the dress that made looking away from her impossible.

After the two black, eye-turning, breath-stopping looks, she changed into a neon green piece from Jean Paul Gaultier’s Fall ’19 couture collection as she accepted the award for Favorite Hip-Hop Song category for her hit Up.

She went back to black as she wore another gown in the colour, this time with a front slit to show off her bedazzled crystal thigh-high boots. Her gown featured statement power shoulder with a 3D crystal embroidered panel running down the length of the sleeves.

The bling show continued in a Jean-Louis Sabaji lush purple velvet form-fitting dress which was hand-embroidered with Swarovski crystals and stones. It also featured massive ruffling feathers on both shoulders, because, well, drama was the memo the Money star got.

The sartorial extravaganza was anything but over as Cardi B re-entered the stage in a corset top and a custom jet crystal neckpiece by Laurel DeWitt. This, too, had a fan-shaped headgear.

She returned to Schiaparelli for some more golden bijoux couture in a Matador jacket and leather pants and statement earrings.

Her sartorial savoire faire concluded with a final look by Miss Sohee — in a white shimmery shell inspired capelet with an embellished draped skirt — which was made her look like a pearl in a shell that she is, with another high slit, of course.