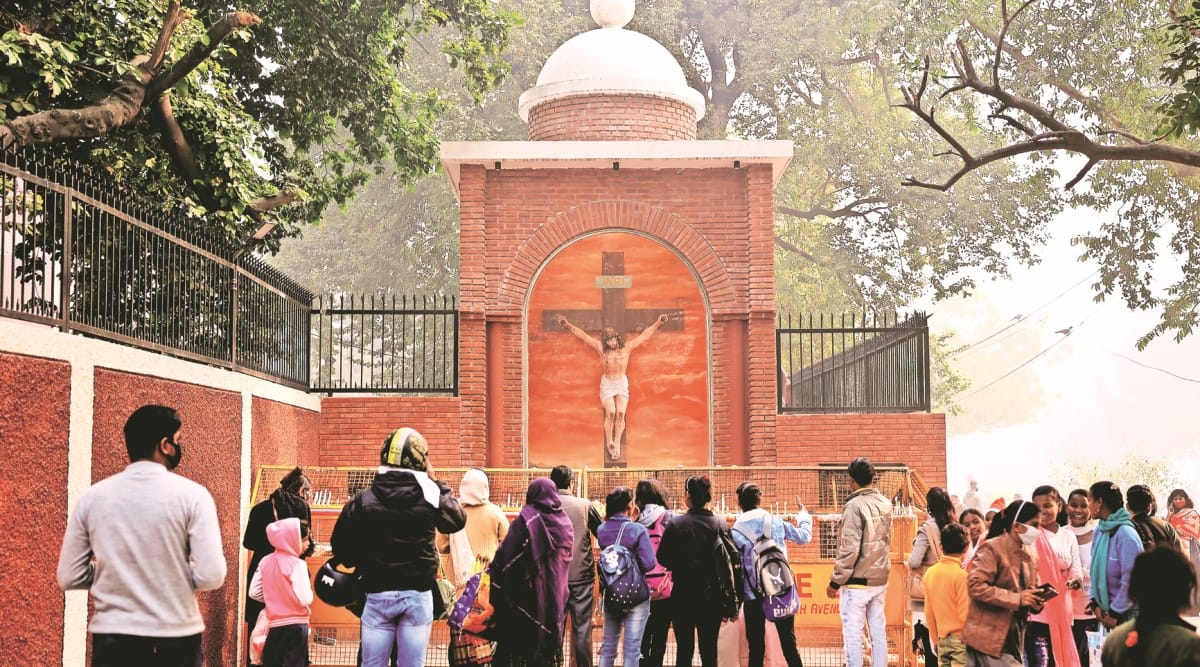 Delhi’s Sacred Heart Cathedral remained closed for visitors on Christmas to maintain Covid protocol, but the festivities played out outside its gates on Christmas Eve.

The Cathedral, one of the biggest and oldest in Delhi, draws visitors every year during Christmas. Like always, it is draped with lights and a bright star shines atop it this year as well. But for the second year in a row, it is a quiet Christmas on its premises.

To avoid large numbers, the Cathedral’s main gates were closed on December 24 and will remain closed till December 26 morning and no visitors have been allowed inside.

Besides the Christmas Vigil Mass at midnight, six other masses were held over the course of Friday evening and Saturday morning, each with entry for only 200 people who registered themselves for it online. To reach more people, the midnight mass and the Christmas morning masses were live-streamed on the YouTube channel of the Cathedral.

“It’s not nice to have to restrict people. We would have loved to celebrate with everyone. It doesn’t feel good to have to turn people away but it’s for everyone to be safe,” said a young 24-year-old volunteer manning the side gate through which registered people were entering the church. He and the other volunteers would have to keep vigil till late into the night as people flocked to the Cathedral hoping to attend the midnight mass.

Sanjay Raj had come to drop his mother, sister and two nephews for the mass. They could register but three members of his family, including him, had not been fast enough. “I’ve spent so many Christmas Eve nights here, it’s strange to know that there are such few people inside. I’ll just go home for now, I’ll attend morning mass in another church,” he said.

Beyond the barricades, the main gate was bustling with activity as dozens of people gathered to look at the lights and click photographs. Vendors selling Santa hats, plastic reindeer horns and other bric-a-brac milled around and several chaat stalls were busy with their customers.

Lines of burning candles grew in front of the statue of Christ outside the Cathedral as visitors lit them and prayed before it. Among them was Sapna (33) who had come with her parents and sister. “I wanted to attend mass but didn’t know I had to register. But it’s okay, I’ll pray here and then pray at Gurdwara Bangla Sahib and go home,” she said.