Asia-Pacific markets are set to open the trading week on a quiet note after a mostly mixed week. The Thanksgiving holiday will see markets in the United States trade on a shortened week, which could spur some potential for increased volatility. The US Dollar remains on the radar after breaking into fresh yearly highs last week. Traders will also have their ears to the ground for any word on Biden’s Federal Reserve nomination, with Jerome Powell remaining the favorite.

The only exception for an otherwise quiet economic docket is today’s rate announcement out of China. The People’s Bank of China is expected to hold its 1- and 5-year Loan Prime Rates (LPR) steady at 3.85% and 4.65%, respectively. That would represent the 19th consecutive month that those LPRs were held constant. Chinese policymakers opted last week to hold its medium-term lending rate unchanged. A surprise outside of expectations would more than likely be a cut to the 1-year LPR, with such a move perhaps boding well for the Australian Dollar.

Energy traders will be keenly watching for any further details over potential strategic petroleum reserve releases out of the United States and China, with the latter already reportedly readying such a release. The news has weighed on prices, with WTI falling over 6% last week. A resurgence in Covid cases across Europe are also weighing on demand prospects.

November’s been a downbeat month for AUD/USD prices, with the currency pair on track to fall nearly 4% through the first three weeks of trading. The 20-day Simple Moving Average (SMA) appears to be on course to fall below the longer-term 50-day SMA, which would send a bearish signal. If the downside does continue, the 0.72 psychological level and the September low at 0.7170 may offer an area for bulls to defend. 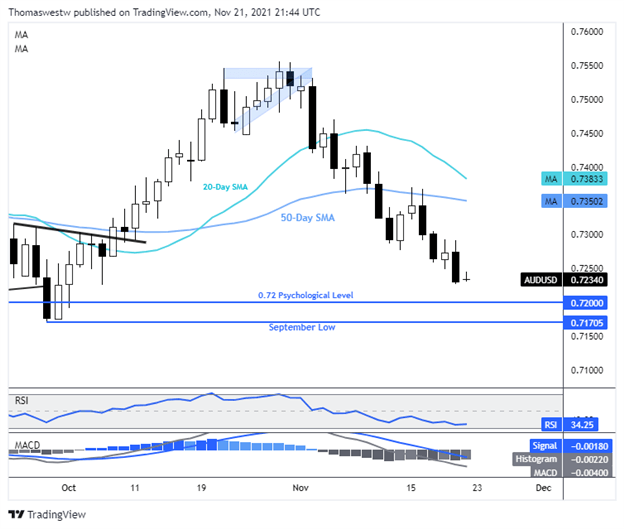