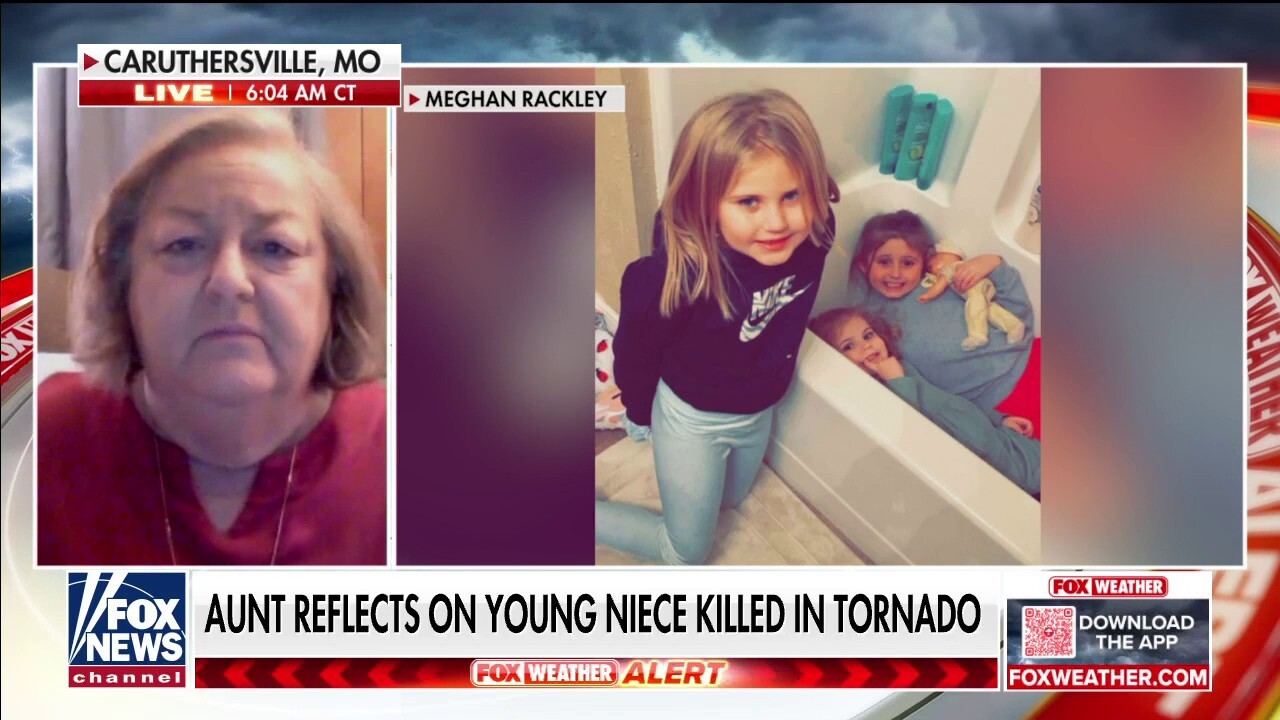 The great aunt of a nine-year-old Missouri girl killed last week in the deadly tornado outbreak across the Midwest shared the moments leading up to the tragedy in an emotional “Fox & Friends” interview Wednesday.

Sandra Hooker shared a picture of the family’s three young girls taken just minutes before the storm hit Caruthersville, located along the Mississippi River near the Tennessee border.

Annistyn Rackley was photographed clutching a doll while huddled next to her sister in the family’s bathtub while her other sister kneeled in front of them. The photo was taken by their mother, Meghan Rackley. The family’s home was destroyed as they were carried into the air by the twister, landing in a field where they were found in the mud by first responders.

In this photo provided by Sandra Hooker, from left, Avalinn Rackley, 7, Alanna Rackley, 3, and Annistyn Rackley, 9, pose for a picture in a bathroom in their home near Caruthersville, Missouri. Annistyn, a third-grader who loved swimming, dancing and cheerleading, was among dozens of people who died because of the severe storm on Friday.
(Meghan Rackley/Courtesy of Sandra Hooker via AP)

Sandra Hooker was texting with her niece Meghan about the tornado sirens going off in town when she last spoke with her.

“Sometime during this conversation, she Snapchatted that picture of the girls in the tub. And so they were ready—they thought,” said Hooker during an appearance on “Fox & Friends” with Steve Doocy, Ainsley Earhardt and Lawrence Jones.

Hooker said that the girls’ mother is “fighting for her life” and unresponsive in the hospital after sustaining severe brain trauma, broken bones, and deep lacerations.

“I just ask everyone to pray that Meghan will wake up and come back to us,” said Hooker.

Annistyn’s father, Trey Rackley, suffered cuts and bruises. He and the youngest daughter, 3-year-old Alanna, are no longer in the hospital. Ava, 7, had broken vertebrae in her back and is expected to undergo spinal surgery Wednesday.

Hooker described Annistyn as an outgoing, loving, and creative young girl that loved dancing and cheerleading. At a young age, she was diagnosed with a rare liver disease that required repeated hospital stays.

Her great aunt said that the diagnosis never held her back, and she was encouraged by her sisters and her parents to live life to the fullest.

Hooker added that she would often call Annistyn an “angel among us.”