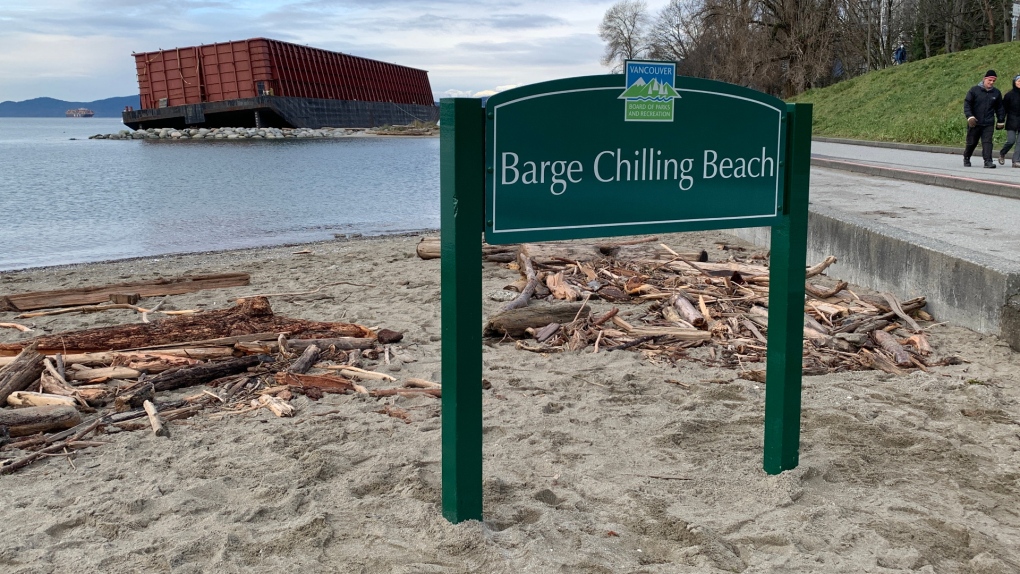 One month after a wayward barge crashed onto Vancouver’s shoreline, the city’s park board has marked the vessel’s unexpectedly long stay with a tongue-in-cheek sign.


The “Barge Chilling Beach” sign – a reference to the famous Dude Chilling Park sign in East Vancouver – was unveiled Wednesday morning at Sunset Beach, not far from the grounded vessel.


“Our little holiday gift to you, Vancouver,” the park board wrote on Twitter. “No matter what storms life may send our way, we’ll always be here for you. Wishing you all a safe and happy holiday and a prosperous 2022!”


A board spokesperson confirmed the sign is real, but would not answer any questions about it ahead of a planned 2 p.m. news conference at the beach.


Meanwhile, it remains unclear how long the barge will remain trapped on the rocks. Last week, the city said work was underway to assess and repair damage to the vessel so it could be towed away, and that the owner had submitted a recovery plan to Transport Canada, the Vancouver Port Authority, and the Canadian Coast Guard.


Transport Canada told CTV News on Wednesday that timing of the removal still hasn’t been confirmed.


“We continue to work with the owner’s representative, and other agencies, to ensure that appropriate actions are taken to effect the recovery of the barge, while keeping the public and environment safety paramount,” a spokesperson said in an email.


Officials have repeatedly noted that the vessel’s owner, Sentry Marine Towing, is solely responsible for its removal.


The park board has not revealed how much the Barge Chilling Beach sign cost, but previously estimated the cost of replacing the Dude Chilling Park sign at $1,300.


That sign was originally installed at Guelph Park without the city’s approval back in 2012, as a nod to a large public art installation depicting a figure reclining in the grass.


The park board voted to give the sign a permanent home in 2014, and has paid to replace it multiple times after it was stolen.


Our little holiday gift to you, Vancouver.

No matter what storms life may send our way, we’ll always be here for you. Wishing you all a safe and happy holiday and a prosperous 2022!