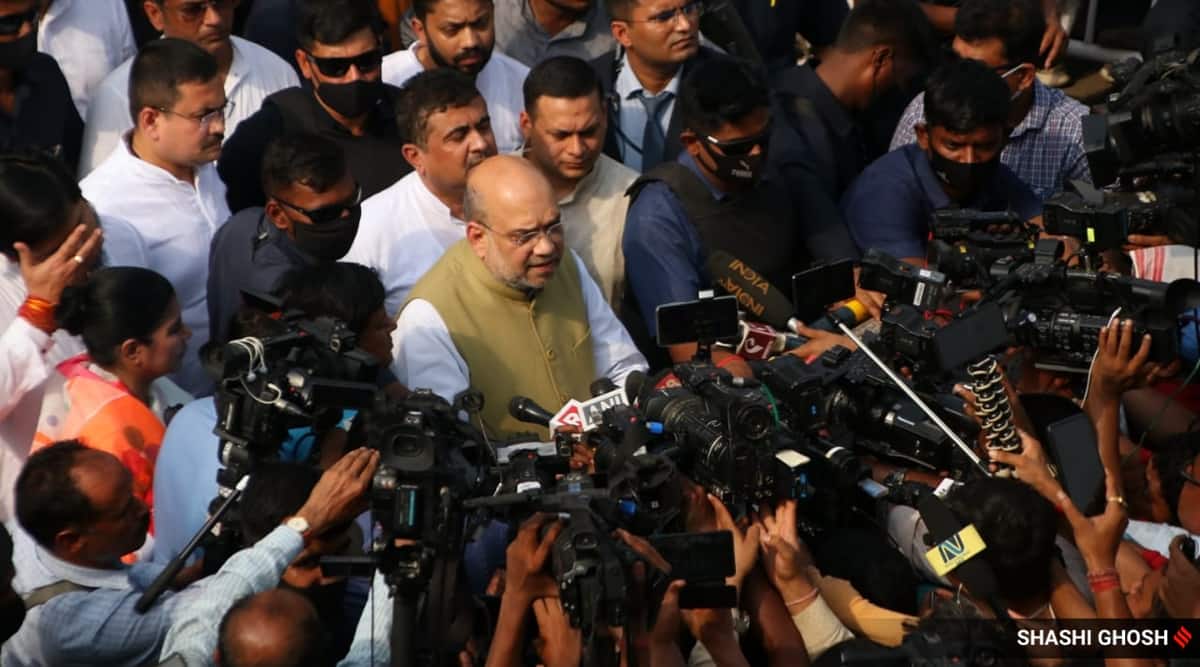 The post-mortem report of BJP worker Arjun Chaurasia, which was submitted in a sealed cover to the Calcutta High Court on Tuesday, said that his death was caused by hanging and the ligature mark on his neck was ante-mortem in nature.

Hours after the post-mortem report was submitted before the HC division bench, the ruling Trinamool Congress came down heavily on Union Home Minister Amit Shah for his “irresponsible statements” and demanded an apology. Labelling the death as a “political murder”, Shah had called for a CBI probe into it.

Citing the post-mortem report, the TMC targeted Shah on Twitter saying, “HOME MINISTER @AmitShah IS A LIAR! Just like we said, he came to #Bengal and BLATANTLY LIED. Lied about law & order in the state, lied about safety and security issues, lied about @BJP4India’s concern for the people of this country. It’s a shame that BJP had to stoop THIS LOW.”

To this, the BJP said even if Chaurasia died by suicide, he was under threat from political opponents and the same resulted in depression and drove him to take his own life.

According to the police, the investigation so far suggests that there was no scuffle with Chaurasia before his death. Sources confirmed that the post-mortem mentioned that the death was caused by hanging, thereby indicating suicide.

“The post-mortem report has been submitted before the court. It says ante-mortem hanging. We want more details to emerge through viscera sample testing. The post mortem report indicates he died by suicide. However, circumstancial evidence suggests it couldn’t have been suicide. We want to wait for the viscera report to see if Chaurasia was drugged. He could have been hanged by someone while he was unconscious,” said BJP leader and lawyer Priyanka Tibrewal, who is representing Chaurasia’s family in the case.

A forensic expert told The Indian Express that ‘ante-mortem’ means that he
was alive before the hanging, adding that the possibility of him being hanged by someone else is slim as there are no marks on his body to suggest the same.

“We don’t agree with this report. He couldn’t have died by suicide. There was no such problem in his life which could have driven him to do this. Why would he do this to himself? If he, indeed, took his own life, we want to know the reason why. Let the police investigate,” Amit Chaurasia, the brother of the BJP worker, said.

Arjun Chaurasia was found hanging in an abandoned railway quarter at Cossipore, North Kolkata. On the high court’s order, the post-mortem on his mortal remains was conducted on May 7 at the Army’s Eastern Command Hospital Kolkata by forensic experts from the state-run RG Kar Medical College, AIIMS, Kalyani and the Command Hospital.

The BJP had been claiming that Chaurasia was murdered and hanged since the day the incident came to light.

Following the autopsy report, a fresh war of words broke out between the TMC and the BJP. The ruling party labelled the Union Home minister as a “liar” while a section of BJP leaders said murder still wasn’t ruled out.

“The BJP is trying all possible ways to malign the TMC government. No one expects such an irresponsible statement from the country’s Home minister. What was the basis on which he made the statement? Even before the matter could be investigated, he concluded that it was a political murder. This shows that he is not a responsible minister. He went to Cossipore cancelling all his scheduled programmes. I would like to know how often he goes and visits such places of occurrence in BJP-ruled states. Double engine government means double problem,” state Finance Minister Chandrima Bhattacharya said at a press conference on Tuesday.

He fellow cabinet colleague Sashi Panja, who was also present at the press conference, asked if the Home minister was ready to apologise. “The Union Home minister declared before the press that it was a political murder. Is he accountable for his statement? The post-mortem report very clearly mentions that the hanging was ante-mortem in nature. If it was murder, the report would have mentioned post-mortem hanging. The report says he was alive before he hung himself. There is a ligature mark around his neck. There were no external injury marks on his body. So much for the tall claims of BJP leaders-turned-lawyers who cried foul and the Union Home minister, too, supported them calling it a political murder. We stand by our primary statement that the BJP is doing politics over dead bodies. We condemn it. Will the Union Home minister apologise for what he said? As always, following the crushing defeat in 2021 Assembly elections and also in the bye-elections held later in the state, the BJP is suffering from insecurity and is continuing with its false propaganda and fake claims,” Panja said.

“We feel and so do the people of Bengal that the double engine government is nothing but double disaster and double devastation. They are out to devastate India,” she added.

However, Congress state president Adhir Ranjan Chowdhury voiced concerns on the deteriorating law-and-order situation of the state. “The case requires a detailed investigation to find out why unnatural deaths are rising in Bengal. Everyday, somewhere or the other, murders and unnatural deaths are happening. It is because of the deteriorating law and order situation that the perpetrators of such crimes have the confidence that they won’t be caught,” he said.

BJP’s Bankura MP Subashis Sarkar blamed the TMC for the worker’s death. “Arjun Chaurasia was being threatened since the declaration of the Assembly poll results on May 2, last year. He went into depression because of such threats. If he did die by suicide, the probe must focus on why he did so,” he said.

TMC leader and Kolkata’s Deputy Mayor Atin Ghosh said, “Amit Shah should resign. It is a crime to influence a case. Before the post-mortem report is in, a Home minister cannot label a death as murder.”