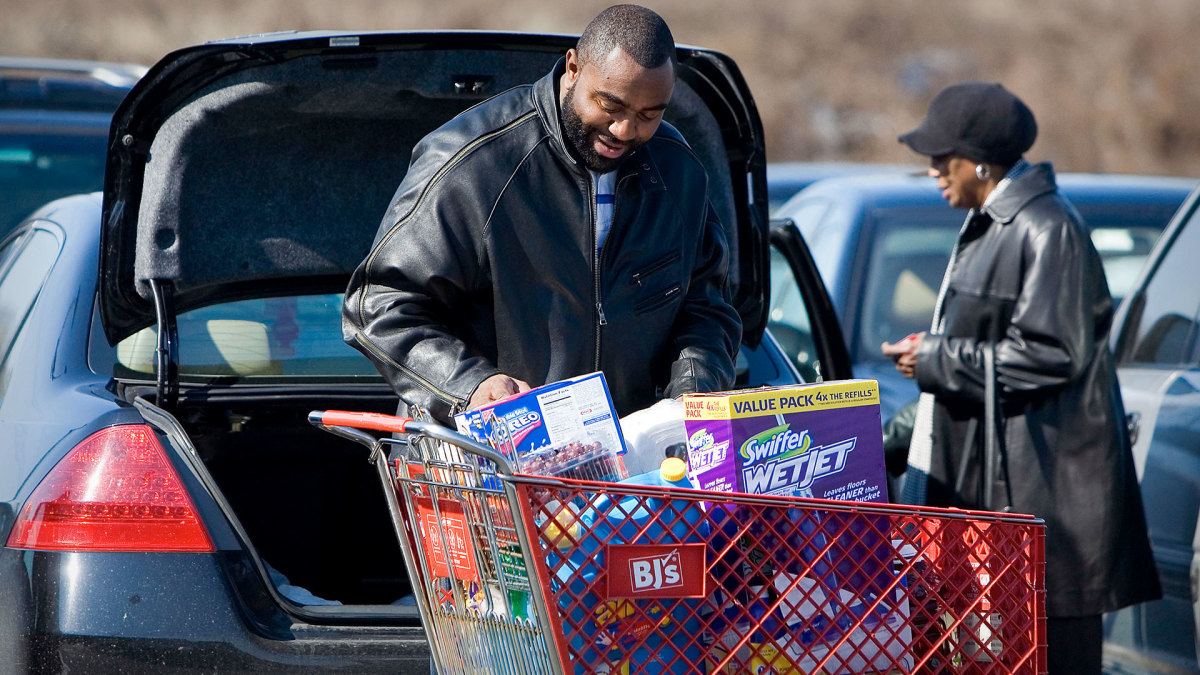 Gasoline prices are surging. Supply-chain disruptions are wrecking distribution of fruits and vegetables.

And with inflation inflating the cost of everything, consumers are being very picky about where and for what they put their money down.

That’s a good economic environment for the warehouse clubs, which in return for their membership fees save consumers money on larger-scale purchases and fuel for their vehicles.

On May 19, BJ’s reported that for the first quarter ended April 29, per-share net income rose 39% on 16% higher revenue.

And Robert Eddy, chief executive of the Westborough, Mass., operator of 229 warehouse retail stores in 17 states, and his team made clear in the company’s conference call with analysts that that’s no accident.

Gasoline prices are, as America sees them, shooting the moon, even if they’re still about half what some countries pay.

“The current consumer environment in the gasoline business drove continued increases in [comparable] gallons up 23% versus last year, and up 51% on a two-year stack basis,” Eddy said. BJ’s operates 160 fuel stations.

“This dramatic increase in market share and the rapidly increasing price of gasoline during the first quarter drove traffic into our clubs as members continue to recognize the value of their BJ’s membership.”

Costco earns a major share of its profit from membership fees.

BJ’s in its report said that membership-fee revenue rose 12% to $96.6 million.

Eddy said BJ’s “membership stats are as strong as I’ve seen in my history with the company. In the first quarter, our member count grew 5% year-over-year, reaching 6.5 million members.

“We achieved this milestone earlier than expected, driven by a combination of strong renewals, as well as membership acquisition related to new-club growth.”

BJ’s has opened three new stores so far this year. Eddy said it expected to open a total of 11 in 2022 and sees “a path to opening another 10 next year.”

In the interest of trying to relink BJ’s supply chains, in May “we closed on our acquisition of our perishable supply chain from Burris Logistics,” Eddy said.

“I mentioned last quarter that our fresh foods are a major reason why our members shop at our clubs. Having full control over our perishable food supply chain will allow us to provide more value through network efficiencies and also opens the door to long-term growth of the business. There’s a lot we can do here to elevate our fresh offering over the long run, …”

Another point of efficiency, for the company and customers: inventories. “Our clubs typically carry more SKUs” — stock-keeping units or individual products — “than our warehouse club peers, yet compete in fewer categories, thus eroding our members’ ability to efficiently shop at our clubs,” Eddy said.

And the executive said that “[digital-engaged] members tend to have higher average baskets and shop with us more frequently.”

BJ’s is seeing growth in buy-online-pickup in-store as well as requests for curbside pickup, he said. The company also has a partnership with the delivery service DoorDash.

Members also can pay a one-time fee for either unlimited or 12 same-day grocery deliveries over a year. “While it’s still in the early days, we are encouraged with the adoption rates,” he said.

In a thoroughly awful period for retail stocks, BJ’s shares have declined 17.69% over the past 30 days.