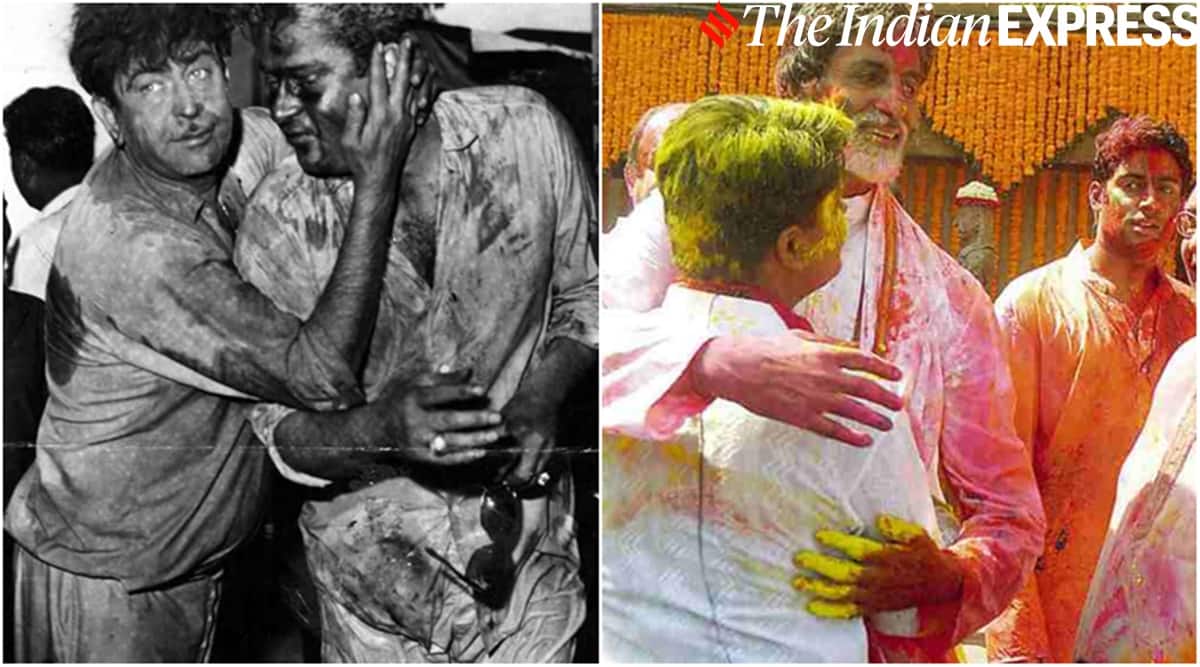 The festival of colours is back at its most vibrant this year. Due to Covid-19 pandemic, Bollywood Holi parties became private celebration with close friends and family. However, this year, we can expect some of the A-listers and newlyweds, especially Vicky Kaushal-Katrina Kaif, Farhan Akhtar-Shibani Dandekar and others, to celebrate with their near and dear ones. But before we talk about what we can expect to happen, here’s revisiting the past and recalling some of the iconic Holi celebrations Bollywood has ever seen.

Back in the days, the most iconic Holi parties were hosted by Raj Kapoor at RK Studio. The late filmmaker, with his brothers Shammi Kapoor and Shakti Kapoor, would invite close friends and family members to celebrate the festival with them. Actors such as Amitabh Bachchan, Nargis, Rajendra Kumar, Prem Nath, Nirupa Roy and others would also join the legendary trio.

Now, the Kapoor family’s Holi is more about getting together under one roof and enjoying a scrumptious meal. Kareena Kapoor Khan, who is now a mother to Taimur Ali Khan and Jeh Ali Khan, often shares a glimpse of the celebrations on her Instagram account. In 2021, Kareena’s son Taimur celebrated Holi with Inaaya Naumi Kemmu, Soha Ali Khan’s daughter. This year, the family is expected to celebrate in a grand manner as it marks Jeh’s first Holi.

The one video we all love to watch over and over again is of a young Shah Rukh Khan convincing a young Gauri Khan to dunk herself in a pool of coloured water. The throwback video of Shah Rukh’s Holi party shows the actor happily throwing water on his friends, including filmmaker Subhash Ghai and Karan Johar. Also, do not miss SRK dancing with David Dhawan, Chunky Pandey and others.

Now, SRK’s Holi celebrations are all about a meet-greet with his fans for a couple of minutes and a small celebration at home. 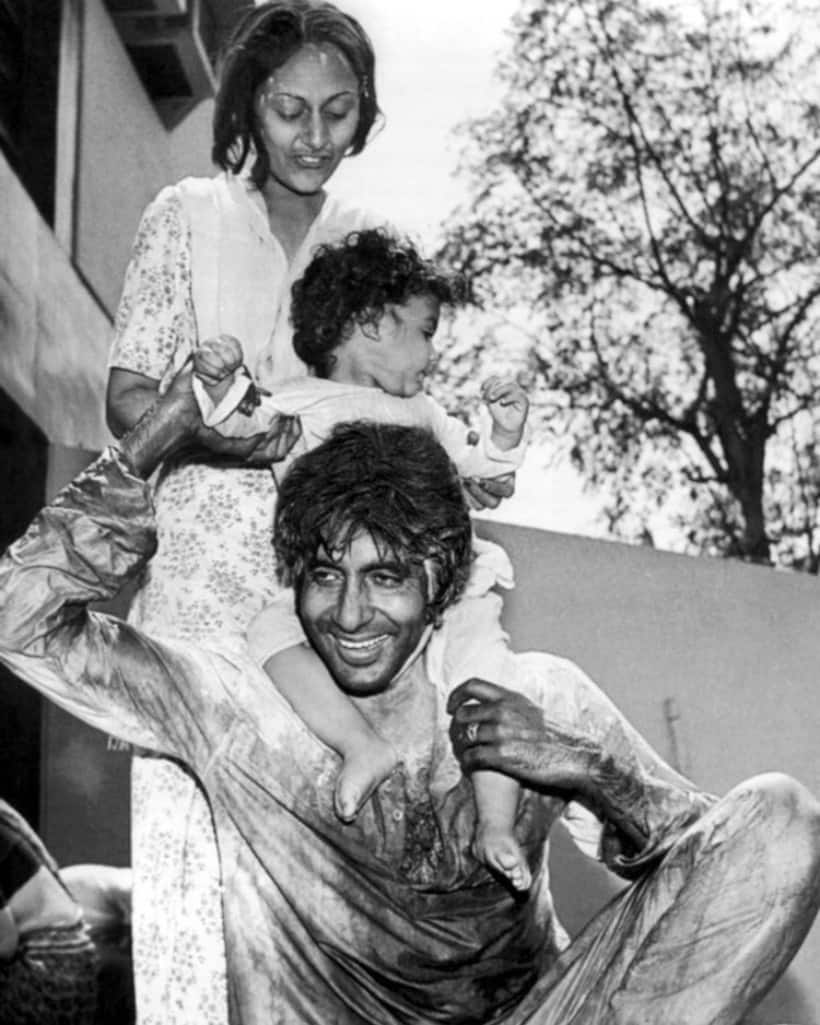 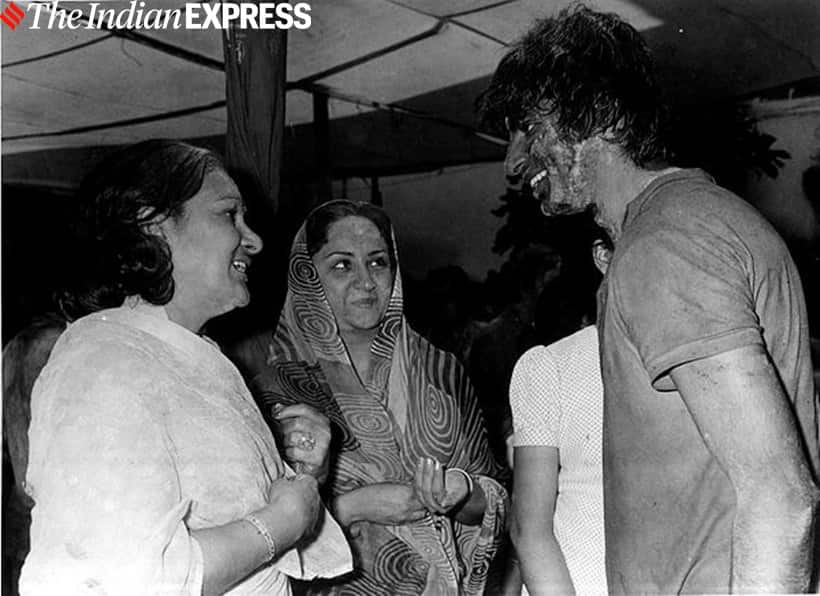 Amitabh Bachchan’s Holi bash used to be all about family, friends and lots of fun. His parties also hosted his politician friends. The actor, who is active on social media platforms, has often shared throwback photos. Sharing a photo, Amitabh had revisited the time when would celebrate Holi at RK Studio with Raj Kapoor and his family members.

In 2015, Abhishek Bachchan shared a glimpse of his Holi celebrations with Aishwarya Rai Bachchan and daughter Aaradhya. In 2021, the actor gave a throwback to the times and shared an adorable photo.

“A throwback to safer and more carefree times. Happy Holi everyone. Please celebrate this most beautiful festival, but from the safety of your homes. The number of Covid-19 cases are on the rise and we have to remain disciplined. Stay home, eat gujjias, take the blessings of your parents and take care of your family,” he wrote as the caption.

Last year, Amitabh took to his blog and recalled Holi revelry on the lawns of Prateeksha ‘from early morning till the late hours of the night.’

“Many celebrate still .. but at Prateeksha it has been quite a while .. deaths in the family .. conditions .. all have added to the reluctance .. but the spirit remains .. as have the rituals .. may you all bury your differences .. may there be tranquility and peace .. and the reason for the joy be multiplied each day among all .. HOLI HAI,” he wrote.

Isha Ambani’s Holi bash in 2020 has managed to find a place among the most amazing parties the industry has seen over the years. The party was attended by Priyanka Chopra and Nick Jonas. It was also one of the rare times when Vicky Kaushal was seen accompanying Katrina Kaif years before the two tied the knot.

Life also changed for Priyanka and Nick since 2020. The two embraced parenthood earlier this year, which means that Holi celebrations this year are going to be a bit more special for the two.

Here’s how Ekta Kapoor celebrates the festival of colours

From Krystle D’souza to Anita Hassanandani, every A-lister makes sure to attend one Holi bash in the town, which is of Ekta Kapoor’s.

Javed Akhtar and Shabana Azmi’s Holi parties are not just fun for the guests but also for the spectators. The two have often shared a sneak-peek of their celebrations on their social media platforms. This year, the celebrations can be expected to be grander than before as their fans are looking forward to Farhan Akhtar and Shibani Dandekar’s attendance. Farhan and Shibani have been grabbing headlines ever since the two tied the knot in February. This year’s Holi is their first festival as husband and wife.

Here’s looking forward to some memorable photos and videos of celebrities’ Holi parties this year.