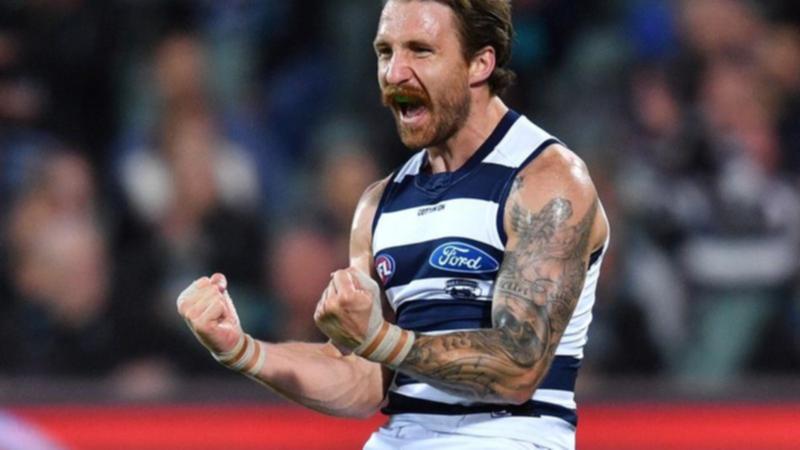 Geelong defender Zach Tuohy says the Cats won’t be lulled into a false sense of security by an AFL rival missing its biggest star when they take on GWS in a sudden-death semi-final.

The Giants have lost Toby Greene to suspension after his run-in with whistle-blower Matt Stevic, which saw the X-factor hit with a three-match ban by the tribunal for intentional umpire contact.

But the Cats are all too aware of the Giants’ capabilities when their backs are against the wall, having been upset by 19 points when the teams last met at GMHBA Stadium in round 21.

“They’re a little bit Richmond-esque in terms of how they play and we saw just how dangerous they can be just a few weeks ago,” Tuohy said ahead of Friday night’s showdown at Optus Stadium.

“It’s fresh in our minds what they’re capable of.

“(Round 21) was a particularly poor performance on our end and they’re a quality side who, when they’re given it on their terms, are basically impossible to stop.

“We allowed them to move the ball far too quickly on that occasion, so that will be a focus, but that night was probably as much down to our poor performance as it was their great one.”

But it is leading goal-kicker Greene’s absence that will be of most concern to the Giants.

“He’s a class player – he’s one of the most dangerous players in the competition – but unfortunately for us they’ve got quite a few of them in their side,” Tuohy said.

“I’m sure they’ll miss him, but we’re fully aware they’re a highly competent side without him.”

Geelong have lost star backman Tom Stewart (foot) and defence-minded utility Mark O’Connor (hamstring) to injuries in recent weeks, but will be bolstered by Tuohy’s return after three weeks out with a hamstring complaint.

The Irishman expects to continue splitting his time between the wing and half-back as the Cats attempt to patch up their back line.

“It feels like it’s been a while and I’ve had a pretty good run with injury over my career, but three weeks is more than long enough,” Tuohy said.