After the Fed expectedly raised rates by 25bps yesterday, the safe-haven Yen buckled under the ever increasing deviation between the Fed and Bank of Japan (BOJ) respectively. Thursday saw the BOJ’s Governor Haruhiko Kuroda underplay the effect of inflation on the Japanese economy in support of their current accommodative stance.

Optimism around a diplomatic solution in Ukraine continues to gain traction from a financial markets perspective, further weighing on potential JPY gains. 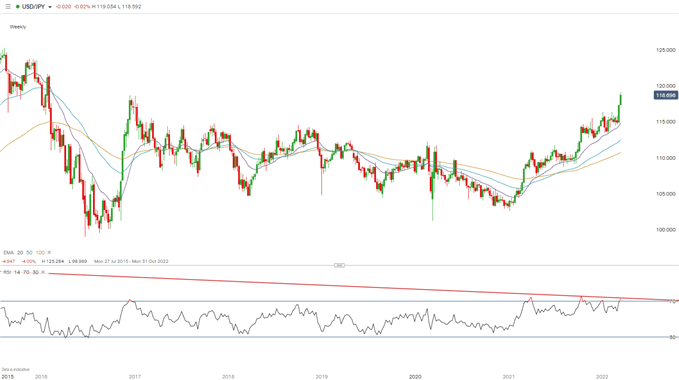 The weekly USD/JPY chart above highlights the incredible dollar rally since December 2020 now hitting 6-year highs last seen in early 2016. The Relative Strength Index (RSI) momentum indicator is the key to this chart with bearish divergence (red) presenting itself – bearish divergence occurs when price action trends up while the RSI trends downward for the same period. This phenomena traditionally leads to a move down in prices which could be sooner than expected. From a fundamental standpoint, a flight to safety should tensions in Ukraine escalate could be one such catalyst to spark this move to the downside in the short/medium-term. 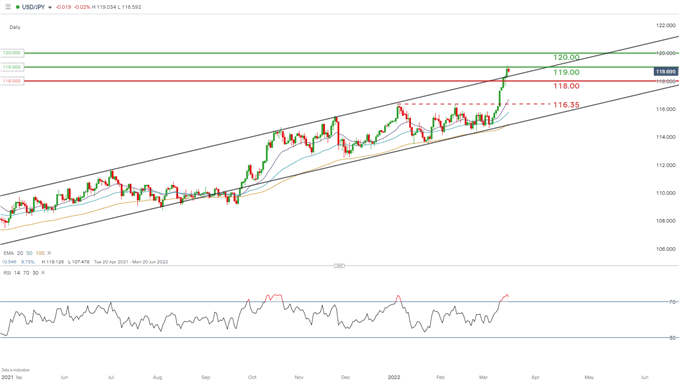 The shorter-term daily chart shows similar overextension of the USD/JPY surge with prices currently finding resistance around the 119.00 psychological level. While there is still room for the pair to reach 120.00, a pullback lower may be looming before a continued push higher.

While the lengthened departure from the EMA levels provides yet another signal that dollar longs are strained.

IGCS shows retail traders are currently net SHORT on USD/JPY, with 77% of traders currently holding short positions (as of this writing). At DailyFX we take a contrarian view on sentiment, suggestive of a bullish bias.