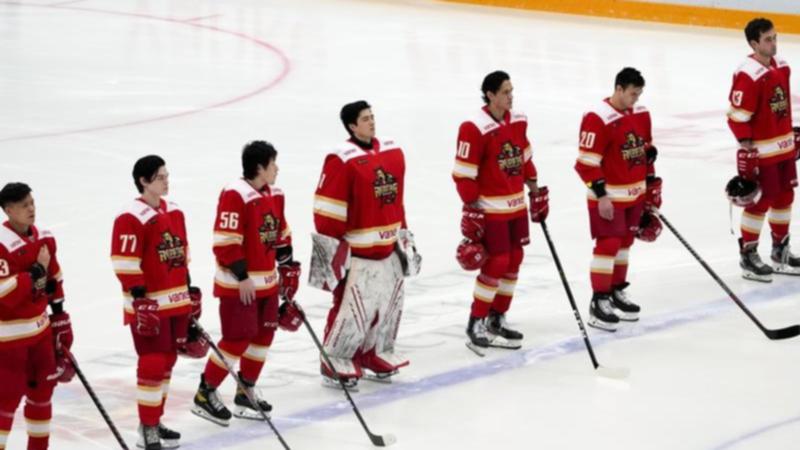 The players hoping to represent China in men’s ice hockey at next year’s Beijing Olympics have lost to a Russian club in overtime in a game used by international officials to assess the Chinese team’s competitive strength.

Kunlun Red Star, wearing red shirts with Chinese flag patches on the shoulder, fought back from a four-goal deficit to force overtime before losing to Amur Khabarovsk 5-4 in the Russia-based Kontinental Hockey League on Monday.

The International Ice Hockey Federation had officials watching the game, and will monitor another on Wednesday, to “evaluate the status of the team’s preparations” amid concerns the host nation squad will lose big on the Olympic stage.

Defence will be the priority in an Olympic preliminary round group also containing the United States, Canada and 2018 silver medallist Germany.

Kunlun coach Ivano Zanatta, who played for Italy at the 1992 Olympics, was optimistic in the wake of Monday’s narrow loss.

“It was a very strong sign of the upside,” said Zanatta. “There’s definitely signs of character, resilience and there’s more upside, no question.”

Kunlun have been playing in the KHL as a proxy for the China team and a base for naturalised players who grew up in the United States and Canada. The team have won seven of 28 games in the league this season.

Amur led 4-0 with five minutes to go in the second period in a near-empty arena in the Moscow suburbs before the comeback started.

The IIHF has refused to confirm which Kunlun players are eligible for Olympic roster spots, but one of those eyeing Beijing is winger Brandon Yip, who played 174 NHL games over five seasons, mostly for the Colorado Avalanche.

KHL records list 19 players on the Kunlun roster as having Chinese nationality, and more could be naturalised in time for the Olympics.

Time spent playing for Kunlun counts toward the IIHF-mandated two years of residence needed to qualify for international play, even though Kunlun has been based in Russia since early 2020 because of pandemic-related travel restrictions.

China got its spots in the Olympic hockey tournaments as host country and the IIHF has said it will not seek to remove the teams from the competitions.