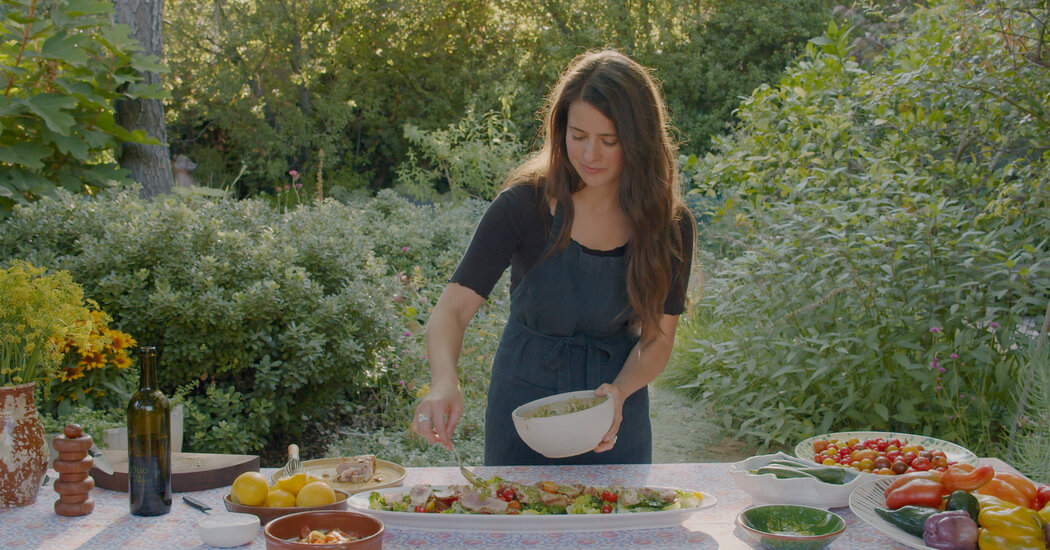 “Hi. I’m Fanny Singer. And today, I’m cooking an herby grilled tuna salad. It’s called a deconstructed salad nicoise. The majority of the ingredients for the salad are from the farmer’s market. And I always like to go to the farmer’s market and see what they have and then sort of adapt accordingly. This is kind of a adaptation of a nicoise salad with freshly grilled tuna. This version keeps it super, super light and fresh. For this recipe, you’ll need sushi grade ahi tuna steaks, red bell peppers or smaller heirloom peppers, little gem lettuces, cherry tomatoes, Persian cucumbers, and whole or pitted olives. First, you want to start your grill. And then while your coals are getting ready, that’s when you’ll make the vinaigrette, the dressing, and then also the marinade for the tuna. So to make the vinaigrette, I like to use what is called a Suribachi style mortar and pestle. It has a serrated sort of rigid interior which helps you really pulverize the ingredients. Two cloves of garlic go in there. Just a big pinch of salt. And then you just pound. Pound it into a paste. Next, you’ll take about a cup of basil leaves. Little at a time, you add back into your mortar and just pound. Al right. So this is what it should look like. And now add the mustard. Add the acid and the olive oil, and whisk it all together to emulsify. And then lastly, the zest of a lemon. Dump it in. Next, we’ll make the marinade for the tuna. It’s a tablespoon of Dijon mustard, couple of tablespoons of olive oil, couple pinch of salt. I love using Black Urfa Chili. It’s got a delicious flavor, kind of smoky and deep. And then you’ll use the juice of half a lemon. And then that will just sit in this little marinade until we’re ready to grill. When your coals are hot is when you put your peppers on. Close to the fire because you want to get those completely blackened. When the peppers have this kind of black skin on both sides, that’s when you can take them off the grill. So next up is the fish. That’s the sound we like to hear. I’m not a huge fan of like super, super raw seared tuna, which was oh so popular in my childhood in the 90s. There we go. Next, we’re going to be peeling the peppers. I like to cut them into sort of ribbons. To prepare the cucumbers, I like to just peel them partially. That will give it kind of zebra stripes. Cut usually lengthwise like this. I often cut things on the bias, which is how I describe that diagonal angle. And then the last vegetable that we’ll prepare are the cherry tomatoes. One thing I learned when I was working at my mom’s restaurant, Chez Panisse, when I was in college was to always cut through the stem scars. It makes the presentation much neater. To assemble this salad, we will throw in the cucumbers. So then I will lay this down on my platter first. Next, I’m just going to dress the tomatoes with a little bit more lemon juice, tiny bit of olive oil, and a little bit of salt as well. These will just get beautifully laid over top. The tuna is next, which is when we reveal whether I have overcooked the fish or not. Because it already kind of is separating along these lines, I’m just going to follow that. I’ll spoon some dressing just over the fish. A little bit of black pepper. And then we’ll add the peppers, which are nice sort of strewn over the top kind of like confetti. The finishing touch will be to just scatter some of your olives over top. Et voila, we have the herby grilled tuna salad.” [MUSIC PLAYING]