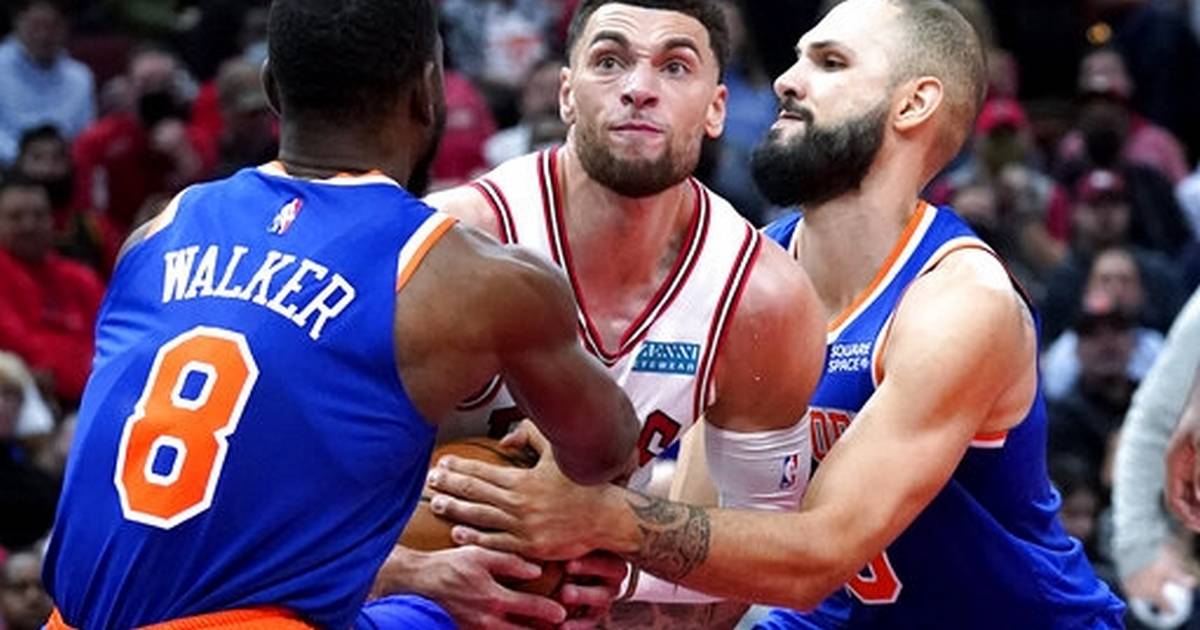 CHICAGO — DeMar DeRozan scored 31 points, Zach LaVine added 21 and the Chicago Bulls rallied in the fourth quarter for a 109-103 victory over the New York Knicks on Sunday night.

Coby White scored 10 of his 14 points in the fourth quarter as Chicago won its second straight and fourth in five games.

The Knicks won the first meeting between the teams on Oct. 28 in Chicago.

After trailing by as many as six points in the third quarter and 74-72 heading into the fourth, the Bulls opened the final quarter with back-to-back 3-pointers by White and Derrick Jones Jr. to grab a 78-74 edge.

For White, it was his first 3-pointer since being activated Nov. 15 following offseason left shoulder surgery. He had scored a total of two points on 1-for-11 shooting in his first three games.

‘I’m just enjoying the moment,’ White said. ‘I knew all the work I put in would pay off. I knew it would take some time.’

A few minutes later, White hit another 3-pointer to give Chicago a 91-84 lead with 7 minutes to go. The Bulls maintained the lead the rest of the way as DeRozan and LaVine held off New York.

‘We made some 3s because of those guys passing the ball and getting to the middle of the floor and the guys making the next pass,” Bulls coach Billy Donovan said. “It wasn’t one of those games where it was easy, but I think we figured some things out in the fourth.’

Chicago was playing its first home game following a five-game trip out West and New York was playing the second half of a back-to-back. Neither team was sharp in the first half, with the Bulls taking a 51-45 halftime lead behind DeRozan’s 12 points. The Knicks struggled from the field, but stayed close behind 16-for-18 shooting from the foul line.

New York took control in the third quarter as Randle took advantage of his size edge. Randle converted a three-point play with 7 minutes left in the quarter to give the Knicks a 59-58 lead – their first since 2-0.

Chicago was out of sorts in the third. Alex Caruso and Lonzo Ball each picked up their fourth foul early in the quarter and headed to the bench. LaVine struggled from the field and was 5 for 18 overall and 0 for 5 from 3-point range through three quarters.

‘I like the way we played for three quarters,’ New York coach Tom Thibodeau said. ‘I felt we weren’t at our best in the fourth. I felt the effort was there. We have to take a hard look at what happened in the fourth.’

Knicks: C Mitchell Robinson is in the NBA’s concussion protocol after being hit in the face during Saturday’s game against Houston and didn’t travel with the team. There’s no timetable for when he’ll be cleared. ‘He has to go through all the protocols,’ Thibodeau said. ‘When he’s available, he’s available.’ … F Taj Gibson (groin) missed his second straight game.

Bulls: C Nikola Vucevic, who’s been out with COVID-19 since Nov. 11, has emerged from isolation under the league’s health and safety protocols and rejoined the team on Sunday. When he is able to play in a game remains unclear. ‘The next step is clearing all the cardiovascular protocols,’ Donovan said. ‘It’s all up to the doctors at this point.’