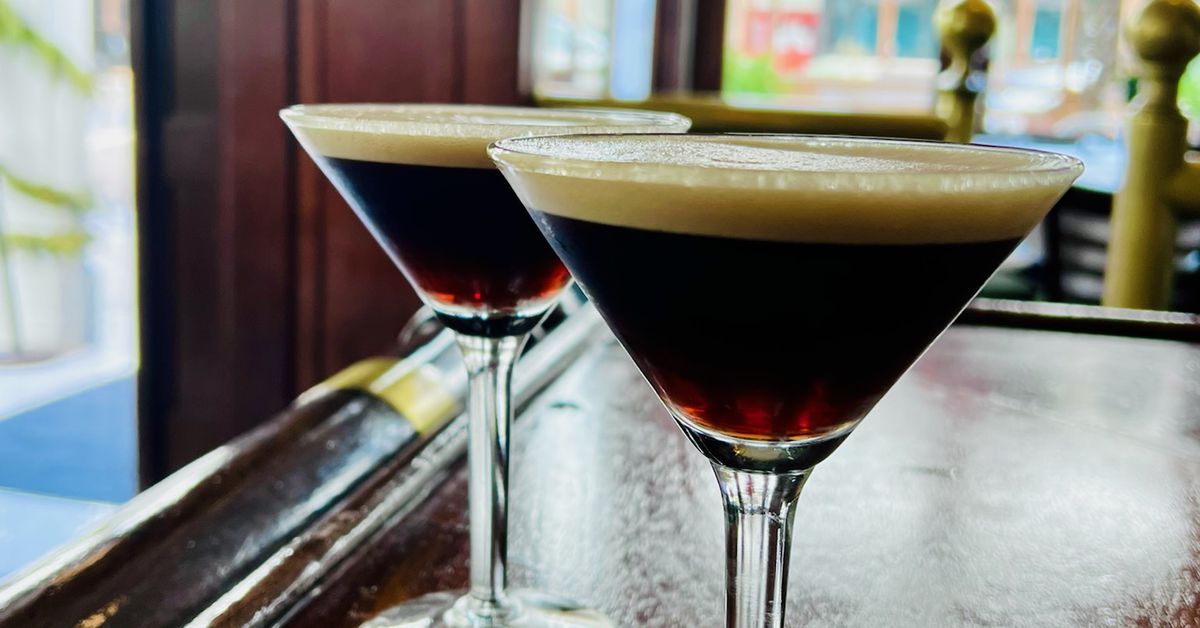 Strong and sweet with double the buzz, espresso martinis appear to be on a bit of an uber-caffeinated nationwide bender. Over the summer, the New York Times proclaimed “the espresso martini is everywhere again,” calling its rise in popularity a 90s comeback. Grubstreet fired back in the fall with “why bartenders hate the hottest drink on the planet”, and Punch followed with a fictionalized “day in the life” account of a personified espresso martini, who appears to be a man-spreader on the subway.

But even if some bartenders hate the coffee-infused martini (it’s annoying to pull shots of espresso all night, per Grubstreet), drinkers can’t seem to get enough. But now San Francisco has entered the group chat and would like to have a word: First of all, espresso martinis are nothing new. Second, ours are actually good. In a town that loves coffee, from Italian dark roasts to third-wave specialties, and coffee cocktails, most iconically the fog-cutting Irish Coffee from the Buena Vista, espresso martinis have been on the menu for decades.

So, let’s not call it a comeback, but rather a classic satisfying a current craving.

The best-known espresso martini in San Francisco is arguably the Espressotini at Balboa Cafe, the Marina’s century-old brunch institution. Bartender Ashley Wacker joined the team during the pandemic, coming from Harper & Rye, the cozy bourbon bar on Polk. “When I first started, I was floored by the amount of espresso martinis,” Wacker says. “It’s by far the most popular drink.” And though the drinks been on the menu for at least five years, “it’s really taken off this past year,” she confirms. Big groups come in and order 12 to a table, and not just one, but two or three rounds. Originally Wacker thought this was an isolated obsession at Balboa, but she bartends at a couple of other bars and says martini mania is ripping around town.

Balboa does two versions: They have an espresso martini on tap to pump out fast. Top Hat Provisions crafts a dark condensed coffee, which they combine and keg with Stoli vanilla vodka and Kahlua coffee liqueur. Thanks to a nitro tap and a shake, it gets double the foam, served thick and clean without any garnish. By request, they’ll also pull a shot of espresso and do a made-to-order version. It’s darker in color and not so nitro smooth, but some people prefer fresh espresso, and it can be made decaf to dodge jitters. Balboa also sells canned espresso martinis (over the bar for $15), if you prefer to walk a cocktail over to the green.

Espresso martinis are also a mainstay at 15 Romolo, the back-alley bar still shaking after 20 years in North Beach. Bartender Kevin Hoskins, coming from Starlight Room, confirms that even though espresso martinis have been on the menu for several years, they’ve noticed an uptick to about 50 orders a night. “The first one that goes out on a tray means that more people are going to order them,” Hoskins says. “There’s this kind of effervescent smell that you get from coffee … you don’t have to see it, but just the smell of coffee in the room makes people want the cocktail.”

The 15 Romolo version is deceptively simple, featuring only three ingredients: cold brew espresso, vodka, and sherry. But it has deep flavors, starting with Caffe Trieste’s Italian dark roast espresso that’s cold-brewed and infused with vanilla, mint, cinnamon, orange zest, star anise, and cacao. Sherry is a slightly unusual sweetener, and it’s specifically dark and inky Pedro Jimenez. Hoskins says it requires a good hard shake, a prompt pour, and a moment to let the foam lift before bartenders can float the surface with the classic trio of coffee beans.

At Macondray on Polk, the two-year-old bar that’s downright dripping with plants, the crowd usually slams spicy margaritas and chicken tenders, but espresso martinis are upsetting the menu due to popular demand. Owner Aaron Paul has been bartending for the better part of three decades. “Here in the city, I’ve seen the espresso martini come and go over the years,” he says. “I would be hard-pressed to think of a time when I didn’t have a coffee cocktail on the menu. But about a month and a half ago, it really exploded.” Macondray is now shaking more than 20 a night or nearly 1,000 in the past month. It’s the bar’s third most popular menu item.

The Midnight Mookie is the creamiest of this particular trio. Paul takes Humboldt Distillery vodka and infuses it with medium roast Jacob Wonderbar Brew from Philz Coffee. That goes into a sous vide bath, then an ice bath, so it’s chilling by happy hour. Then he adds coconut milk for body and Angioletto hazelnut liqueur for nuttiness, and “shakes the fuck out of it” to get a lofty froth. The piece de resistance is a nostalgic sprinkle of Folgers on top — the conventional instant coffee speckles and melts into the foam.

With many drinkers rediscovering the classic, San Franciscans’ love affair with espresso martinis is being reignited. Notably, with the exception of Balboa Cafe’s off-menu option, none of these bars are handling hot espresso; they all opted for cold brews, concentrates, and infusions. And unlike other iconic cocktails which might have stricter expectations, there’s no one way to shake an espresso martini — at least not today in San Francisco. Vodka and espresso are a starting point, but the real thing is often replaced or enhanced with coffee liqueur like Kahlua or Mr. Black. Plus bartenders are mixing coconut or rice milk into their coffee or adding a cappuccino-esque citrus twist. Wilder has one with cinnamon-spiced horchata. Devil’s Acre is swapping vodka for aged rum. And Bond Bar is garnishing theirs with a Bob’s doughnut hole on a pick. “It’s open to interpretation,” Paul says. “It’s kind of a modern classic. There are no rules.”