The Euro is marginally weaker against most G10 currencies but is particularly susceptible to the renewed dollar strength after yesterday’s Fed meeting which served as hawkish confirmation.

While the possibility of a surprise rate hike was extremely low, markets knew that the main event of the evening was going to be the press conference after the decision to leave rates on hold was confirmed.

Considering the recent drop in equity markets, market participants would be forgiven for thinking Fed Chair, Jerome Powell would err on the side of caution with respect to his messaging despite the Fed having no explicit mandate to consider the ongoings of the stock market. Instead, he failed to rule out a rate hike at every meeting scheduled for this year and the possibility of a 50 basis point hike is also not off the table.

Such bullish confirmation sent EUR/USD lower as the ECB remains comparatively dovish in its approach towards policy normalization. ECB Chief Economist, Phillip Lane earlier this month mentioned that the ECB foresees inflation dropping in 2022 and settling below the Bank’s 2% target in 2023 and 2024, which lessens the urgency to hike rates before 2023 even as inflation sits at 5% currently (December 2021).

On the political front, Italian parliament and regional representatives continue the lengthy process of deciding who will become the next president after current incumbent, Sergio Mattarella has made himself unavailable for a second term.

The Euro is marginally weaker against most G10 currencies but is particularly susceptible to the renewed dollar strength after yesterday’s Fed meeting which served as hawkish confirmation.

After a brief upside fakeout EUR/USD has come right back down and trades well below the lower bound of what appears to be an ascending channel in the context of a larger downtrend. The recent conclusive break below the channel has only gathered momentum but be vigilant for any short term pullbacks, particularly if we enter oversold territory on the RSI. 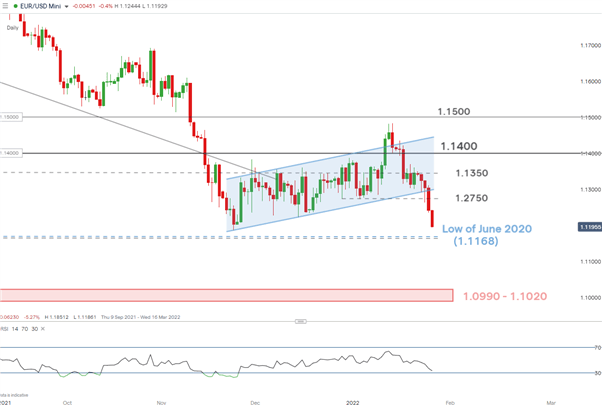 Considering the prospect of more prolonged drop in EUR/USD, it becomes easier to spot potential levels of support on the weekly chart. The most immediate level remains 1.1168 (June 2020 low) with continue selling highlighting the zone of support (1.0990 – 1.1020) and 1.0770. Resistance may be provide by the 1.2750 level before the lower bound of the now broken ascending channel and finally, the 1.1350 level (refer to daily chart). 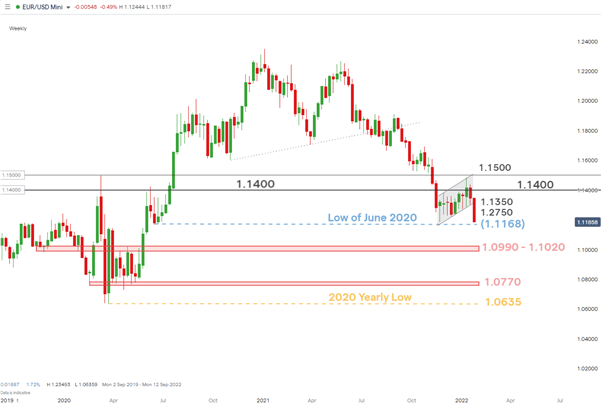 Price action and retail (IG) client sentiment are further at odds than in previous weeks. Essentially, traders seem to be doubling down on a bullish reversal at such low levels, which, considering the current trend and the now confirmed hawkish stance of the Fed, does not bode well for any potential Euro strength apart from any month end adjustments. 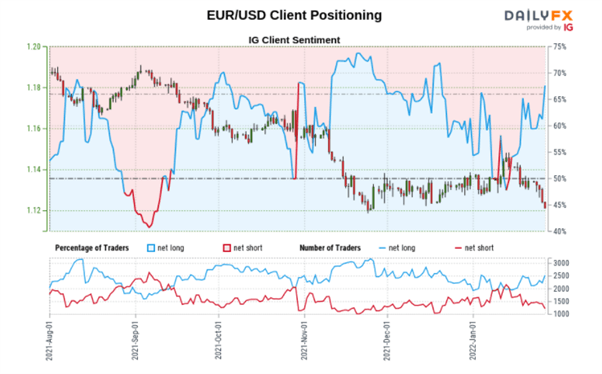 We typically take a contrarian view to crowd sentiment, and the fact traders are net-long suggests EUR/USD prices may continue to fall.

— Written by Richard Snow for DailyFX.com