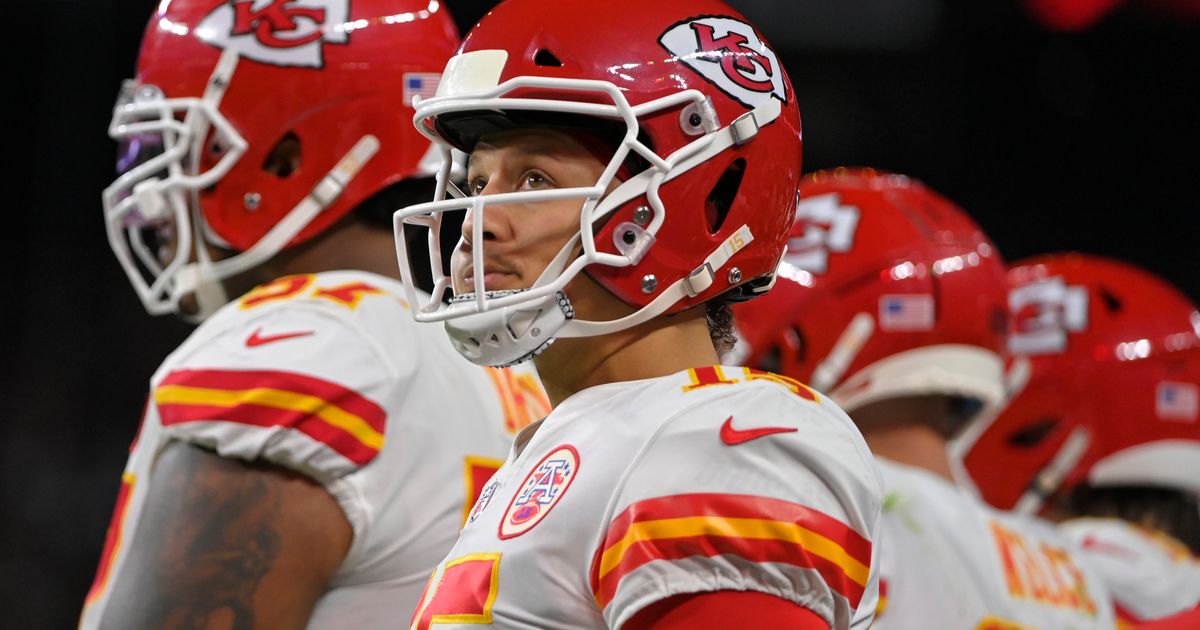 KANSAS CITY, Mo. (AP) — The Chiefs were downright awful on defense. Patrick Mahomes was supposedly broken. Injuries had mounted. The rest of the league had caught up to them. Their window for competing for championships had already closed.

Well, look at them now.

Mahomes threw for 406 yards and five touchdowns without an interception, and the Chiefs piled up 516 yards, during a 41-14 romp over the Las Vegas Raiders on Sunday night that should serve notice to the rest of the NFL: The two-time defending AFC champs aren’t going away without putting up a fight.

“I think the whole team got that swag back,” Mahomes said, “and we got on a roll. We have to keep that thing rolling.”

That’s because for all their problems the first eight weeks of the season, the Chiefs (6-4) have suddenly won three straight and four of five to take over first place in their division. And after they face the resurgent Cowboys on Sunday, they have the benefit of a late-season bye to catch their breath and prepare for what they hope is a strong finish.

“You have to develop your own personality. Every team is different every year,” Chiefs coach Andy Reid said. “You can’t worry about the expectations and all that stuff. You must get to the nitty gritty and built it. Our guys have done that, and we are getting to know each other better and we must keep playing away.”

It helps that the Chiefs are nearly whole for the first time all season.

Their defense is playing better in part because pass rushers Chris Jones and Frank Clark are healthy, and the addition of Melvin Ingram has provided some extra juice on that side of the ball. The result is a defense that held the Raiders to 1 of 9 on third down, 299 yards and forced two turnovers on Sunday night.

On the other side of the ball, Mahomes has finally jelled with an entirely new offensive line, and injured running back Clyde Edwards-Helaire returned to practice last week and could play this week for the first time since Week 5.

“We’re trying to be our own version of the Kansas City Chiefs,” Mahomes said. “Obviously we know what it takes because we’ve been to the Super Bowl and stuff like that. But I think we’ve kind of went back these last few weeks and take it day by day. Let’s not worry about the Super Bowl right now. Let’s figure out how we can make ourselves better as a team each and every day. I think that’s what you’ve seen these past three weeks.”

The defensive line got embarrassed the first six weeks of the season, but adding Ingram to the edge has allowed Jones to slide back to defensive tackle and suddenly made the Chiefs stout up front. They held Josh Jacobs to 16 yards rushing on seven carries and the Raiders to 50 yards rushing in all.

The Chiefs only gained 94 yards on the ground, though part of that had to do with Mahomes’ success through the air. And the return of Edwards-Helaire should give the Kansas City ground game a big boost down the stretch.

Tight end Travis Kelce had struggled to get open against double- and triple-teams this season. But he found plenty of space to run free in Las Vegas, catching eight passes for 119 yards and helping the Chiefs build an early lead.

Special teams have been shaky for Kansas City all season, and the latest gaffe came when Mike Hughes fumbled on what would have been an excellent punt return Sunday night.

Defensive back Charvarius Ward and linebacker Willie Gay Jr. dealt with a stomach illness Sunday night. They put right tackle Mike Remmers (knee) on injured reserve before the Raiders game but did not make a corresponding move, which could mean offensive lineman Kyle Long gets activated from the PUP list this week.

3 — Mahomes has three games of at least 400 yards passing and five TD throws since he was drafted in 2017; the rest of the NFL has combined for four — one each from Tom Brady, Aaron Rodgers, Deshaun Watson and Jared Goff.

The Cowboys (7-2) looked as if they were falling apart when they were routed by the Broncos in Week 9. But they promptly blew out Atlanta 43-3 on Sunday to set up a showdown Sunday between two teams with Super Bowl aspirations.