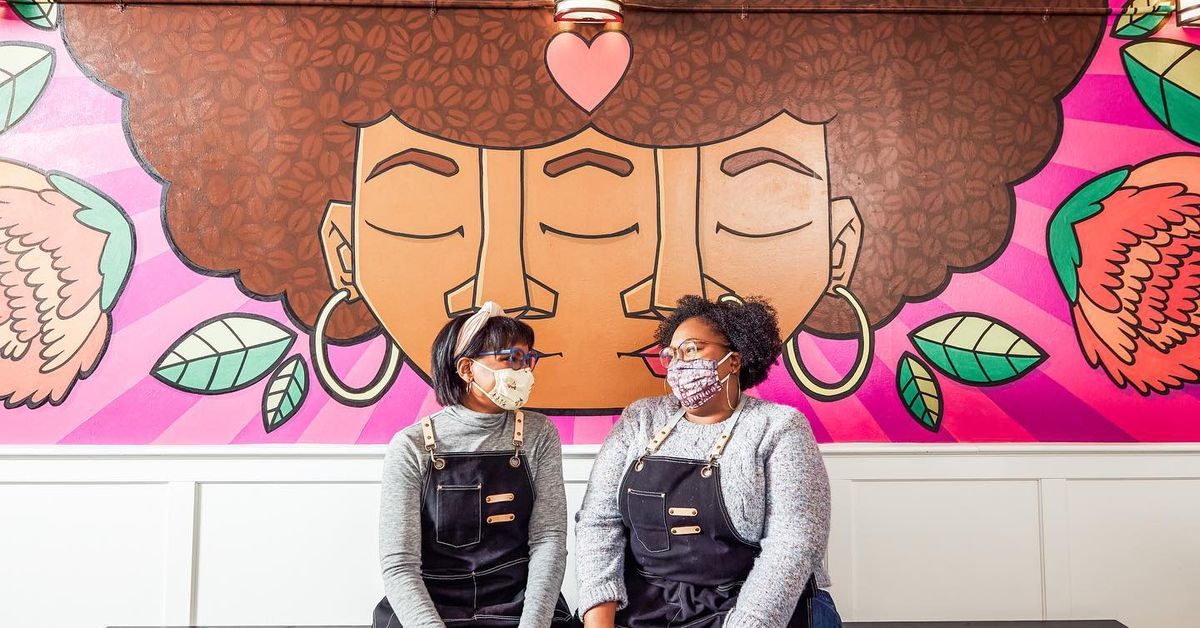 Scrolling through TikTok in September, I saw an increased number of “What I eat at Din Tai Fung” themed videos across my “For You Page,” where creators demonstrate everything they indulged in down to the exaggerated last bite. The mini-mukbangs of creators feasting on cucumber salad, dumplings, wontons, and xiao long bao have garnered more than 75 million views of the #dintaifung hashtag on TikTok alone.

So I finally took the trip to Din Tai Fung, a wildly popular Taiwanese chain for soup dumplings and noodles with its only Northern California location inside the tony Westfield mall in Santa Clara. Inside, the lighted signs for Bath & Body Works and Build-A-Bear guided me to the dumpling icon, which has 13 locations across the West. I placed my order for takeout and waited an hour; the restaurant staff confirmed that the increased wait time and uptick in weekend customers seemed to be a direct result of TikTok.

Din Tai Fung’s success on TikTok is a viral moment that illustrates the sweeping popularity in food trends born from the app, including the Emily Mariko salmon and rice bowl, pickled garlic, and southern spicy bowls. Of course, Din Tai Fung is a big restaurant group that’s already incredibly popular, but its TikTok presence is a telling example of how a viral moment — which on TikTok doesn’t just mean one video capturing thousands or millions of views but also inspiring a meme replicated in other videos, using the same sound — can grow into a trend reaching millions of potential new customers.

Abu Salim Middle Eastern Grill in San Francisco is known for its fresh falafel, kunafa, and loaded shawarma plates — as well as posting some mesmerizing hummus spins on TikTok. Salim Nasser, the 24-year-old co-owner, previously worked at his father’s celebrated restaurant Old Jerusalem. TikTok was something he wanted to pursue since he got his own business, although it took some convincing for his business partner Khalil Sihred, who’s nearly twice Nasser’s age, to agree to post on the app. Aside from boosting the business to new customers, Nasser felt driven to create content because he strongly believes in the aesthetic quality of his food.

“There’s so much to take footage of. I actually have the backup to show it’s not like we’re using frozen food, canned food,” Nasser says. “I mean, I’ve noticed a lot of videos on TikTok that are getting a lot of views, and I’m just looking at my food, and [it] looks better.”

He’s right. The richness of Nasser’s food packs a powerful visual punch, with closeups of freshly blended hummus topped with vibrant parsley, fragrant paprika, and a pool of olive oil. His TikTok serves as a virtual tasting menu, so much so that Nasser is able to determine if someone visited the restaurant after watching a TikTok if their order matches his latest post.

Nasser has taken advantage of the platform but struggles to find the time to post consistently while running a restaurant. Although primarily short-form, with the platform’s longest videos capped at three minutes in length, TikTok can be time-consuming; planning, shooting, and editing content is often an impossible task for small restaurant owners who are already operating their establishments. But for Nassar, time, effort, and a phone camera can pay off: He estimates a 30 percent overall increase in sales whenever he posts a video on the platform, and triple the sales of the specific menu item featured.

Nirvana Soul is a popular coffee shop in San Jose, offering creative spins on classic drinks like the Sweet Potato Pie Latte and the Teamosa (a sparkling tea drink with pineapple mimosa tea and hints of peach), as well as an assortment of waffles, including churro and bacon-cheddar variations. It’s a Black woman–owned cafe founded by sisters Be’Anka Ashaolu and Jeronica Macey; Ashaolu transitioned her skills as a vice president of marketing at Propel tech company to grow the brand. Nirvana Soul started growing its online community via Instagram for two years before it opened in 2020, and its account now boasts nearly 14,000 followers. The coffee shop does not have its own TikTok account because, according to Ashaolu, the duo was “just trying to manage having a business, so learning a whole new tool was just not a big priority.” Regardless, TikTok found them.

“We did know that we were getting a lot of user-generated content,” Ashaolu says. “Our customers are super creative, and they create across all of the different channels.”

I discovered the cafe from TikTok user FoodWithSoy (813,000 followers), a food and culture creator based in SoCal, who included Nirvana Soul in a series of videos highlighting restaurants during a trip to the Bay Area (reaching up to 260,000 views). Nirvana Soul’s bright, open storefront feels like a tropical paradise enhanced by pink accents and murals, making it the perfect setting to capture its unique drinks. “We wanted it to be an inspiring space particularly for creatives, believers, artists, and all of us. So I think when someone comes into that space, who is a creator on TikTok or otherwise, they have a lot of material coming there,” Ashaolu says. That Nirvana Soul is Black woman–owned coffee business, which is underrepresented in San Jose, also helped bolster the brand with consumers who wanted to support Ashaolu and Macey, their shop, and their mission to use “the power of coffee and tea to bring people together,” as stated on the shop’s website.

Much like Abu Salim, Nirvana Soul has to keep up with the demand once a certain menu item is shared on social media. “I have to check in with our baristas before I post any of our drinks, because whatever I post is typically the thing that we sell out that day,” she says. Their latest drink to sell out was the Serotonin Sunrise — a sparkling mix of jasmine tea, peach, and raspberry — when they ran out of tea. Ashaolu notes the bulk of its social media–generated sales still come from Instagram; but increasingly, creators will simultaneously post TikTok videos on their Instagram as reels for maximum reach, and FoodWithSoy’s video garnered 45,000 views on TikTok among 30 other user-generated videos, cross-pollinating and expanding the reach of Nirvana Soul.

Rae’s Got Cakes is a popular bakery in Oakland, known for “Tiny Tush” cake jars and elaborate cake decorations (like this Thanos ring hand inspired by the Marvel comic book hero). It’s also a Black woman–owned small business led by baker Rae Harris, which happened to have a viral moment. Alexis Frost, known by her username Ms. Frost, shared a TikTok review of Rae’s Got Cakes Tiny Tush cake jars after purchasing several flavors at the 626 Night Market to her follower base of more than 2 million. Harris noticed an instant surge in orders. “I had to go find that video, and I was like, this is where all these orders are coming from. I saw the effect before I even saw the video,” she says. The video received 241,000 views, which resulted in Harris selling 82 more jars than usual — about a 68 increase in sales.

According to Harris, the spike in business was welcome, but due to TikTok’s fast-moving algorithm, it only lasted a week. “That’s kind of the downside of TikTok. It’s like the algorithm overturns so fast, and you kind of miss that opportunity. You gotta wait for the next surge and viral video,” she says. In that period of waiting, Harris — who was already an avid TikTok creator making primarily cosplay videos on a personal account — decided to create a Rae’s Got Cakes TikTok page specifically for her food business. “It was great to have orders in the meantime, but because [Ms. Frost] didn’t have a business page to tag,” she says. “I didn’t get to reap the benefits of gaining a following.” The Rae’s Got Cakes business account currently only has 58 followers, though, with its quality cake content, it seems ripe for growth.

TikTok is an unpredictable landscape where the most random trends take off; there is no way to know what the next trend will be (frozen honey, anyone?). The algorithm tends to bode well for big chains, like Din Tai Fung, Popeyes, Starbucks, and Dunkin’, many of which have their own accounts, but also ride on a wave of user-generated content. Algorithms aside, top Bay Area influencers on the app like Tim Cheung, Paul Arihara, Preeti Gill, Mario, and Rob Willis consistently drive crowds to local eateries, although sometimes influencers are given free food or paid to post, which benefits businesses with more marketing dollars. Likewise, popular Bay Area spots like Stix and Boba Guys have used the app to reach a wider customer base, expanding content beyond the food to include cameos from staff members that highlight their personalities.

For Harris, the fast-moving algorithm is also very forgiving for new creators diving into the space; viral moment or not, she encourages small food business owners to put themselves out there. “Get on the screen in front of people and let people know you exist. It doesn’t need to be the fanciest or the most well-edited or like super cool video,” she says. “If people see your product, and they say, ‘Hey, that looks great,’ they’re gonna click through, they’re gonna click the link in the bio, and end up on your website.”