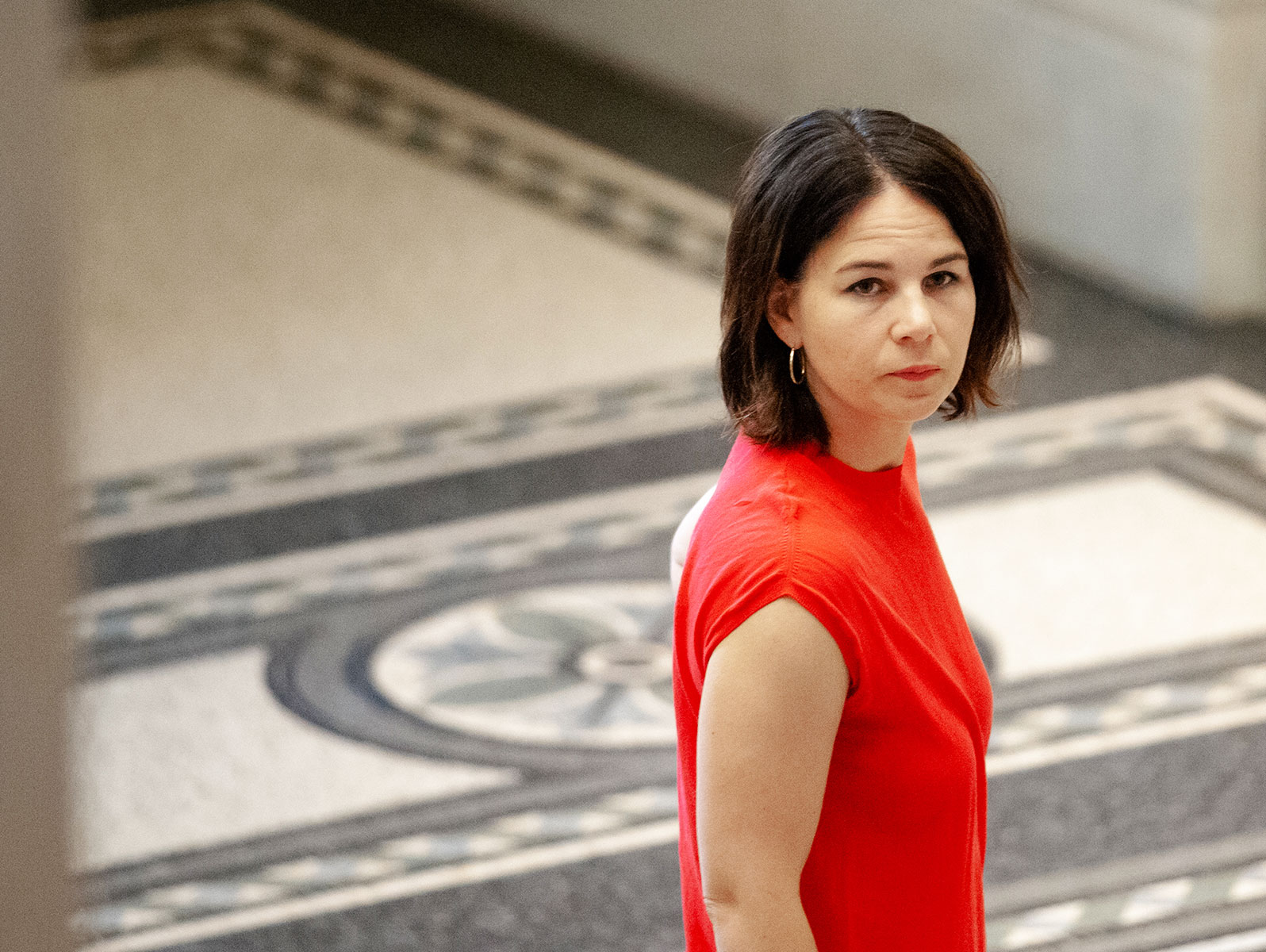 Angela Merkel has become a symbol of women’s success and self-assertion in a political arena still dominated by men, both in Germany and globally. Until a few months ago, the prospect of a female successor seemed very likely. But the initial euphoria, shortly after the Green Party named Annalena Baerbock as its candidate for the chancellorship, has died down.

Germany’s Greens Are Within Earshot of Power

In May, polls showed that 43% of the German population perceived Baerbock as a suitable successor for Merkel, leading over her two main contenders; at the end of August, this figure was down to 22%. Targeted online campaigns have been busy exploiting Baerbock’s missteps and stoking fears of political change among voters. These attacks have laid bare how modern political campaigns in the age of social media flush sexist attitudes that persist in both politics and the wider society to the surface.

Before Merkel rose to become one of the world’s most powerful female politicians, she was underestimated and belittled throughout the 1990s as a woman from East Germany by a male-dominated West German political class. Despite prevailing in intra-party struggles by often adapting to male behavior, she still had to face gender-based headwinds during her first general election campaign in 2005 as the front runner of her party.

The Christian Democratic Union/Christian Social Union (CDU/CSU) began the campaign polling at 48%, only to plummet to a sobering 35.2% on election day, securing a knife-edge victory over the incumbent, Chancellor Gerhard Schröder. Even back then, when social media was still a negligible factor, Merkel had to face partly overt, partly subliminal gender-discriminatory reporting. German media dissected Merkel’s outward appearance, starting with the corners of her mouth and her hairstyle and ending with her now-famous pantsuits.

According to Rita Süssmuth, president of the German Bundestag from 1988 to 1998, at times, “there was more discussion about hairstyle, outer appearance, facial expression, hands, etc. than there was debate about the content. And how often did the question come up: Can the girl do it?”

Her competence was called into doubt, as stereotypical headlines from the time show: “Angela Merkel — an angel of understanding kindness,” “A power woman … corpses pave her way.” In 2004, the Austrian newspaper Die Presse came to the following conclusion to the question of why Merkel had to face such inappropriate media scrutiny: “Because she is a woman and comes from the East. And that is not the stuff of political fantasies that make West German men’s clubs ecstatic.”

Even Merkel’s nickname, “Mutti” (mommy), used affectionately by most Germans now, was originally a derisive epithet. The slow reinterpretation of this nickname is emblematic of how difficult it is for women in politics to break away from antiquated role models.

Since then, Merkel has emerged victorious in four consecutive elections, at the moment the country’s second-longest serving chancellor after Helmut Kohl. She is one of the countless global role models who have proven women to be apt leaders. In light of this overwhelming evidence of women’s political prowess, the levels of sexism and disinformation launched against Baerbock are astonishing.

Targeted From Day One

When the Green Party chose Baerbock as its front runner in April, it did so with confidence that after 16 years of Angela Merkel, voters had shed their misgivings about aspiring female politicians. If anything, the Greens expected a young, energetic woman to embody political change and provide an appealing contrast to the stodgy, veteran, male candidates like Armin Laschet of the CDU and Olaf Scholz of the Social Democratic Party (SPD). But soon after the announcement of her candidacy, voices emerged online questioning whether a mother of two would be suitable for the chancellorship. However, it’s not just her status as a mother that made Baerbock an ideal target, especially for conservatives and far-right populists on the internet: Unlike Merkel, she is young, politically more inexperienced, liberal and green.

Adding to that, Baerbock exposed herself to criticism by making unforced mistakes. False statements in her CV, delayed declarations of supplementary income and alleged plagiarism in her book published in June provided further ammunition to her adversaries. Her book’s title,“Now. How We Renew Our Country,” and the criticism she faces mirror the Greens’ current dilemma. Before Baerbock could even communicate a new, innovative policy approach with climate protection at its center to the voters, public attention had already diverted to her shortcomings.

While part of the blame rests with Baerbock herself, a lack of proportionality of criticisms toward her as opposed to other contestants in this election is apparent. For more than a year now, accusations loom around her contender for the post of chancellor, Olaf Scholz. As finance minister and chairman of the Federal Financial Supervisory Authority, he is accused of failing to prevent the biggest accounting scandal in the history of the Federal Republic of Germany surrounding Wirecard AG, a payment processor and financial services provider. Luckily for Scholz, still-unanswered questions concerning the scandal receive scarce media attention, partly due to the complexity of the issue at hand making it harder to distill into bite-size news.

Armin Laschet, the CDU’s candidate for chancellorship and minister president of the state of North Rhine-Westphalia, had to navigate rough waters during the COVID-19 crisis. The state government used opaque procedures to award a contract for protective gowns worth €38.5 million ($45.6 million) to the luxury fashion manufacturer van Laack, a company linked to Laschet’s son. Laschet also received criticism for a good-humored appearance during a visit to areas affected by floods that killed at least 189 in July. In addition, he too was accused of plagiarism due to suspicious passages in a book published in 2009.

Even though Scholz’s, and especially Laschet’s missteps have not gone unnoticed by the media, the public and political opponents, Lothar Probst, a researcher at the University of Bremen, recognizes a systematic character in the criticism faced by Baerbock. In an interview with the German Press Agency, he surmised: “Her credibility, respectability, and authority are undermined, she is portrayed as sloppy. … A young, urban smart woman [is] once again tackled harder than her competitors.”

Even before Baerbock’s gaffes were in the spotlight, she found herself in the firing line. Conspiracy theories surfaced, suggesting that Baerbock was a puppet of George Soros and an advocate of the “great reset” conspiracy. Disinformation about Baerbock was also gender-based. Collages of sexualized images quickly circulated, including deepfake photographs disseminated via the messenger Telegram.

Such disinformation originated significantly from far-right circles. In 2019, according to the federal criminal police office, 77% of registered hate posts were attributable to the center-right and far-right political spectrum. According to political scientist Uwe Jun, from Trier University, female politicians from green parties are primary targets for right-wing attacks and disinformation because topics such as climate protection and emancipation inflame passions and mobilize the political right.

Baerbock’s political opponents and critics deny disproportionate criticism, insisting that she should have known what she had signed up for; after all, election campaigns are not for the faint-hearted, especially when entering the race as the front-runner. Yet statistics prove that in Germany, hatred toward female politicians is an everyday occurrence. A survey by Report München showed that 87% of the female politicians interviewed encountered hate and threats on an almost daily basis; 57% of these were sexist attacks.

These results are in line with international studies. In a 2019 report “#ShePersisted. Women, Politics & Power in the New Media World,” conducted by Lucina di Meco and Kristina Wilfore, 88 global female leaders were interviewed, most of whom were “concerned about the pervasiveness of gender-based abuse.” The study concluded that “A new wave of authoritarian leaders and illiberal actors around the world use gendered disinformation and online abuse to push back against the progress made on women’s and minority rights.”

A recent study from January, “Malign Creativity: How Gender, Sex, and Lies are Weaponized Against Women Online,” by the Woodrow Wilson International Center, also shows that 12 of the 13 surveyed female politicians suffered gendered abuse online. Nine of them were at the receiving end of gendered disinformation, containing racist, transphobic and sexual narratives, with the latter being the most common.

Sixteen years have passed between Angela Merkel’s and Annalena Baerbock’s first campaigns for the chancellorship. Today, women striving for power still have to deal with mistrust and gender-discriminatory prejudice. Merkel had to hold her own in a male-dominated environment where she was underestimated and often treated disparagingly. But compared to Merkel, the campaign against Baerbock has reached a new, unprecedented dimension. Merkel, who is childless, outwardly inconspicuous and politically more conservative, offered less of a target to conservative, male adversaries than the young, modern and progressive Baerbock.

Besides, Baerbock’s opponents in 2021 have more effective tools for spreading gendered disinformation on social media. While disinformation targets both male and female politicians, women are more affected. It aims to undermine women’s credibility and their chances of electoral success and discourage future generations of women from pursuing political careers. Germany’s female politicians must keep in mind that such disinformation is spread by distorted, unrepresentative groups that don’t reflect the social progress made over the years.

At this particular moment, it appears unlikely that Baerbock will move into the chancellor’s office as Merkel did in 2005 by the narrowest of margins. Yet the race is far from over, with nearly a month until election day. Baerbock’s recent performance in the first of three TV debates proves that she is not ready to abandon the field to (online) campaigners spreading gender-based prejudice and disinformation. Despite polls declaring Scholz as the debate’s winner, narrowly ahead of Baerbock, she presented herself as a modern and socioecological alternative to both her contenders and reverted attention to policy away from her persona and gender.