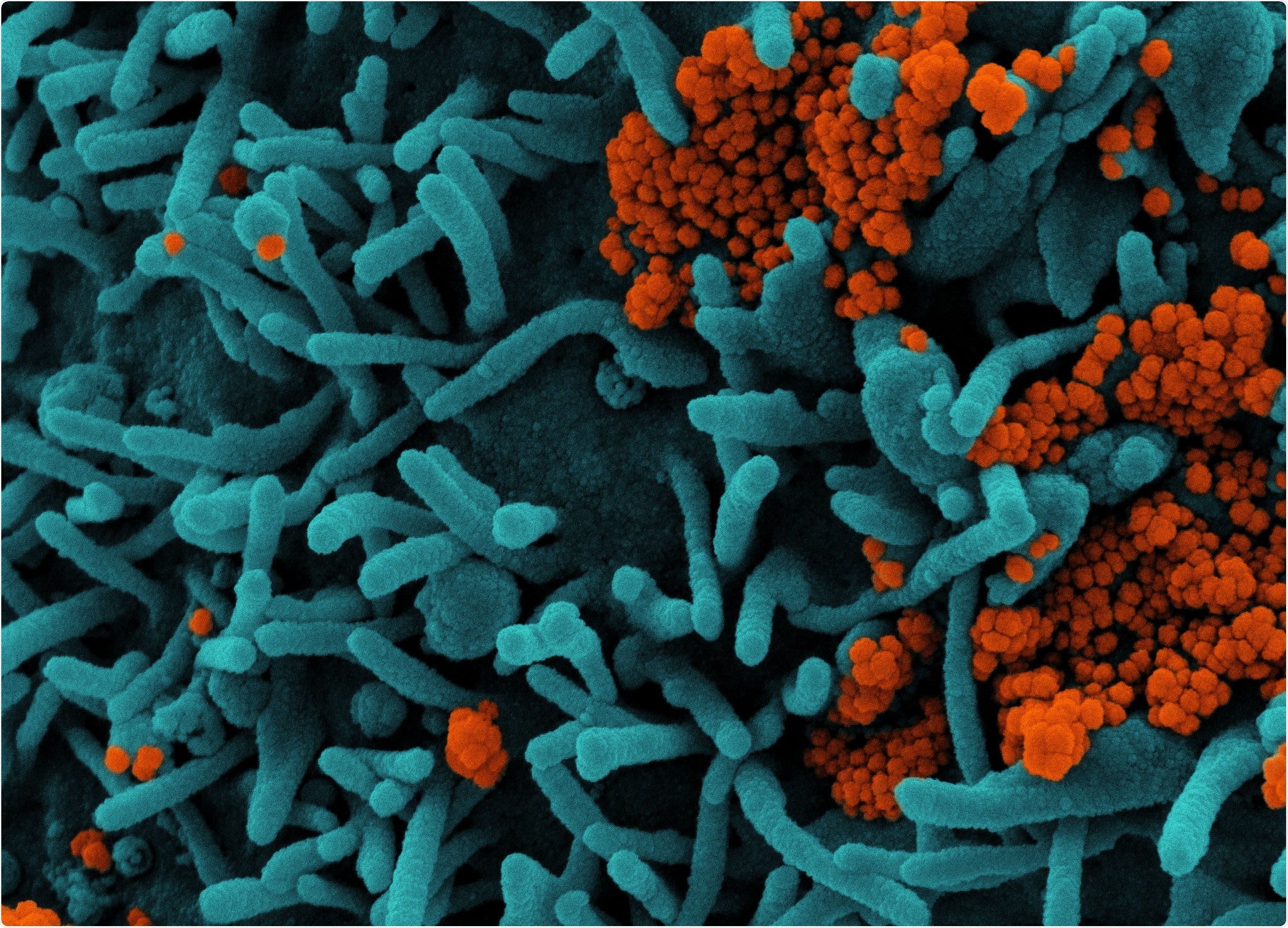 Numerous variants of the severe acute respiratory syndrome coronavirus 2 (SARS-CoV-2) have emerged over the last few months. Unfortunately, this has driven new coronavirus disease 2019 (COVID-19) waves, often more severe than before. A recent study posted to the medRxiv* preprint server discusses the characteristics of the variant that is responsible for this phenomenon.

The top four variants of concern (VOCs), as variants with greater transmissibility or infectivity are called, include the alpha, beta, gamma and delta, also designated as B.1.1.7, B.1.351, P.1, and B.1.617.2, respectively. While each was first detected in a specific region, they are now found on all continents inhabited by humans.

Both transmissibility and the ability to escape neutralization by antibodies elicited by natural infection caused by earlier variants, or vaccination, have contributed to the rapid and sustained spread of these variants. The alpha variant spreads 40% to 100% faster than the wild-type or Wuhan reference strain but without increased resistance to neutralizing antibodies or a higher risk of reinfection.

The beta variant is approximately 50% more transmissible but partially resists neutralization by convalescent sera. T cell responses may remain potent, however. The gamma variant is 70% to 140% more transmissible than the wild-type variant, and has a slight resistance to convalescent sera. However, reinfection may occur at up to 46% higher rates compared to the wild-type virus.

The delta variant is 60% more transmissible than the alpha variant, resists neutralization by convalescent sera to a moderate extent, and reduces vaccine efficacy to some extent, relative to the alpha variant.

Most COVID-19 vaccines available today show 70% or higher efficacy in protecting against symptomatic disease and almost complete immunity to death following infection with this virus. As variants spread, this protection may be reduced, mainly with the beta and also by the delta variant.

How was this study done?

The current study focused on projecting such outcomes from the phenotypic features of these VOCs against the complex background of other variants, other VOCs, and vaccination-induced antibodies.

Using a mathematical model, the researchers examined the consequences of the emergence and spread of various variants in the population, as observed during the middle of the epidemic, as well as the control of viral spread via various non-pharmaceutical interventions (NPIs) and vaccination.

Three VOCs were simulated, one with increased transmissibility, one with partial immune escape and the last with both. The total infections and the number of infections that would be reduced by vaccination were estimated. The effect of varying timepoints of vaccine rollout was also modeled on each variant.

Variations in the vaccine efficacy (VE), lowered vaccine coverage, or relaxation of NPIs after the coverage of a given percentage of the population was achieved. The aim was to compare how different variants fared as various control measures were relaxed.

The basic assumptions were a reproduction number of 2.5 for the wild-type, going down to 1.5 after NPIs, with a VE of 95% against the wild-type virus, reducing against the variants in proportion to the cross-reactivity between them.

What did the study show?

The researchers found that variants with higher transmissibility showed the highest frequency at the most significant rising rate. With some immune escape, the second variant infected fewer people than the wild-type and remained at a low frequency. 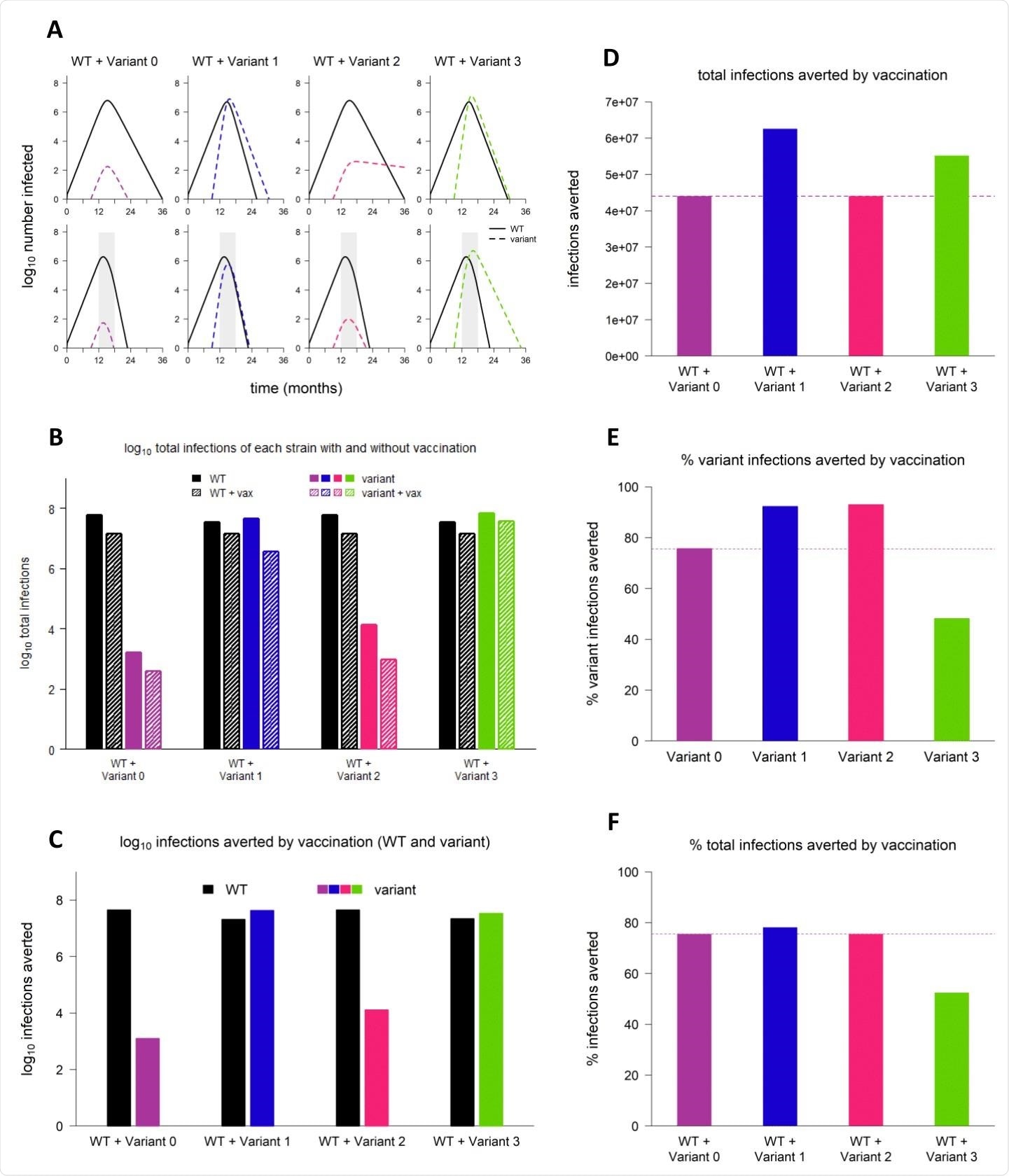 With vaccination, the first and second variants were rapidly controlled, and the rate of transmission for the third was reduced, though it was still able to spread. Thus, vaccination reduced more infections by the variants than with the wild-type variant. The first two variants were averted more than the third.

“Although immune escape reduces vaccine efficacy for the individual, it does not follow that an emerging variant with partial immune escape will significantly reduce the ability of vaccination to limit case numbers in a whole population.”

The presence of partial immune escape did not change the final epidemic size significantly, nor did it alter the impact of vaccination. The final number of infections was similar with the second variant and the wild-type, whenever vaccination was deployed unless the NPIs are significantly relaxed.

However, variants 1 and 3 were able to cause more infections than the wild-type, especially the third, due to its immune escape capability in addition to its greater transmissibility. As a result, the potential impact of the preventive measures such as NPIs and vaccination was greatest with these variants as well, by the number of infections averted, though not by percentage, relative to the wild-type.

When NPIs were relaxed, there was a significant increase in the number of infections only with the third variant, especially with early and rapid vaccine deployment. Efficient rollout led to more cases, and thus the rebound would be more intense with relaxed NPIs.

With only 50% vaccine coverage instead of 100%, the first and third variants were increased due to their increased transmissibility, especially with early and/or rapid rollout.

Finally, with less effective vaccines, variant 3 showed a significant increase in the number of cases due to the ability to evade antibodies as well as the higher transmissibility, especially when vaccines were deployed early and rapidly. With variant 1, a delayed rollout caused a greater increase in infections since it allowed more time before a high coverage was achieved.

What are the implications?

The researchers summed up: “Sufficiently weak control measures can lead to a second wave of infections with immune escape variants.” That is, when vaccination coverage is only half of the eligible population and NPIs are lifted at this point, with vaccine efficacy at 70%, many more infections were observed to result, especially with variant 2, despite its lower transmissibility, driving a second wave.

Most were probably milder because they were breakthroughs or reinfections. High immune escape promoted the spread of variants 2 and 3, with vaccination being largely ineffective at controlling their spread. However, it should be continued, along with NPIs, to limit the final size of the epidemic with variant 2, though this is of negligible effect with variant 3.

Overall, moderate-level immune escape is likely only to cause a surge of cases if coupled with higher transmissibility. Vaccination helps reduce the final epidemic size even with high levels of immune escape. High vaccine coverage and VE are necessary to keep infections low with more transmissible variants and/or resistant to neutralization.

Early vaccine rollout is more important than rapid deployment for all variants, especially when the transmissibility is higher because this pushes up the reproduction number.

While revealing the possible mechanisms of the rapid rise to dominance of both alpha and delta variants against the relatively low frequency of the beta variant, the study supplies a sound underlying hypothesis to both understand and predict the biological behavior of such variants and thus devise strategies to contain their spread. Mainly, it emphasizes the need for early vaccination of populations the world over to reduce the impact of VOCs on the final pandemic size.