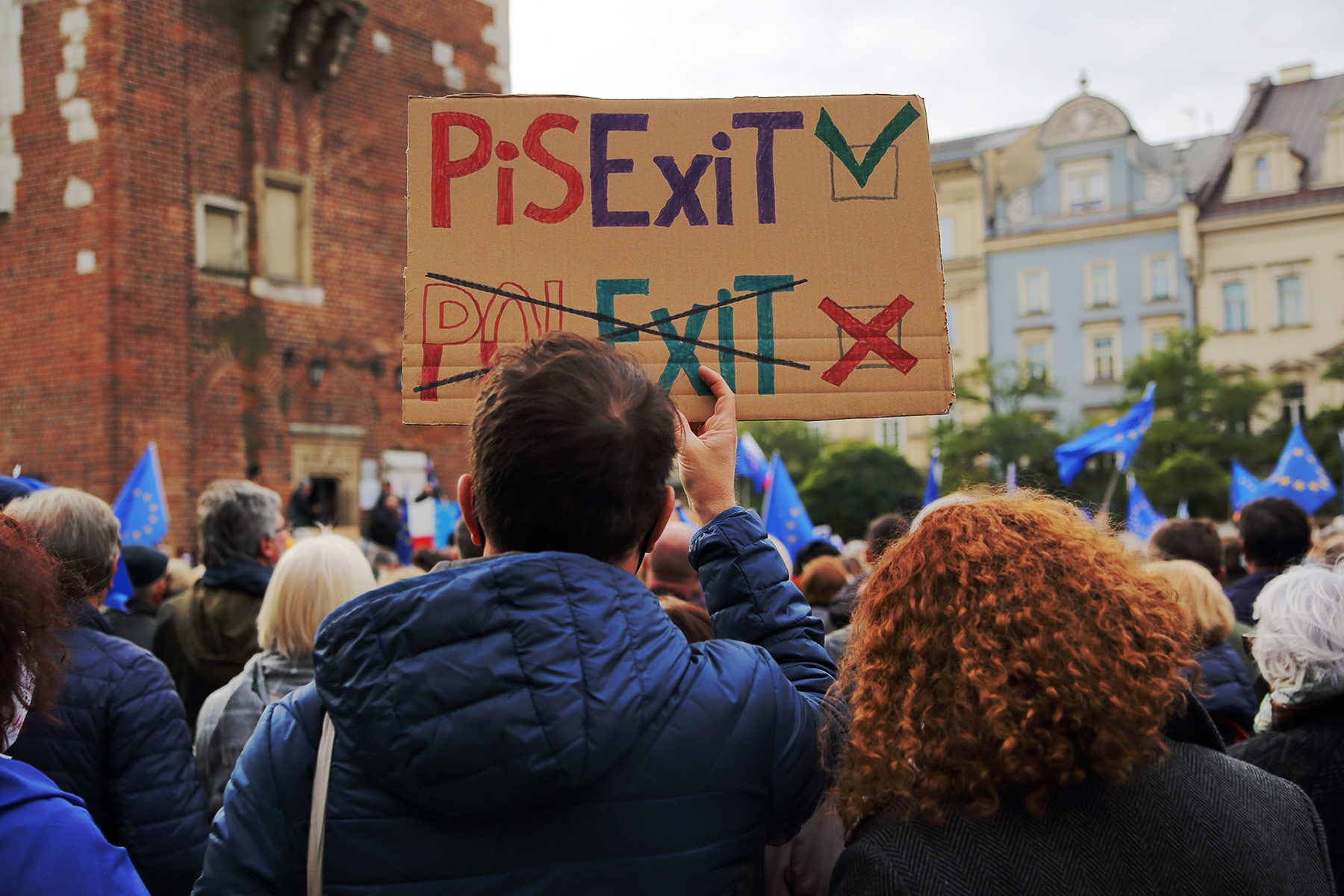 Recent judicial reforms in Poland have raised many questions, including whether the country may actually be on the way out of the European Union. Considering these recent developments, it might be tempting to draw a comparison with Brexit. But is Poland really following in the footsteps of the UK, or are we trying to compare apples and oranges?

Since 2015, when the Law and Justice party (PiS) came to power in Poland, the government has carried out broadly criticized reforms, which have deteriorated the quality of democracy, undermined the independence of the judiciary, and infringed upon media freedom. In response, the EU launched legal procedures against Warsaw, a first since the bloc’s inception.

The subsequent and long-lasting feud over the country’s controversial judicial reforms escalated further when Poland’s constitutional tribunal ruled in October that the Polish Constitution takes primacy over EU legislation. By doing so, the tribunal has challenged the European legal order and the foundations of European integration, giving Poland a carte blanche to ignore unfavorable decisions by the European Court of Justice (ECJ).

The move brought more than 100,000 Poles, encouraged by the opposition leader and former President of the European Council Donald Tusk, to the streets of Warsaw and over 100 cities around the country in protest against what they fear may lead to a “Polexit.”

Although the ruling has led some to speculate whether this could lead to Poland’s exit from the EU, it is important to note that the circumstances differ significantly from those that led to Brexit. The United Kingdom’s departure was the result of many factors that built up over many years. The UK was the second-largest net contributor to EU funds, while Poland is the single largest net receiver. For the UK, EU membership was almost purely based on economic pragmatism, and London persistently hindered deeper political unification. Notions of a common European identity simply did not resonate among the majority of the British public. Polish society, in contrast, is very pro-European.

Officially, not many Poles want a Polexit, not even the ruling conservative PiS. Over 80% believe that the country should remain in the EU, while only 7% want an exit. Paradoxically, the same society keeps electing a government that repeatedly drags it into conflicts with Brussels. PiS insists, however, that it has no such intentions and that it just wants to reduce the EU’s “interference” in the country’s affairs.

But not all MPs in the ruling coalition share this stance. Janusz Kowalski, a member of a junior coalition party, spoke openly about the possibility of a referendum in 2027, when the current EU budget will end and, with it, Poland’s favorable status. In his view, living costs and prices will become too high, making it too costly to remain in the EU. His statement was met with decisive and immediate criticism from PiS. After all, at the moment, no party that wants to win elections in Poland can support leaving the EU. If the referendum were held today, it would most probably result in PiS-Exit rather than Polexit.

Perhaps the only real similarity to Brexit that can be drawn here is that of the question of sovereignty. The British are acutely aware of the issue of parliamentary sovereignty, a concept stretching back many centuries whereupon the foundations of the British state were built. EU membership led to severe contentions as a result of the UK Parliament no longer being sovereign in all areas.

In Poland, on the other hand, the government seeks to distinguish itself from Brussels by its conservative position on a number of contentious social issues, namely abortion, LGBTQ+ rights, and migration. In doing so, Warsaw now draws upon its constitutional sovereignty as a bulwark against “interference.”

When Poland joined the EU, it wanted to “return to Europe.” The bloc was considered a promise of peace and additional protection from a potential Russian attempt to bring Poland back into its post-Soviet orbit. On its own, Poland would be too weak to counter Moscow’s attempts. This geopolitical factor is fundamental to EU membership, and it differs significantly between Poland and the UK. Poland’s proximity to Russia and its determination not to return to its sphere of influence largely ensures that it would never leave the EU by its own volition.

The UK, at the other end of Europe, is not confronted by such dilemmas. Unbound by land borders, Winston Churchill once said, “If Britain must choose between Europe and the open sea, she must always choose the open sea.” For Poland, the choice lies between Europe and an economic and political purgatory, somewhere between the EU and Russia, perhaps like Ukraine. Who would vote for that?

But by undermining EU law and its regulations, refusing to respect decisions of the ECJ, PiS may lead to a “legal Polexit” and a situation in which EU funds will be halted. Poland may become a passive member state: still in the union, but without voting rights and excluded from decision-making processes. Even if PiS is really against Polexit, it may be unintentionally preparing a favorable ground for it.

Brexit did not happen overnight. It was a sum of small steps, and Polexit, understood as a gradual process, cannot be ruled out completely. Hundreds of thousands go to pro-EU protests, but it is millions who vote, and PiS has many means to influence social attitudes at its disposal.

In the aftermath of government capture of public and regional media, information spread in these outlets has glorified the ruling coalition and fiercely attacked its critics, be they political opponents or the EU. The language used by some key representatives of PiS and its coalition partners does not leave any doubt about their stance toward the European Community.

The EU is a “Brussels occupant,” according to Marek Suski, head of the prime ministers’ cabinet. It imposes a “dictatorship of Brussels bureaucracy,” says Ryszard Terlecki, PiS parliamentary leader. It “wages a hybrid war against Poland” and “in its growing aggression aims at treating Poland like its colony,” according to Zbigniew Ziobro, the minister of justice. Just recently, Prime Minister Mateusz Morawiecki claimed that the EU “puts a gun against our heads” and warned that if Brussels puts pressure on Poland and resorts to withholding EU funds, it will inevitably lead to a “third world war.”

Moreover, the government makes use of populist rhetoric to further consolidate its power. It has weaponized migration crises, especially the current one on the border with Belarus, to incite fear, present itself as a defender of Europe and claim that the Western multiculturality has caused a rise of crime and terrorism. Even high-ranking politicians, including President Andrzej Duda, do not shy from using homophobic language and have turned a blind eye to the controversial “LGBT-free zones” to gain the support of the most conservative voters and representatives of the Catholic Church in Poland.

The EU’s protestation and pressure against the exclusion zones were interpreted as interference in “Polish traditions and value system.” In this context, the EU is regarded as a threat to traditional marriage between a man and a woman, and to children, whom it allegedly wants to “sexualize” during sexual education classes. Polish society is highly polarized, and PiS knows how to play that card to its advantage.

In the long-term, some conservative parties may change their discourse and, like the UK Independence Party, unabashedly and openly campaign for leaving the EU. This will be more probable when Polish citizens forget or have no personal experience of the times before the EU and are lured by the nostalgia of the proud history of the Polish-Lithuanian Commonwealth and the fight for national independence against the Brussels occupier.

If there are any lessons to be drawn from Brexit, it is that the EU must be seen to hear the concerns of the Polish government and people. Although it could be argued that Brexit was an inevitability, negative perceptions of Brussels among the British public made it easier to make their choice.

Geopolitics and economics ensure Poland’s continued EU membership, but the historical experience of the Polish people makes them extremely defensive and protective of their country, culture and borders. If the EU values Poland’s membership, it should continue to direct its efforts at addressing the Polish people in the language of support and friendship. This would strengthen the existing bond and reassure Poles that the EU does not work against them.

Brussels should also call out disinformation that drives anti-EU behavior — something it failed to do during the Brexit campaign. The EU did not convey clearly enough to the British people what advantages it brings and allowed itself to be perceived as an elitist political project.

Since attempts at dialogue by the EU have failed, a stronger reaction to the Polish government’s grandstanding may be necessary. If PiS gets away with its politics of undermining the EU, it will continue cementing its power and act even more audaciously. This time, the EU started acting more decisively by threatening to withhold EU funds.

The risk remains that PiS will repurpose this threat for the domestic audience to show how Brussels excludes Poland, which may, in turn, instigate anti-EU sentiment. The debate on the rule of law in Poland was held in the European Parliament to approach this challenge, concluding the need to draw a clear line between the Poles and their government, emphasizing support for Polish civil society.

Can the EU stand the test of another exit? Is it not the common interest of Poland and the EU that history does not repeat itself? The answer is yes, and the ball is in the Polish court.

*[Fair Observer is a media partner of Institute for the Danube Region and Central Europe.]