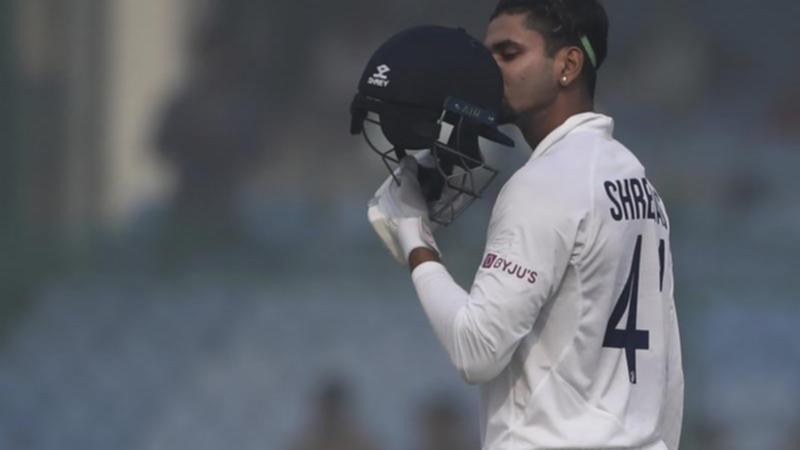 India’s Shreyas Iyer has scored a century on his Test debut but New Zealand spearhead Tim Southee’s five-wicket haul restricted the hosts to 8-339 at lunch on day two of the first Test in Kanpur.

Iyer made 105 before falling to Southee, whose 13th five-wicket haul in Test cricket came on a pitch where New Zealand’s three-pronged spin attack is yet to taste success.

For the hosts, Ravichandran Ashwin was unbeaten on 38 at the break with Umesh Yadav on four at Green Park Stadium on Friday.

Earlier, after India resumed day two on 4-258, Southee (5-69) ensured New Zealand did not have to wait long for a breakthrough.

Ravindra Jadeja survived a close lbw appeal but could not add to his overnight score of 50 and departed after deflecting a Southee delivery onto his stumps.

Jadeja was livid with himself after the dismissal but his 121-run fifth-wicket partnership with Iyer had rescued India from a mid-innings wobble.

While Jadeja looked ill at ease, Iyer was fluent at the other end and hit Kyle Jamieson for back-to-back boundaries.

The 26-year-old took two runs off Jamieson to bring up his hundred, a milestone he celebrated by kissing his helmet and raising his arms while the sparse crowd in the stadium cheered.

Southee continued to chip away at the other end, dismissing Wriddhiman Saha caught behind for one.

Iyer also fell to the seamer, playing a lazy drive that was pouched by Will Young. It was a tame end to an otherwise stellar innings studded with two sixes and 13 boundaries.