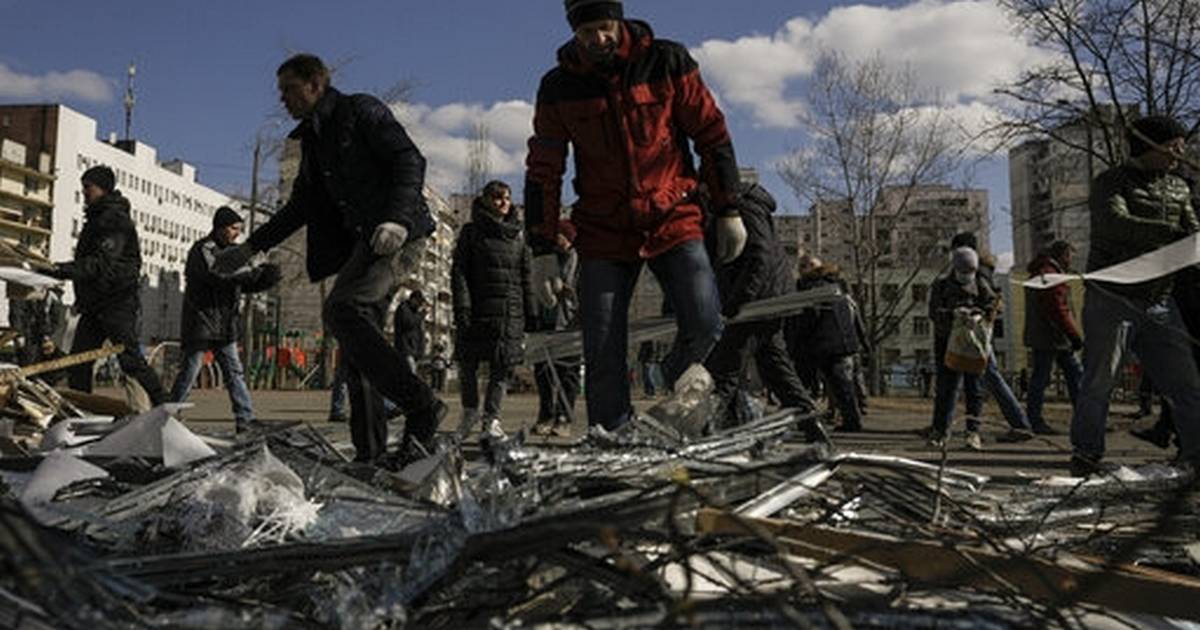 Russia’s invasion of Ukraine entered its fourth week on Thursday, with Russian forces largely bogged down outside major cities and shelling them from a distance, raining havoc on civilians.

In the besieged southern city of Mariupol, a Russian airstrike destroyed a theater where hundreds of people were sheltering, burying many of them in the rubble, Ukrainian officials said. They said the number of casualties in the Wednesday attack was unclear as the entrance was blocked by debris.

The strike came as Ukrainian President Volodymyr Zelenskyy invoked 9/11 during an urgent appeal to the U.S. Congress for more weapons to stem the Russian assault. U.S. President Joe Biden announced an additional $800 million for Ukraine’s military and said Russian President Vladimir Putin is a ‘war criminal.’

Putin meanwhile warned against attempts by the West and his Russian opponents to bring about the ‘destruction of Russia,” signaling an even greater crackdown on opposition to the war.

He said Russians ‘will always be able to distinguish true patriots from scum and traitors and will simply spit them out like a gnat that accidentally flew into their mouths.’

The fighting has led more than 3 million people to flee Ukraine, the U.N. estimates. The death toll remains unknown, though Ukraine has said thousands of civilians have died.

Here are some key things to know about the conflict:

WHAT IS HAPPENING ON THE GROUND?

Ukrainian Foreign Minister Dmytro Kuleba said the attack on the theater in Mariupol is a ‘horrendous war crime.’ Satellite imagery from the Maxar space technology firm showed the word ‘CHILDREN’ written in large white letters in Russian in front of and behind the building.

Pavlo Kyrylenko, the head of the Donetsk regional administration wrote on Telegram late Wednesday that ‘several hundred’ residents were sheltering in the Drama Theater when it was hit and that the entrance is buried under rubble. The official said the airstrike also hit the Neptune swimming pool complex, burying women and children.

The Russian Defense Ministry denied bombing any targets in Mariupol on Wednesday.

A fire broke out in an apartment building in the capital, Kyiv, early Thursday after it was hit by the remnants of a downed Russian rocket, killing one person and injuring at least three others, according to emergency services.

Ten people were killed Wednesday while standing in line for bread in the northern city of Chernihiv, the Ukrainian General Prosecutor’s Office said. Maxar images showed Russian artillery and multiple-rocket launchers deployed on the outskirts of Chernihiv, aimed at the city.

WHAT HAS THE AP DIRECTLY WITNESSED OR CONFIRMED?

In Mariupol, workers afraid for their own lives braved relentless shelling to dump the bodies of children in a mass grave. Local officials have tallied 2,500 deaths in the siege, but many bodies crushed in the rubble can’t be counted because of the assault.

Bodies lie out in the street. Workers tell families to leave their dead outside because it’s too dangerous to hold funerals.

In Kharkiv, doctors are struggling to treat COVID-19 patients as the bombs fall outside. Several times a day, air raid sirens wail at a local hospital, sending virus patients – some connected to ventilators and struggling to breathe – into bomb shelters.

‘Bombing takes place from morning into night,” hospital director Dr. Pavel Nartov said. ‘It could hit at any time.’

WHAT DETAILS HAVE EMERGED FROM NEGOTIATIONS BETWEEN RUSSIA AND UKRAINE?

Zelenskyy’s adviser Mikhailo Podolyak said Ukraine is demanding a cease-fire, the withdrawal of Russian troops and legal security guarantees for Ukraine from a number of countries. Ukrainian and Russian delegations held talks again Wednesday by video.

Another official in Zelenskyy’s office, speaking on condition of anonymity because of the sensitivity of the talks, said the main subject under discussion was whether Russian troops would remain in separatist regions in eastern Ukraine after the war and where the borders would be.

Just before the war, Russia recognized the independence of two regions controlled by Russian-backed separatists since 2014 and extended the borders of those regions to areas Ukraine had continued to hold, including Mariupol.

HOW IS THE WORLD RESPONDING TO THE WAR?

Six Western nations have called for a U.N. Security Council meeting on Ukraine on Thursday. The United Kingdom’s U.N. Mission tweeted Wednesday that ‘Russia is committing war crimes and targeting civilians. Russia’s illegal war on Ukraine is a threat to us all.’

The mission said the meeting was requested by six Security Council members and posted their flags — the U.K., United States, France, Ireland, Norway and Albania. It has not yet been officially scheduled.

Zelenskyy acknowledged in his speech to the U.S. Congress that the no-fly zone he has sought to ‘close the sky’ over his country may not happen. Still, he said the U.S. must sanction Russian lawmakers and block imports, in addition to providing military assistance.

‘We need you right now,’ Zelenskyy said in remarks livestreamed to the U.S. Capitol, which were punctuated with a graphic video showing the grisly aftermath of the invasion.

Biden announced that the U.S. is sending an additional $800 million in military assistance – including anti-aircraft and anti-armor weapons and drones – to Ukraine, making a total of $2 billion in such aid sent to Kyiv since Biden took office more than a year ago.

Biden also plans to travel to Europe next week for talks with European leaders about the Russian invasion, and will attend an extraordinary NATO summit in Brussels. NATO has been bolstering its eastern flank with troops and equipment to deter Russia from invading any of its members.

Follow the AP’s coverage of the war between Russia and Ukraine: http://apnews.com/hub/russia-ukraine