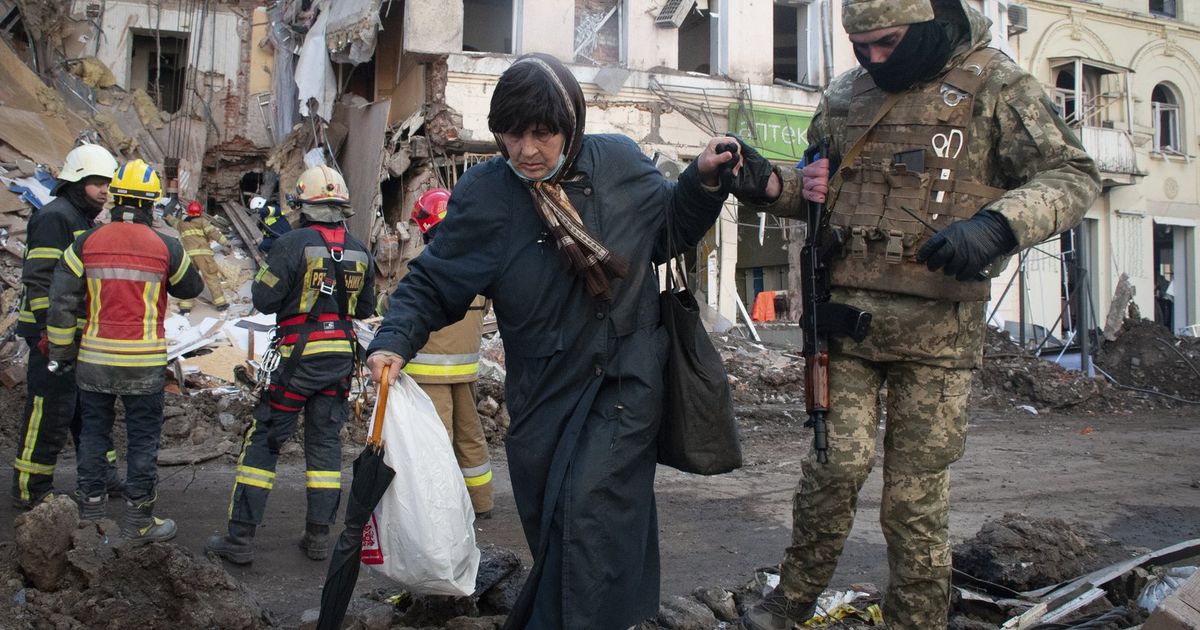 During a visit to the Polish capital, Defense Secretary Ben Wallace said the United Kingdom is sending the Sky Sabre medium-range anti-air missile system to Poland with about 100 personnel. He said the move is “to make sure that we stand alongside Poland in protecting her airspace from any further aggression from Russia.”

The decision comes days after Russian missiles struck a military base in Yavoriv, Ukraine, just a few miles from the border with Poland.

The British promise of military support also comes as nearly 2 million of the more than 3 million refugees to flee Ukraine have arrived in Poland.

“As a NATO ally and a very old ally, it is very right that Britain stands by Poland as Poland carries much of the burden of the consequence of this war and stands tall and brave to stand up to the threats from Russia,” Wallace said.

KEY DEVELOPMENTS IN THE RUSSIA-UKRAINE WAR:

— U.N. Security Council to meet ahead of vote on Russian humanitarian resolution

— Biden flatly calls Putin a war criminal, but investigations for determining that have only begun

— Palestinians with Ukraine ties empathize with victims of war

— Go to https://apnews.com/hub/russia-ukraine for more coverage

MOSCOW — Kremlin spokesman Dmitry Peskov says Moscow “can’t take into account” the ruling of the International Court of Justice that ordered Russia to halt its operation in Ukraine.

During his daily conference call with reporters, Peskov noted that both sides need to agree on implementing the ruling, and on Russia’s side “there can be no consent.”

Peskov also said that talks between Russia and Ukraine will continue on Thursday in some form. “I don’t know if they are already underway or not, but they should be today, in one direction or another,” Peskov said.

The Kremlin spokesman stressed that the Russian delegation is ready to work 24/7 and claimed that “unfortunately, we don’t see the same zeal on Ukrainian side.”

VILNIUS, Lithuania — Lithuania’s parliament has unanimously adopted a resolution calling for a no-fly zone over Ukraine, joining countries including Estonia and Slovenia in the appeal.

The resolution said a no-fly zone would allow United Nations peacekeepers to ensure the security of humanitarian corridors and the safety of Ukraine’s nuclear power plants and nuclear waste storage facilities.

NATO has categorically ruled out any role for the military alliance in setting up and policing a no-fly zone over Ukraine to protect against Russian airstrikes on Ukraine. On Wednesday, NATO Secretary-General Jens Stoltenberg said “this can become even worse if NATO (takes) actions that actually turned this into a full-fledged war between NATO and Russia.”

Prime Minister Janez Jansa of Slovenia has publicly called for a no-fly zone and Estonia’s Parliament also has urged its 29 NATO partners to consider the same.

BEIJING — A Chinese Commerce Ministry official says Beijing will take “necessary measures” to protect Chinese companies from actions by other governments related to sanctions against Russia.

The comment was in response to questions about a U.S. warning of “consequences” for any moves by Chinese companies to skirt such sanctions.

“The imposition of economic sanctions will not only fail to solve security problems, but will also harm the normal lives of the people in the relevant countries, disrupt the global market, and make the already slowing world economy even worse,” Gao said Thursday.

He said China will take necessary measures to safeguard the normal trade interests and legitimate rights and interests of Chinese companies. He gave no details.

Social Affairs Minister Lena Hallengren said just over a third of Ukraine’s population has received two doses of the vaccine. “It is of the utmost importance that as many as possible who come as refugees to Sweden get vaccinated as soon as possible,” she said.

“It is about protecting oneself but also about strengthening Sweden,” she added.

Earlier this month, Swedish authorities estimated that about 4,000 Ukrainian refugees arrive in Sweden every day.

Zelenskyy’s office did not report casualties for the latest strikes. They come amid rescue efforts in the city after a theater where hundreds had been sheltering was destroyed Wednesday in what Ukrainian authorities say was a Russian air strike.

“People are escaping from Mariupol by themselves using their own transport,” Zelenskyy’s office said, adding the “risk of death remains high” because of Russian forces previously firing on civilians.

The presidential office also reported artillery and air strikes around the country overnight, including in the Kalynivka and Brovary suburbs of the capital, Kyiv. It said fighting continues as Russian forces try to enter the Ukraine-held city of Mykolaiv in the south and that there was an artillery barrage through the night in the eastern town of Avdiivka.

Ukraine says Russian forces are increasingly resorting to artillery and air strikes as their advance stalls.

The Ukrainian General Staff says “the enemy, without success in its ground operation, continues to carry out rocket and bomb attacks on infrastructure and highly populated areas of Ukrainian cities.”

BANGKOK — A U.N. agency is warning that the conflict in Ukraine is likely to hinder access to food and fuel for many of the world’s most vulnerable people.

A report by the United Nations Conference on Trade and Development notes that Russia accounted for nearly a third of wheat imports for Africa, or $3.7 billion, in 2018-2020, while 12%, worth $1.4 billion, came from Ukraine.

The report said initial assessments point to a “substantive reduction” in access to food and fuel despite efforts to prevent disruptions of supplies of key commodities such as wheat. Meanwhile, rising costs for shipping and for grains and other staple foods is pushing prices higher, hitting poorest people the hardest, the report says.

The report said up to 25 African countries, especially the least developed economies, relied on wheat imports from Russia and Ukraine. The lack of spare capacity in Africa limits the ability of those countries to offset any lost supplies, while surging costs for fertilizer will be an extra burden for farmers.

BERLIN — Ukrainian President Volodymyr Zelenskyy has accused Germany of putting its economy before his country’s security in the run-up to the Russian invasion.

In an address to Germany’s parliament Thursday, Zelenskyy criticized the German government’s support for the Nord Stream 2 pipeline project meant to bring natural gas from Russia. Ukraine and others had opposed the project, warning that it endangered Ukrainian and European security.

Zelenskyy also noted Germany’s hesitancy when it came to imposing some of the toughest sanctions on Russia for fear it could hurt the German economy.

The Ukrainian president called on Germany not to let a new wall divide Europe, urging support for his country’s membership of NATO and the European Union.

He also called for more help for his country, saying thousands of people have been killed in the war that started almost a month ago, including 108 children.

Referring to the dire situation in the besieged city of Mariupol, he said: “Everything is a target for them,” including “a theater where hundreds of people found shelter that was flattened yesterday.”

The Ministry of Defence says Russian forces have made “minimal progress” on land, sea or air in recent days, and are suffering heavy losses.

In an intelligence update on social media. It says Ukrainian resistance remains “staunch and well-coordinated.” It says most of Ukraine’s territory, including all major cities, remains in Ukraine’s hands.

KYIV, Ukraine — Ukrainian officials say the status of people sheltering in a theater in Mariupol is still uncertain because the entrance was under the rubble caused by a Russian airstrike.

Pavlo Kyrylenko, head of the Donetsk regional administration, said on Telegram on Wednesday evening that “several hundred” residents of Mariupol were sheltering in the Drama Theater. He rejected the claims by the Russian military that the Azov battalion was headquartered in the theater, stressing that “only civilians” were in it when it was struck earlier Wednesday.

Kyrylenko said the airstrike also hit the Neptune swimming pool complex. “Now there are pregnant women and women with children under the rubble there. It’s pure terrorism!” the official said.

At least as recently as Monday, the pavement outside the once-elegant theater was marked with huge white letters spelling out “CHILDREN” in Russian, according to images released by the Maxar space technology company.

LVIV, Ukraine — Russian forces freed the mayor of the Ukrainian city of Melitopol in exchange for nine of their captured conscripts, an official from Ukraine’s presidential office said Wednesday.

Kyiv accused the Russians of kidnapping Mayor Ivan Fedorov about a week ago. Surveillance video showed him being marched out of city hall apparently surrounded by Russian soldiers.

Residents of Melitopol, a city in southeast currently under Russian control, have been protesting to demand his release.

Daria Zarivna, spokeswoman of the head of Ukraine’s president’s office, said Wednesday that Fedorov has been released from captivity, and Russia “got nine of its captive soldiers, born in 2002-2003, practically children, conscripts Russia’s Defense Ministry said weren’t there.”

Moscow initially denied sending conscripts to fight in Ukraine, but later the Russian military admitted that some conscripts have been involved in the offensive and even got captured by Ukrainian forces.

UNITED NATIONS — The U.N. Security Council will meet Thursday at the request of six Western nations that sought an open session on Ukraine ahead of an expected vote on a Russian humanitarian resolution that they have sharply criticized for making no mention of Moscow’s war against its smaller neighbor.

“Russia is committing war crimes and targeting civilians. Russia’s illegal war on Ukraine is a threat to us all,” tweeted the U.N. mission of the United Kingdom, one of the six countries that requested the meeting.

Russia circulated a proposed Security Council resolution Tuesday that would demand protection for civilians “in vulnerable situations” in Ukraine and safe passage for humanitarian aid and people seeking to leave the country but without mentioning the war or the parties concerned.

The resolution is expected to be voted on by the council Friday.

“This is possible only through direct dialogue” between Zelenskyy and Russian President Vladimir Putin, he said on Twitter.

An official in Zelenskyy’s office told The Associated Press the main subject under discussion was whether Russian troops would remain in separatist regions in eastern Ukraine after the war and where the borders would be.

Just before the war, Russia recognized the independence of two regions controlled by Russian-backed separatists since 2014. It also extended the borders of those regions to areas Ukraine had continued to hold, including Mariupol, a port city now under siege.

The official, speaking on condition of anonymity to discuss the sensitive talks, said Ukraine was insisting on the inclusion of one or more Western nuclear powers in the negotiations and on the signing of a legally binding document with security guarantees for Ukraine. In exchange, the official said, Ukraine was ready to discuss a neutral status.

Russia has demanded that NATO pledge never to admit Ukraine to the alliance or station forces there.

PANAMA CITY — Three Panama-flagged ships have been hit by Russian missiles in the Black Sea during Russia’s war in Ukraine and one sank, Panamanian authorities said Wednesday.

The crews of the ships “are safe,” Maritime Authority Director Noriel Araúz said.

The ship that sank was the Helt, but Araúz did not say when that occurred. The others hit were the Lord Nelson and Namura Queen. Panamanian officials previously said the Namura Queen, owned by a Japanese company and operated by a firm in the Philippines, was hit in February.

Araúz said 10 Panama-flagged ships were in the Black Sea, including the three hit. Combined they have about 150 crew members of various nationalities who have not been allowed to leave, he said.

“We are in constant communication with the ships … because we know that the Russian navy is not letting them leave the Black Sea,”Araúz said.

Panama leads the world in registered merchant ships and has advised its merchant fleet to be on high alert in Ukrainian and Russian waters.