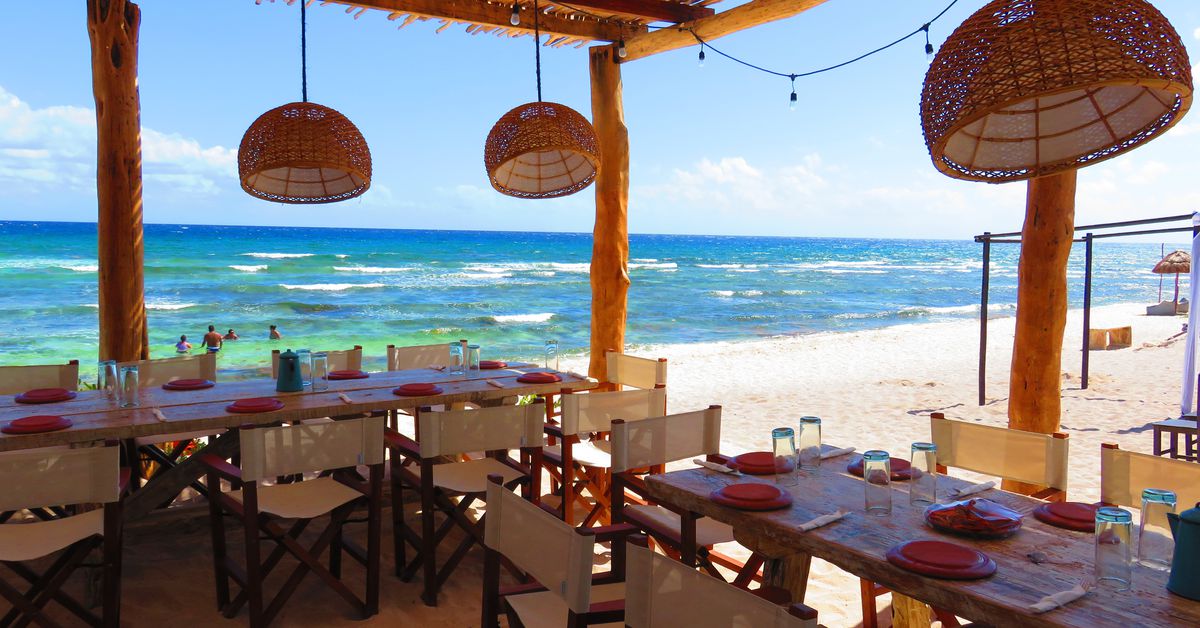 Remember places? I don’t! I know travel is back for some, and plenty of my friends have flown internationally now that vaccines are readily available, but I have not been anywhere new since summer 2019. I had to look back through my calendar to figure that out, and now I’m depressed anew, mostly because I’ve been stripped of one of the great joys of travel — stumbling into random restaurants and seeing what kind of meal I’ll have. For now, I’ll have to live vicariously through @_restaurant_bot.

The Twitter account, which was created in October 2020, automatically tweets a random restaurant’s name, location, and four images from its Google listing every hour or so. On a quick scroll right now, there’s a platter of fish heaped with herbs and lime in Laos, a feast of meat and chicharrones in El Salvador, and a cheese plate in a cozy, wood-paneled dining room in France. Some photos focus on the food, close-ups of steam trays or charcuterie plates; others are scrubbed from whatever citizen travelers decided to upload on Google while nearby — selfies with drinks, friends posing with their cars presumably before or after their meal. In Mauritania, a man smiles with a child on his shoulders. In the Philippines, there’s a parade followed by a wedding. There are also a lot of Pizza Huts.

I have found myself in deep scrolling spirals over Random Restaurant, at first curious to see if anything looked good, then to see if the bot picked up anywhere I’ve been, and then just to see. Places I never would have gone — a Chinese restaurant serving orange chicken in Mexico, a sushi restaurant in Russia that pipes some sort of pink cream onto the rolls — suddenly seemed like essential experiences I was missing out on. (Like, what is that pink cream and why on earth would they put it on sushi? I won’t rest until I know!) It’s not like I was ever going to plan a vacation around a pizzeria in Paraguay, but more that I became acutely aware of how small my world has become.

In an essay published in Meanjin Quarterly, writer Dan Dixon gets at why the bot is so captivating, both during the pandemic and in our general, social media-driven world. “On an internet that craves ever-narrowing curation, an algorithm that does not adapt to a user’s interest, along with the seeming absence of the human element, constitutes a minor act of resistance,” he writes. Nothing in my life has invited Twitter to think I’d want to see a Google Streetview shot of a chicken restaurant in Lebanon, but here we are. “Because of the internet’s ubiquity, I do not stumble across restaurants. Before walking through the door, I’ve seen their star rating on Google, maybe checked some websites I trust for their verdicts, seen the menu and maybe their Instagram. I live this way with considerable regret, revelling in neoliberalism’s punishing vision: optimise or die.”

I, too, can’t remember the last time I went to a restaurant without checking out its outdoor dining setup on Instagram, or without making a reservation because I don’t want to find myself having to kill time when my regular plan of popping into a random adjacent bar feels not quite safe yet. It’s been weeks since I ate somewhere that wasn’t my neighborhood or a meal at a friend’s house, and I worry that, were COVID to disappear tomorrow and I could go anywhere again, I would be too overwhelmed to even begin.

But unlike Dixon, I do not think the bleak optimization of the restaurant experience is inevitable. Random Restaurant doesn’t remind me of a world that’s lost to time and smartphones, but one that is still waiting for me. Worried as I am, I can still conjure the feeling of coaxing my partner into a sequestered seafood bar in Valencia, “just to see,” and having the best sardines I’ve ever tasted. I remember walking into a roadside restaurant next to a bus stop in Sri Lanka and eating jackfruit curry out of a clay pot. Or, more simply, going into a midtown deli and getting a way better BEC than I expected. Random Restaurant lets you travel the world, but also let it remind you that this could be you, sitting at a plastic table, eating fries at a place with no Instagram presence. Somewhere.