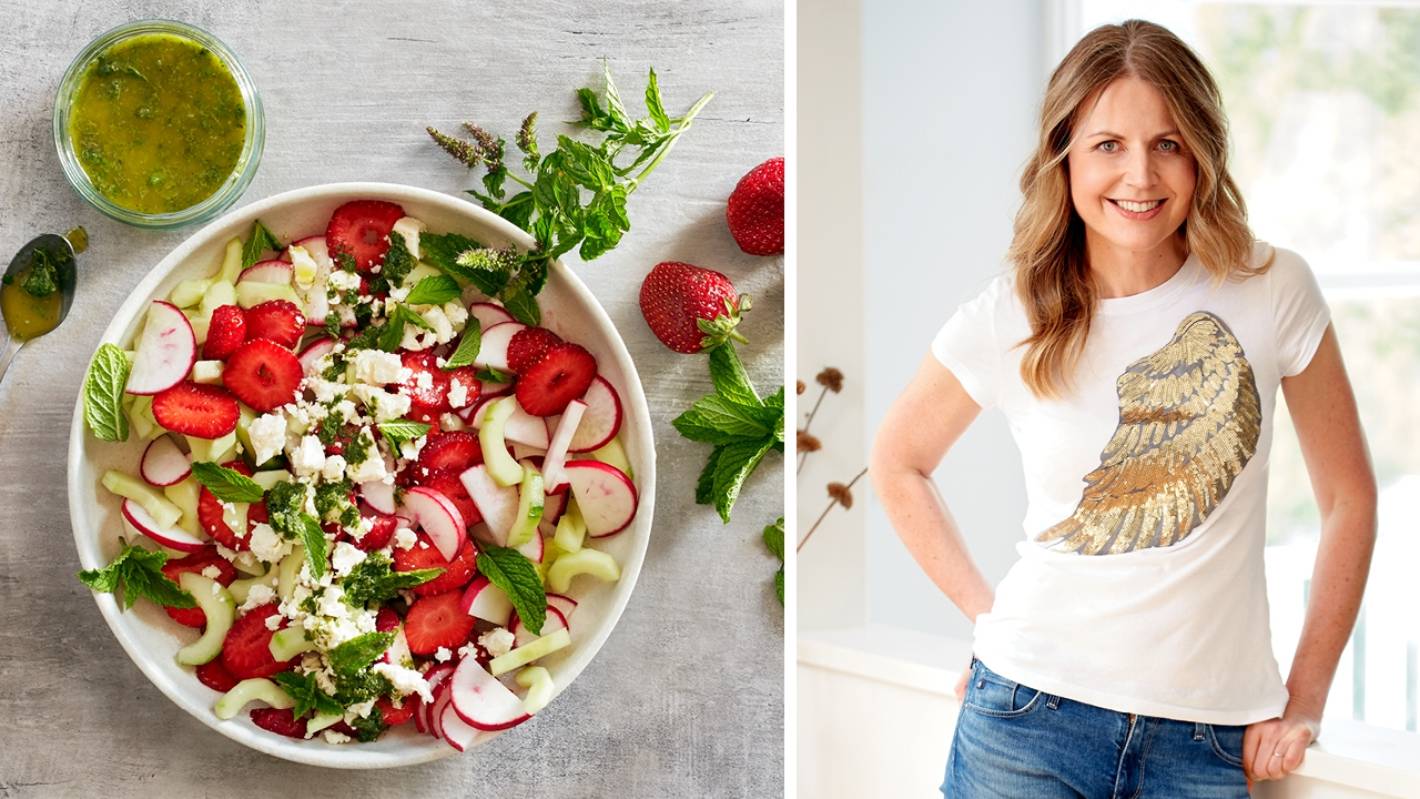 Lucy Corry, author of new book Homecooked, reflects on a life in food.

Atiamuri, 1984: I get off the school bus and trudge up the long driveway through the front paddock. As I walk, I wonder what’s going to be for dinner. It seems a long time since lunch, a white bread sandwich containing slices of cold sausage and Mum’s famous tomato sauce. I push open the front door: “Muuum, I’m home”. There’s no reply, but I know she must be here because the house is full of rich, brown, savoury aromas. I walk into the kitchen and even though she’s not in the room she knows exactly what I’m about to do. Suddenly her voice materialises like the omniscient narrator: “Don’t lift the lid of the Crockpot!”.

I am 10 years old and profoundly lucky to be growing up in a family that prioritises good food. We live on a south Waikato sheep farm, but my parents have culinary tastes – and expectations – that go far beyond meat and three veg. I’m often ashamed of this at primary school, where everyone else eats much less exotically. No one else’s father specialises in a fiery Portuguese chicken dish that turns the kitchen into a bombsite, no one else’s mother makes chicken a la King, chao fan, or ‘something out of my head’ that often involves the Crockpot.

In Standard 3, an Australian teacher on exchange asks my class what we’d had for dinner the night before. I squirm with embarrassment before confessing we’d had ‘King of the Mountain’ soup; meatballs in a savoury broth. Mr Saunders, the teacher, pushes me for more detail. I blush furiously while I explain that it’s “sort of like cazuela” (a Chilean dish we eat often). Mr Saunders is not sensitive to my mortification and asks question after question. When I tell Mum about this after school she invites Mr Saunders to have cazuela with us on Sunday. Food, my mother understood, was much more than physical sustenance; it was creativity, cultural learning and a way to bring people together.

Wellington, 1994: I’m in my second year at university, living in a grotty inner city flat with four others. I clean houses and work in cafes to pay the rent. Our kitchen is so small only two of us can fit in it at a time and none of us have any money. We don’t have a dining table either, but we do cook and eat together most nights, instead of being one of those flats where people jealously guard ingredients in locked cupboards.

Flatmate Tania moves in with a file full of typed recipes from her mother, which means we eat Maggi cook in the pot Apricot chicken at least once a fortnight. I make a lot of ‘impossible quiche’ (an onion, some eggs, a splash of milk and whatever can be foraged from the fridge). The vegetarian shepherd’s pie from Alison Holst’s Meals Without Meat is another constant.

Flatmate Ben usually cooks saveloys when it’s his turn, but we forgive him because from a distance he looks like Keanu Reeves. At some point in this year of learning to be grown-ups, flatmate Geoff’s dad gives us some recently shot wild venison and we decide to throw a dinner party. I’ve recently discovered the Moosewood Cookbook and decide to make hummus from scratch, despite a) not soaking the chickpeas for long enough and b) not having a blender. Someone makes chocolate mousse, everyone brings cheap red wine. The hummus is an unmitigated disaster but the dinner party is a roaring success. It’s an object lesson in the strength of food as social glue – and one that comes in very handy in more than a dozen flats in the decade to come.

Hamilton, 2004: I’m newly married and working at the Waikato Times as a feature writer, which includes editing its new ‘lifestyle’ supplement. This is much more my style than my previous gig on the police desk at The Dominion, where the exasperated chief reporter told my colleague and I we should give the local sergeants chocolate biscuits in return for intel. Then, the closest I’d gotten to food writing was when editor Richard Long dispatched me to write about dining at Two Rooms, a Miramar restaurant in the news for banning women diners drenched in perfume. I’m similarly lucky at the Times, where my wonderful boss, Denise Irvine, gives me free rein to pretty much write about what interests me.

Among other things, I edit recipe content submitted by a range of contributors and I experience, first-hand, the wrath of readers if we make a (rare) mistake in a recipe. One day an irate man drives out to the Times’ office with a plate of biscuits, accompanied by a handwritten note in angry capitals to prove to us that the recipe is a dud.

It turns out to be quite a tale of woe: the man’s wife has been in hospital so he makes a batch of biscuits for the nurses looking after her, using a recipe run in the paper several days earlier. The biscuits are quite wholesome and low in sugar (this is a new concept in 2004) and the nurses complain to him that they’re not very nice. He is very cross about all this and because I’m the chump who gets called to the front desk to deal with him, it’s all my fault. After trying to mollify him with sweet, soothing words, I check the recipe with its creator who assures me that it’s correct. As the final test, those of us in the newsroom all sample the biscuits. True, they’re not prize-winners, but they’re not bad either. Some journalists smoke to calm their nerves, others eat biscuits. I’m definitely the latter. By the end of the day, the plate is empty.

Wellington, 2014: I have a five-year-old daughter, a mortgage on a 1930s Wellington house with a 1980s kitchen, and a job at Stuff. My parents are dead; Mum’s famous tomato sauce recipe is lost forever. On the weekends I go to the market at Newtown School and buy armfuls of vegetables grown in Horowhenua, fresh noodles and pork buns. One Saturday, while trying to fit a $1 bunch of celery into our hopelessly small fridge, I have an epiphany: wouldn’t it be good to have a recipe column that focused on all the things you could do with one ingredient when it was cheap and in season?

Eventually I get brave enough to pitch this idea to the food bosses at Stuff. By this stage, I have form in this field: as well as my professional writing life I have a four-year-old food blog that I’d started to cheer myself up after moving back to Hamilton from London with a small baby.

I also know what it’s like to be a newspaper or internet reader in search of useful recipes. When we empty my parents’ home we give away many of Mum’s recipe books but I keep all her folders of neatly cut-and-pasted newspaper recipes. I think about the time Mum made Elisabeth Pedersen’s chocolate hazelnut cake and wrote to her to say it was a failure: Elisabeth wrote back explaining what she’d done wrong. ‘Don’t over-process the nuts’, Mum has noted in blue Biro next to the recipe.

Amazingly, my pitch works and I start writing a weekly column. At home, we eat lots of experiments. I keep it up for three years before moving on, during which time I meet lots of people who tell me they cut the recipes out and use them regularly. I never take this feedback for granted.

Wellington, 2020: I spend a lot of time sitting at my kitchen table; eating, working, failing at homeschooling and writing what will eventually grow into Homecooked, a collection of seasonally focused recipes for everyday New Zealand cooks. I watch as people around the world rediscover the gentle art of cooking their own dinners or baking cakes during Covid-19 lockdowns and I hope this resurgence is here to stay. Home cooking isn’t glamorous, but I’m convinced that it’s important. To me, it’s the ultimate exercise in mindfulness and creative problem-solving. Plus, you can eat the results! There’s no need for a fancy kitchen, either; until we move house in late 2020, I manage to cook perfectly well even though our stove is more than 30 years old and the oven door is held shut with a hair tie.

As I gather and test recipes for the book, I think about all the home cooks I’ve learned from and the culinary life lessons that I’m hoping my daughter is absorbing. One day, I want her to recognise the humble power of feeding her friends and family ‘something out of my head’. Without realising it, I am trying to pass on my mother’s legacy. Mum might not be here to see my book in print, but her lessons are baked into every page.

– Homecooked by Lucy Corry is out now.