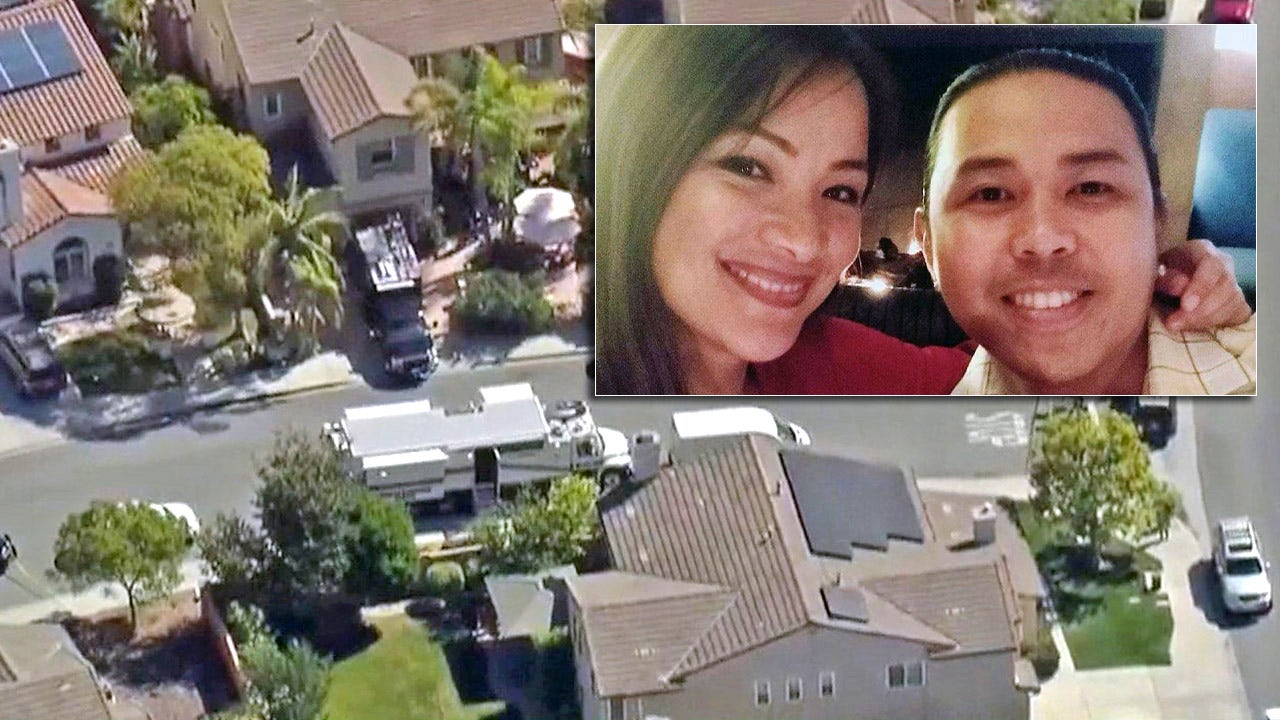 Larry Millete was arrested Tuesday morning for the alleged murder of his wife, Maya Millete, who vanished from their Chula Vista home more than nine months ago.

A flashbang could be heard moments before a SWAT team entered the house, followed by police instructions over a loudspeaker. The FBI then set up a mobile command center right outside the family’s home.

The Chula Vista Police Department partnered with the FBI, NCIS and San Diego County District Attorney on the case, writing 67 search warrants and interviewing more than 100 witnesses over the past nine months.

“These efforts ultimately generated a variety of pieces of evidence that have become clear and overwhelming: Larry Millete, [Maya]’s husband, is responsible for [Maya]’s murder and disappearance,” Chula Vista Police Chief Roxana Kennedy said at a press conference on Tuesday.

Maya’s older sister, Maricris Drouaillet, pleaded with the public for any assistance in helping locate Maya’s remains, which authorities are still searching for.

“This is still not the end. We still have a long way to go. We’re still asking the public, please help us bring my sister home. I still want to see my sister. I still want her to come home to us,” Drouaillet said through tears on Tuesday. “We made a promise to her 11-year-old daughter that we would bring her mom home. Let her kids know where their mommy is at.”

Larry is facing charges of murder and illegal possession of an assault weapon, according to San Diego County District Attorney Summer Stephan.

He was named a person of interest in the case in July and a gun violence restraining order was served against him in May, when police seized more than a dozen of his guns.

One of Larry’s weapons, a .40 caliber handgun, has still not been recovered by authorities.

Larry had been withdrawing large sums of money from the bank in the days leading up to his arrest, making it look like he was going to flee, according to Billy Little, an attorney who has been working with Maya’s family.

Maya warned friends and family in the months leading up to her disappearance, “If anything happened to me, it would be Larry,” Fox News exclusively reported in April.

Stephan laid out some of the “piece-by-piece, circumstantial evidence” on Tuesday that law enforcement has gathered over the past nine months.

Maya sought out advice on divorce attorneys in a Facebook group for mothers in her area on Jan. 7, the same day that she disappeared, and eventually made an appointment with a divorce attorney for the following week.

Maricris, Maya’s older sister, said that Maya had been considering a divorce for most of 2020, but she decided to go through with it on the day she went missing.

“It’s been a build-up over the year,” she told Fox News in April. “I think she was ready in December, and then she finally decided to file that divorce that day.”

In September 2020, he sent a picture of what appears to be an altar with an image of the couple covered in blood splatter or wax surrounded by candles, according to Little.

“These spellcasters would be asked to make Maya want to stay in the relationship, but as December of 2020 came, those messages to spellcasters were a lot more threatening,” Stephan said Tuesday.

“He was asking for May to become incapacitated, for may to be in an accident, to have broken homes so that she could stay at home, thus displaying his homicidal ideations to harm May.”

Richard Drouaillet, Maya’s brother-in-law, told Fox News that Larry would frequently try to push Maya’s family members to try to save the marriage.

The days after Maya disappeared

Maya returned home on Jan. 7 after she made an appointment with the divorce attorney. Her last message was to her family over Facebook messenger that night at 8:15 p.m.

“In the afternoon of Jan. 7, Larry Millete sent a really telling text. He said, ‘I think she wants me to snap, and I’m shaking inside ready to snap,’” Stephan said Tuesday.

At 9:57 p.m., nine loud bangs were recorded on a neighbor’s surveillance camera, but authorities have not confirmed that those were gunshots. About 30 minutes later, the Milletes’ children could be heard playing in the backyard.

In the early hours of Jan. 8, Larry moved his black Lexus into the entrance of the garage “where no video can capture whether a body was put in the back of the Lexus or not.”

“At 6:45 a.m., after repositioning the car at 5:58 a.m., Larry leaves and he does not return to the house for 11 hours and 21 minutes,” Stephan said Tuesday. “He leaves his phone behind so that there is no ability to track the GPS or location on the phone.”

Larry told authorities that he went to Solana Beach with his 4-year-old son all day on Jan. 8. Meanwhile, his employer was calling Maya and Larry’s dad “frantically” on Jan. 8, since it was so unlike him not to show up at work.

Maya was eventually reported missing by her sister the next day on Jan. 9.

In the days after Maya disappeared, Larry Millete told San Diego’s KGTV-TV that the couple had their “ups and downs” over the past year and that they got into an argument the night before Maya vanished.

The Milletes have three young children who have been staying with Larry since their mother disappeared. They were not home during the arrest and are currently safe, according to Chula Vista police.

Larry had been in a legal battle with Maya’s family over visitation rights for the kids before he was arrested Tuesday.

“My wife [Maya] voluntarily left me and our three children,” Larry Millete claimed last month in a court filing, which was obtained by CBS8. “We do not know her whereabouts. Her disappearance is considered suspicious or criminal. The Chula Vista Police Department stated that I am not a suspect and there is no evidence of foul play.”

Larry Millete’s lawyer could not be reached for comment through phone calls, texts, or emails on Tuesday.

Maya’s family had led searches on a weekly basis since the missing mother of three disappeared, most recently on Saturday and Sunday at Ocotillo Wells in San Diego County.

Maya Millette’s family attorney Billy Little will join ‘Fox & Friends First’ Wednesday morning starting at 4 a.m. ET for his first on camera interview since the break in the case.