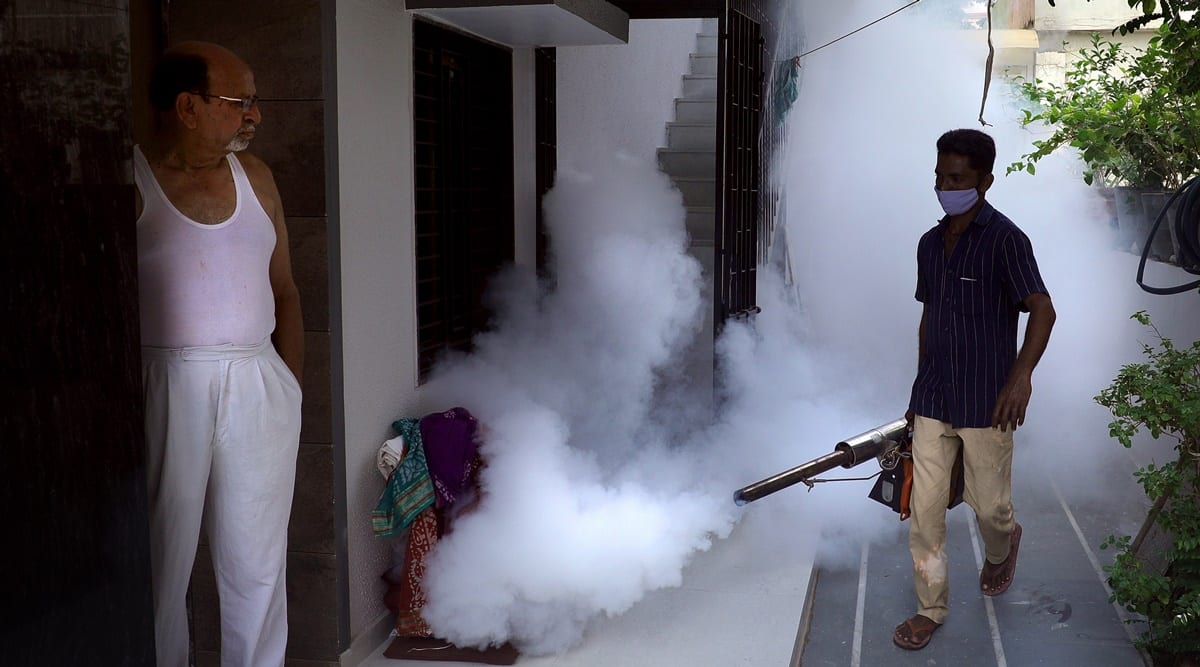 As high number of dengue cases are being reported in Mohali district, the Municipal Corporation (MC) intensified its fogging drive in all the wards of the district Tuesday.

MC Commissioner Kamal Kumar Garg said that the civic body has meticulously designed a plan and divided the city into four zones to ensure that fogging is undertaken at every nook and corner of the city. “Every zone will be catered by different teams as four teams have been formed to ensure fogging in every part of the city,” he added. As per the schedule, every sector and phase will be catered to once a week on average.

The Commissioner said that the civic body teams are using five per cent cyphenothrin as per the specifications to kill mosquitoes. He said that the MC has started to emphasise on fogging in the evenings as the aedes aegypti mosquitoes are active during that time. He said that the MC has initiated a special drive to make people aware of measures to prevent dengue through the distribution of pamphlets and other related materials from door-to-door.

He also said that the teams have already been deputed to clear the vegetation along with N Choe and other parts of the city, besides ensuring to clear water stagnation in parks, fountains and other places.

Mayor Amarjeet Singh Sidhu had instructed MC Officials to identify high-risk areas and provide special attention to them. He also directed the officials to carry out a survey to check dengue larvae in residential and commercial parts of the city. He directed them to form special teams in this regard and generate awareness among people to prevent the spread of dengue. He also asked the officials to intensify fogging in all wards of the city, focusing on streets and vacant plots to kill mosquitoes and destroy the larvae breeding in stagnant water.

GPS-enabled vehicles to fog in Mohali city
Chairing a Health Review meeting at District Administrative Complex, Deputy Commissioner (DC) Isha Kalia said that apart from fogging, regular disinfectant spray should be ensured across the city with special focus on public places owing to the festive season. “Instead of pressing each fogging vehicle into operation just once a day, they may be used twice. The evening fogging schedules will also be prepared,” said the DC.

Dusting with medicinal powder near drains should be coupled with frequent disinfection activities in densely populated areas, slums and narrow lanes, she added.
The DC said that the Municipal Corporation (MC) has pressed into service Global Positioning System (GPS) equipped fogging machines to enable monitoring of speed and duration of the vehicles in the designated areas.

The civic body is also using two shoulder mounted machines for fogging in parks, villages and settlements which are inaccessible with big machines. It is also being used in the houses of active dengue patients and their neighbourhood.

The DC appealed to the public to stage a fight against dengue as the mosquito responsible for dengue and chikungunya (aedes) breeds only in fresh and clean water and bites only during day time.