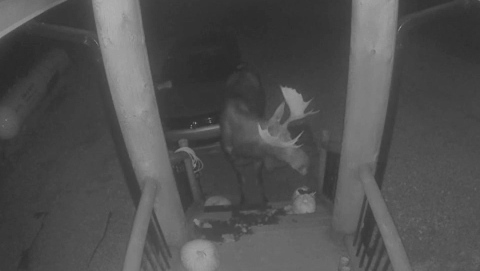 
A family northwest of Edmonton had a unique set of visitors this weekend.


The Mack family went to bed Friday evening like normal and woke up the following morning to find some of their Halloween pumpkins at the front steps to their home south of Barrhead, Alta., had been eaten.


“We wake up in the morning and found the pumpkins all mashed and marked,” said 10-year-old Austin Stuber. “They were all mush.


“We look on our camera and saw that there was a moose. We thought, ‘Oh wow, cool that we got to see a moose.’”


Later Saturday afternoon, the Mack family had gone into nearby Stony Plain and came home to the sight of five moose eating what little remained of their Halloween pumpkin display.


While the pumpkins were carved for Halloween, Austin said he wasn’t sad to see them eaten and mashed by the moose.


His mother, Heidi Nelson-Mack, shared how they had never seen moose come up so close to their home before.


For Austin, the incident made him want to “definitely” put pumpkins out again next year.


“A little bit further from the house, though, I think,” Heidi said.