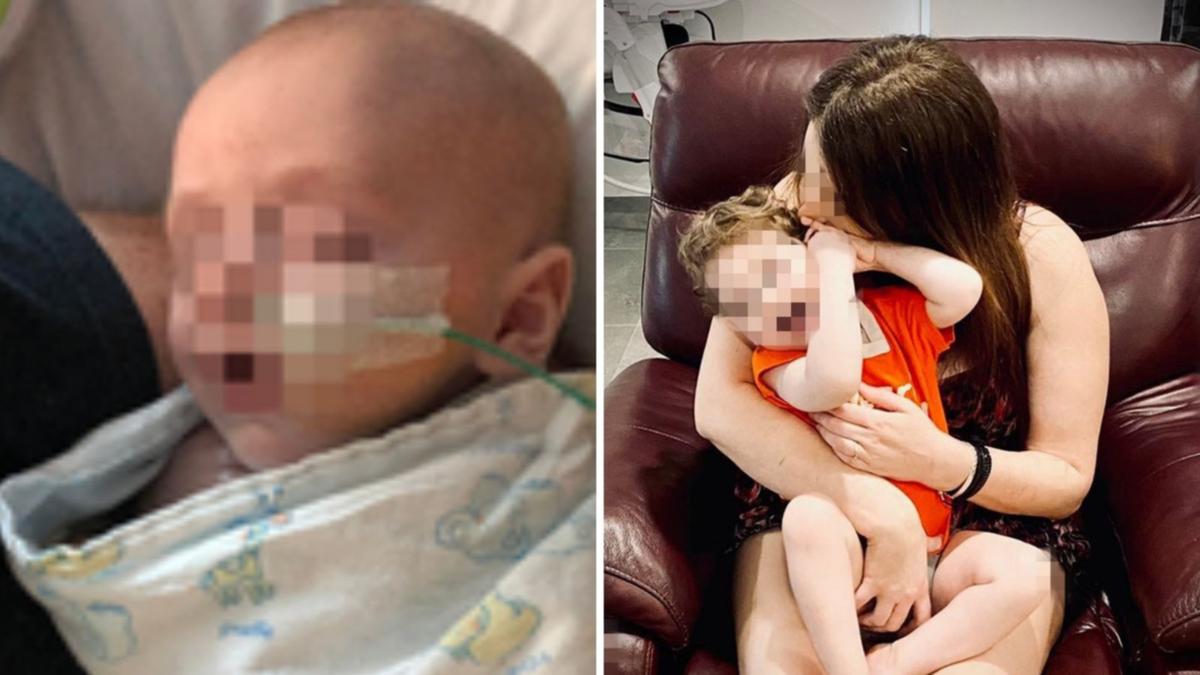 WARNING: Distressing images and content. *All names have been changed

The night it happened is etched in Queensland mum Rachael’s* mind.

Her six-week-old son Jordan* was a restless sleeper and Rachael had been up tending to him “three nights straight”.

So when her partner of six years Jake* arrived home from work, Rachael asked him to watch over their baby so she could get some rest and he agreed.

It was a request that was to change her life in the most tragic of ways.

WATCH Jordan’s recovery in the video above

“He woke me up with Jordan in his arms saying Jordan isn’t breathing and that he fell off the change table,” Rachael recalls.

The mum instantly grabbed Jordan and feared the worse.

Ordering Jake to drive to the hospital the trio sped for help.

“I was on autopilot just trying to keep Jordan alive,” the mum remembers.

Soon after, Jordan was flown to Queensland Children’s Hospital for specialised care.

Jordan was taken into ICU and placed in an induced coma, kept alive by the “wires and tubes” wrapped around him.

And as Rachael stayed helplessly by his beside, a gnawing feeling of unease began to wash over her.

Jordan had injuries consistent with violent whiplash to his head and neck including a fractured thigh bone and ribs.

The doctors were treating Jordan for “shaken baby syndrome” and something about that night didn’t add up.

“He [Jake] told multiple stories about what happened,” Rachael remembers and the new mum couldn’t help but think back to the times her partner had “roughly” handled their don.

“He was always a little rough with Jordan, like slamming his head on the change table, throwing him in the air when he couldn’t hold his head up yet,” Rachael remembers.

A police investigation was launched and Rachael’s best friend Kate* helped to discover the truth.

Police recorded her chatting to Jake one day,

“I reacted how any mother would, I broke down”

“She [Kate] pretended to be nice to him [Jake] and he confessed that he shook him [Jordan],” Rachael says.

During police questioning, Jake finally revealed the string of events that led to his son having irreversible brain damage.

He confessed to forcibly feeding his six-week-old son, picking him up from only his wrists, forcibly holding his legs down, throwing him up in the air and catching him and throwing him on the change table.

The web of lies

“I reacted how any mother would, I broke down,” she confesses.

The mum threw herself into the only thing that mattered, her son.

“I was with bub every minute of every day.”

Brisbane District Court later heard the 130kg, 28-year-old father had a history of rough handling the child – with Jake confessing he would occasionally throw the newborn into a beanbag.

They also heard the father would roll him out of blanket resulting in the child bumping his head and would shake him to stop his son from crying.

But before his confession, the court heard the father lied to police and tried to blame his wife for the injuries his son sustained.

“He admitted he was responsible for causing the child’s brain injury and he would have to live with this for the rest of his life,” Judge Smith said.

But in Rachael’s eyes, justice was not served.

“My baby stopped breathing twice and they had to resuscitate him twice, so he should’ve got attempted murder,” she says.

But due to legal reasons, Rachael can never name the man who maimed her son for life.

Forced to share her story anonymously, Rachael is furious at the system.

“Why shouldn’t he be named?

“Why should he be protected when my son is going to suffer for the rest of his life because of him and what he did,” she says.

Despite what happened, Rachael is finding the small things in life to hold on to, including the moment Jordan learnt to sit on his first birthday.

He can’t walk or talk and is still fed through a tube but the mum say’s he is still a very “happy boy”.

Jordan now attends a special needs playgroup and has found a new love for swings, sandpits and mirrors.

Rachael is now 30, she still suffers from PTSD and struggles to leave Jordan in the care of anyone else.

But she wants the truth told because no other mother should have to go through what she did.