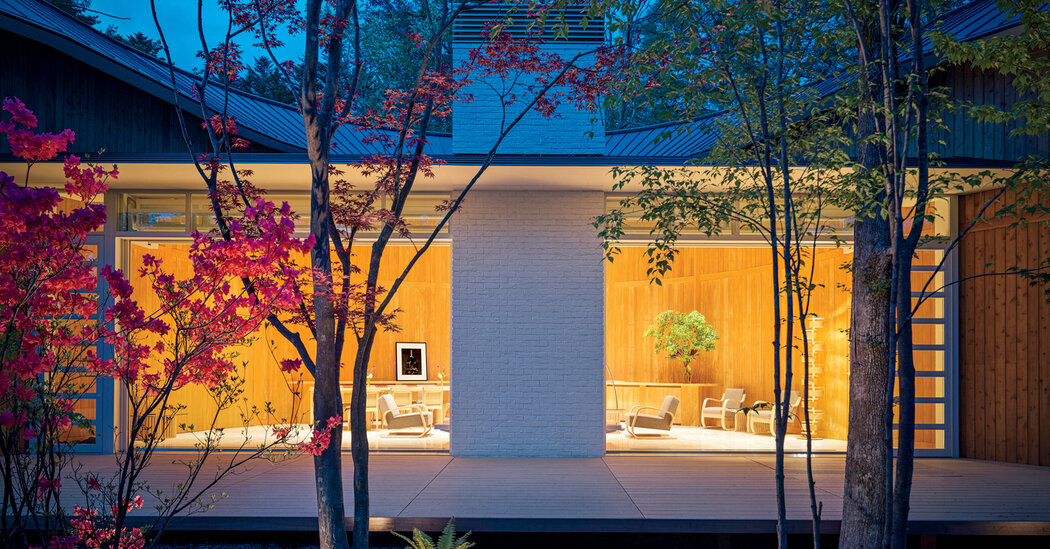 A Japanese Hotel Hidden Away in the Forest

Before the Japanese architect Shigeru Ban designed the first Shishi-Iwa House — an 11-room hotel located in Karuizawa, a town in the leafy foothills of Mount Asama two hours northwest of Tokyo — which opened in 2018, he commissioned a map of the trees on the property. The elegant two-story building he came up with winds around them like a river. The idea was to create an escape where architecture disrupts the natural world as little as possible. This May, a new property, Shishi-Iwa House No. 2, will open nearby; it will include a 30-seat restaurant whose seasonal menu will feature local ingredients, as well as a wine and whiskey bar on the second floor, where views from the monumental windows will make you feel as if you’re floating in the forest canopy. Both retreats have impressive art collections: House No. 1 has paintings by artists from the Japanese avant-garde Gutai movement; House No. 2 will be hung with old masters and works by contemporary photographers. A third Shishi-Iwa House — a modern take on a traditional sukiya teahouse designed by the architect Ryue Nishizawa — will open in Karuizawa next spring, and a fourth, designed by the architect Kazuyo Sejima, is forthcoming in 2024 in Hakone, a hot springs town near Tokyo with views of Mount Fuji. From $500 per night; shishiiwahouse.jp. — Gisela Williams

A New Iteration of a Classic Bronze Timepiece

Bronze is not a metal traditionally associated with horology; when worn against the skin, it develops an unmistakable patina. The alloy, however, is favored in the maritime world, where it is used for everything from screws to propeller shafts because of its ability to resist corrosion. In 2011, the Italian watchmaker Panerai — which made chronometers for the divers in the Italian Royal Navy in the past century — introduced one of the first watches with a bronze case, the Bronzo, which became an instant classic. Now, there’s the PAM760 Radiomir Bronzo, a nonsubmersible update of the brand’s popular diving watch, with a sapphire back fixed to the case band by a ring of titanium. The model’s name is a nod to the radium-based substance, patented by Panerai in 1916, that once illuminated the timepiece’s minimalist dials and oversize sights, making them easier to read in darkness or underwater. For a little bit of timekeeping history, one sometimes has to dive deep. $16,400; (786) 735-6446. — Jameson Montgomery

Flavorful Variations of Escargot, From Southeast India to China

Most Americans are familiar with the French version of snails: escargot, your common garden snail, cooked in butter and flecked with herbs. But snails are also enjoyed in Asia. Vijay Kumar of the downtown New York restaurant Semma grew up on a rice farm in the South Indian state of Tamil Nadu, where his family would gather river snails from the paddies after a monsoon; his grandmother would cook them in a gravy of tomatoes, caramelized onions, tamarind and ginger. “It speaks to the resourcefulness of various cultures,” says Kumar, who serves a re-creation of his grandmother’s dish. “Most Indians have no idea that we have snails in Southeast Indian cuisine.” He compares the texture of cooked snails to that of button mushrooms, adding that they absorb flavors just as well. Snails, dressed in miso butter, also make an appearance at a nearby Southeast Asian restaurant, the Tyger. Meanwhile, luosifen, stinky snail noodles, became a viral sensation in China during the pandemic. The humble specialty from Liuzhou starring river snails and fermented bamboo shoots is now available in instant form, complete with a plastic pouch of condensed snail broth.

If you want to experiment yourself, you can order from Peconic Escargot on Long Island, the only commercial snail producer in the United States — Taylor Knapp, the founder, raises his in a 300-square-foot greenhouse and feeds them a diet of herbs and greens like sorrel, dandelion and clover. Or forage for them — as the recipe developer Zoe Yang has done, using periwinkles (small marine snails) in place of the trapdoor snails gathered from rice fields in Nanjing. — Cathy Erway

A Stone Table That Recalls the Roman Empire

Marble — whether buffed white or shot through with expressive veins — is synonymous with classical Rome, but the city’s iconic exteriors were made largely of travertine, a porous sedimentary rock that is a form of limestone. Its pale yellow tone, as seen in the Colosseum and St. Peter’s Basilica, is created by hot spring water reacting with carbonate minerals. At once elegant and raw, the stone was often used as a decorative facing for structures made of brick or concrete — the material that allowed the Romans to perfect the arch. Now, the Paris-based architect and designer Joris Poggioli has reinterpreted those codes in this minimalist travertine table for RH. Ringed with arches that evoke columns and carved niches, it suggests not just the majesty of the Roman Empire but the verve of 1980s postmodernism — an ideal synthesis of the ancient past and the fearless future. — Nancy Hass

After a decade-long focus on kinetic works, the artist Marcel Duchamp brought to the 1935 Paris invention trade fair Concours Lépine a set of “Rotoreliefs” — lithographed spirals on paperboard disks made to spin on a turntable as entertainment. They flopped at the exhibition, but his experiments had already affected filmmakers such as Jean Cocteau, who used a rotating disk in his 1932 film, “The Blood of a Poet,” and Man Ray, with whom Duchamp collaborated (along with the photographer Marc Allégret) on “Anemic Cinema,” a 1926 six-minute fantasia of gyroscopic imagery and text. Duchamp never did figure out how to bring such 3-D illusions to the masses, but his investigations into depth perception and movement helped define the aesthetic imagination for decades. Now, for a convertible series of necklaces, Van Cleef & Arpels, the 116-year-old Paris-based jeweler, has taken inspiration from both the hypnotic swirls of the “Rotoreliefs” and “The Seven Bodies,” a 2017 neo-Op Art work by the 39-year-old Brazilian-born, Brooklyn-based Bruno Penabranca. The artists’ trippy influences are evident in the rose-gold and onyx rays forming the central motif of the necklace, which can be transformed into a brooch or a choker. With a shimmering pale pink morganite sun at the center and a whimsical tassel of onyx and red spinels, it embodies an invigorating combination: one of chaste geometry and prismatic psychedelia. — Nancy Hass