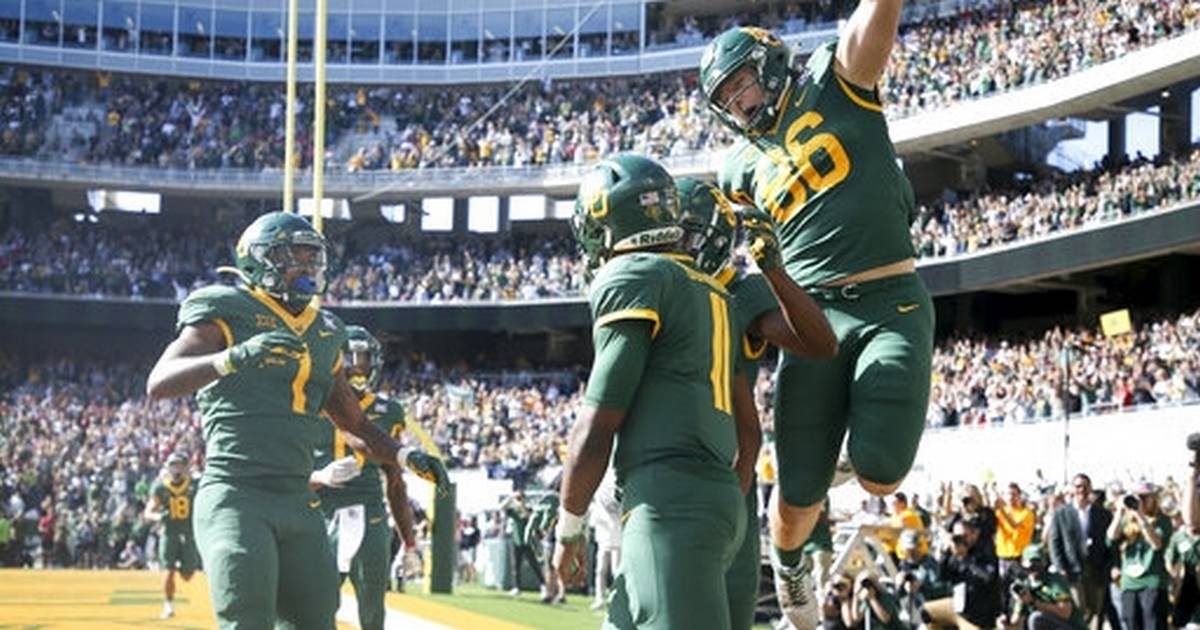 WACO, Texas — Baylor tight end Ben Sims and the ninth-ranked Bears will have a lot of interest in what happens north of the Red River on Saturday night if they take care of their business earlier in the day on the banks of the Brazos.

The Bears (9-2, 6-2 Big 12, CFP No. 8) still have a chance to make the Big 12 championship game for the second time in three seasons if they win their home finale against inconsistent Texas Tech (6-5, 3-5). But they would then need seventh-ranked Oklahoma State to win its Bedlam game at home against No. 10 Oklahoma.

‘If we control the things we can control this week, we might find ourselves in a new situation next week,” Sims said. “For sure, it makes things more interesting.”

‘They’re a good team,’ Red Raiders running back SaRodorick Thompson said. ‘It’s our job to try to just be us and play up to our capabilities, not really make this game about them, but more of a game about us.’

Oklahoma State clinched a spot in the Big 12 title game for the first time with its 23-0 road win last Saturday night against the Red Raiders, who were held to 108 total yards and ended a streak of scoring in 302 consecutive games since 1997. They had beaten Iowa State 41-38 the previous week to get bowl eligible.

Sonny Cumbie will remain interim head coach for Texas Tech until after its bowl game. He then will stay on as offensive coordinator for Joey McGuire, the former Baylor associate head coach and linebackers coach named Nov. 8 to replace fired coach Matt Wells.

McGuire went to work immediately at Texas Tech earlier this month after 4 1/2 seasons with Baylor, but isn’t handling on-field duties and isn’t expected to be in Waco for Saturday’s game. His presence could still be felt.

‘I think defensively there is reason to be careful with our signals,’ Baylor coach Dave Aranda said. ‘Outside of that, it’s the opponent that’s right in front of us, it’s the things that we put on tape. I think offensively Tech has shown they’re interested in opponent film. If there are weaknesses, they attack it. If there are things that hurt you in the past, they’ll notice it.’

Baylor starting quarterback Gerry Bohanon injured his right hamstring late in the first half in a 20-10 win at Kansas State last week. Redshirt freshman Blake Shapen finished the game by going 16-of-21 passing for 137 yards.

‘I just know in talking to him, there’s probably not going to be someone more determined to get back than him,’ said Aranda, describing Bohanon as day-to-day. ‘If I were to bet, I’d bet on Gerry.’

Abram Smith, a starting linebacker for Baylor at the end of last season, is the Big 12 rushing leader with 1,249 yards. That has him 299 yards from the single-season school record with at least two games, and maybe three, to play. His seven 100-yard rushing games are one short of Walter Abercrombie’s school record of eight set in 1980.

SONNY THE SCOUT WITH THE GA

When Aranda was a graduate assistant at Texas Tech in charge of running the scout team offense to prepare the defense from 2000-02, the scout team quarterback was Cumbie.

‘The biggest memory I have with him is just all the stories that he would tell us in our scout-team meetings,’ said Cumbie, who didn’t become the Red Raiders’ starting quarterback until his senior season in 2004. ‘I remember those stories, the wisdom that he shared with us on a daily basis. … I remember as a player just how detailed, how fiercely intense and how sharp Coach Aranda is.’

Aranda remembers how Cumbie would respond with no facial expressions to some of the weird things the coach said.

‘After a while, he had heard them before. Sonny is one of my favorite all-time guys,’ Aranda said. “After I left, to see him have success after he finally got his opportunity, it’s crazy that I’ll see him on the other sideline like this. But excited for him.’

Texas Tech and Baylor, in the Southwest Conference together before Big 12 play started in 1996, meet for the 80th time, The series is tied 39-39-1 after Jonathan Garibay’s 25-yard field goal as time expired last year gave Texas Tech a 24-23 win. Baylor won 33-30 in double overtime when the series was last played in Waco two years ago.