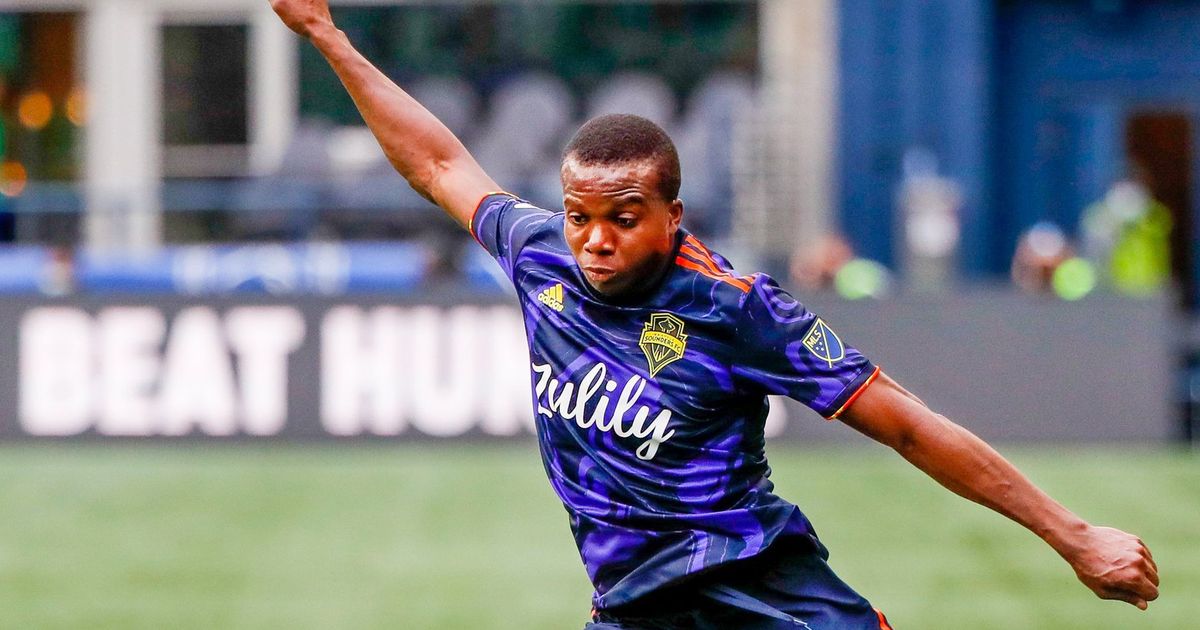 TUKWILA — A reminder, penalty kicks are not goals.

Yet, there was some satisfaction at one sight from Wednesday’s penalty shootout between the Sounders FC and San Jose Quakes — Nouhou finishing his attempt. The defender was ninth in Seattle’s lineup of takers, using a mini run to power a low, left-footed shot past Quakes keeper Matt Bersano.

Bersano had the walk-off score to advance San Jose to the U.S. Open Cup round of 16. But Nouhou finally put the ball in the back of the net for the first team.

A certifiable Nouhou goal is the “what’s next?” answer to the most decorative year of his career. The Cameroon international helped his country place third in the Africa Cup of Nations last winter, qualify for the Qatar World Cup earlier this spring and was a starter in helping the Sounders become the first MLS team to win the CONCACAF Champions League title this month.

“As a player, I need to be more consistent and improve my crosses and score the goal because all of the big players now, they just want to score,” Nouhou said. “When you score, it’s good. The first thing is defense, but I need to score goals.”

Nouhou’s first and only professional goal was in 2017 when playing for the club’s second-division team. The 24-year-old often reflects on those early years when he was under the close tutelage of former Sounders assistants Djimi Traore, Gonzalo Pineda and Ezra Hendrickson.

The trio helped the native French speaker learn English, adapt to the MLS playing style and hone his career path. Nouhou broke into the Sounders starting lineup in 2018 — becoming fondly associated with a train because of his speed on the left flank — and was an MLS All-Star in 2021, his first as a center back.

“Off the field, I’m a little bit different, I’m a little bit shy,” Nouhou said. “I just want to be an example for the next generation, that’s why on the field I want to be 100%, run for the fans (and hearing the fans) gives me more power, so I’m just laughing sometimes because it’s good.”

This year, Nouhou’s talents shined on the global stage with shutting down Egypt and Liverpool star Mohamad Salah in the AFCON semifinals and being named to the CCL Best XI team. Nouhou had 19 clearances, seven steals and one assist in the tournament.

“I don’t know how long we can hold onto someone like Nouhou,” Sounders keeper Stefan Frei said. “He’s shown that maturity. Facing some of the best players in the world and not just keeping them quiet but actually frustrating them, like Mo Salah, that’s a true testament. You have to take notice.”

Nouhou said playing in the English Premier League is one of his dreams. Garth Lagerwey, the Sounders general manager and president of soccer, has intimated the left back going out on loan anywhere is a possibility, but the next transfer window doesn’t open until July.

Everything until then just furthers Nouhou’s resume. And there couldn’t be a better time for the Cameroonian to help the Sounders pocket goals than Sunday’s return to MLS competition with a matchup against Minnesota at Lumen.

During a film session Friday, Sounders coach Brian Schmetzer showed his team a slide of where they rank in MLS standings and the players could clearly see the only positive is there are 27 games remaining.

Whether at home (1-2-0) or on the road (1-3-1), the Sounders are bad. They’ve conceded 13 goals, the unfavorable results were with and without the first-choice starters and even if they had won the two games in hand due to the CCL tournament scheduling, the possible 13 total points — instead of the current seven — wouldn’t qualify them for the playoffs if the postseason were to start Sunday.

“We know we’re not where we want to be,” Sounders winger Jordan Morris said. “We have a couple games in hand that we need to win, for sure. We know there’s a lot of season left to play, and we know we’re better than where we are. We put a huge emphasis on Champions League and that had an effect on where we are as well, but we’re really confident as a team that we’re going to move up the table as the season goes on and put ourselves in a good position.”

Minnesota (4-4-2) would make the cut as the seventh and final team in the Western Conference. Their arrival is ideal timing as the Loons have been a kick-starter for the Sounders since joining the league in 2017.

A win against Minnesota was an impressive season-opener and palate cleanser after a Portland loss last season. In 2020, the Loons were casualty to a historic playoff comeback win. In 2019, a win against Minnesota helped clinch home-field advantage in the postseason and in 2018, it ended a four-game winless skid to open the season.

But when it comes to that first goal, Nouhou doesn’t care about the opponent or location. So, regardless of situation, he’s going to seek his chance.


Jayda Evans:
206-464-2067 or jevans@seattletimes.com; on Twitter: @JaydaEvans. Jayda Evans covers the Sounders. She offers observations, critiques, and occasional offbeat tales. Evans also has written a book on the Storm and women’s hoops titled, “Game On!”