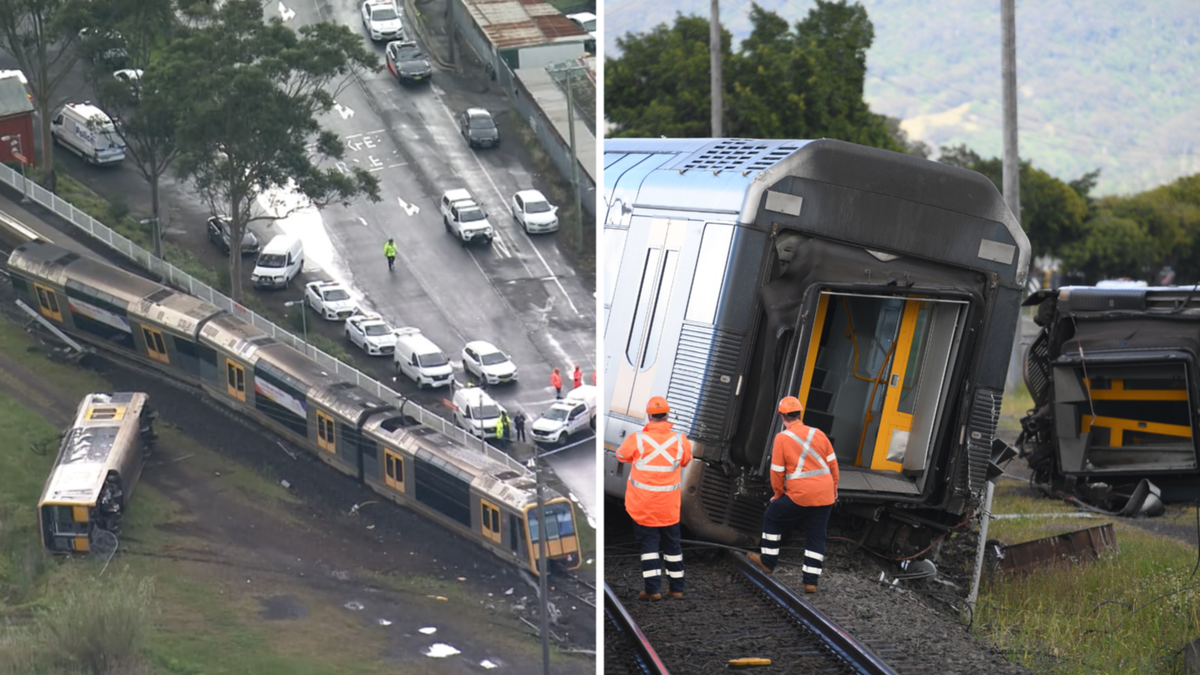 NSW Police are investigating if a stolen car was ‘deliberately’ left on a level crossing before a major train derailment near Wollongong early on Wednesday morning.

As seen in the video above, the smash around 4am caused significant damage to the four-car passenger train at Kembla Grange station.

The front carriage ended up on its side and metres away from the rest of the train. Other carriages were leaning sideways against the station platform.

A crime scene has been established and a witness told investigators they saw someone running from the area after the crash.

Four people suffered minor injuries in the crash, including two passengers and the train’s driver and guard.

The passengers suffered “abrasions” and the driver had back and abdominal pain.

“It was a chaotic scene when emergency services first arrived with the front carriage completely off the tracks and on its side and the second tilting,” NSW Ambulance Chief Inspector Norm Rees said in a statement.

“The train had brought down power lines which were draped over the carriages and when you see all that, it’s lucky there weren’t more serious injuries to those on board.”

A man called Nick who was on the train on his way to Sydney told radio station 2GB he was lucky not to have been injured.

“It was like being on a trampoline. (We were) just bouncing up and down,” he said.

Sydney Trains Chief Executive Matt Longland told Sunrise it was a “significant derailment” and it was “too early to speculate” why the car was left on the tracks.

“The site is under the control of the NSW Police and emergency services so we will await their investigation to continue,” Longland said.

Customers are warned to “allow plenty of additional travel time”.

The accident comes on an already chaotic day for train services in NSW.

Commuters are being told to make other arrangements as rail workers strike over the lack of progress on a new enterprise bargaining agreement.

Sydney Trains and the NSW TrainLink Intercity network will have fewer services on Wednesday, with some running to a reduced timetable and others replaced with buses.

Transport for NSW chief operating officer Howard Collins said travellers should “expect your trip to be impacted and longer than usual”, with disruption all day and only about 30 per cent of services running.

People should use trip planning apps and the Transport for NSW website to find the latest information and alternative travel options.

Crews are refusing to drive privately built trains, which include Waratah and Millennium trains.