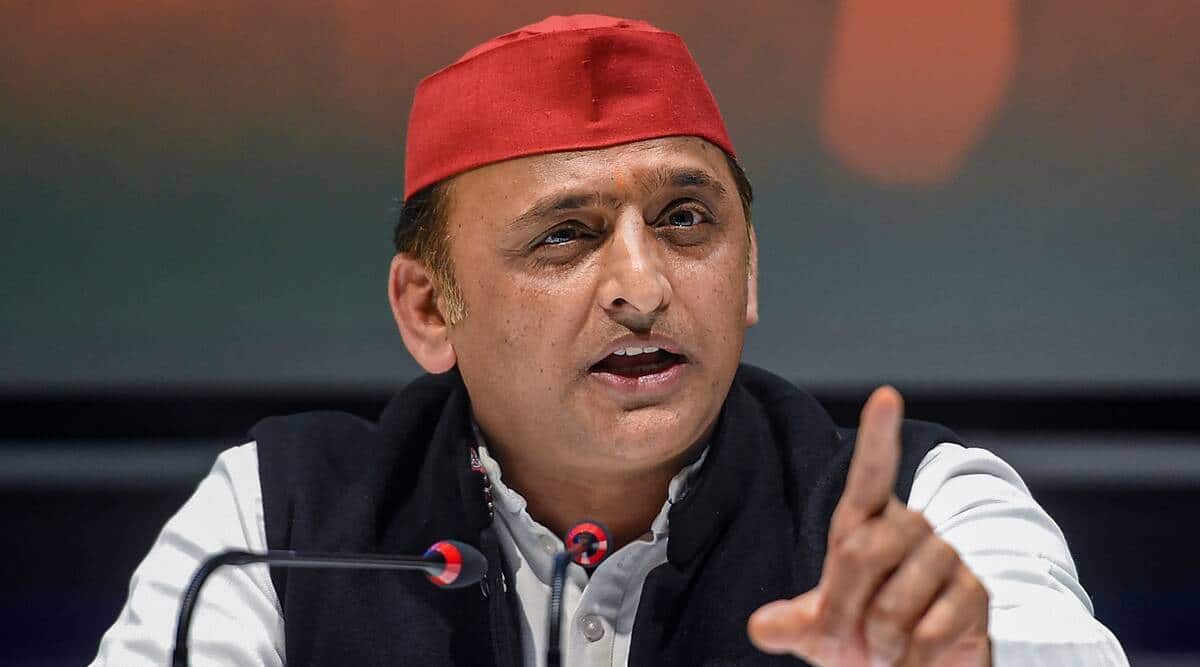 A day after the searches conducted by the Income Tax Department, SP president Akhilesh Yadav on Sunday alleged that his phones and that of his party leaders are been tapped by the government. He also hit out at Uttar Pradesh Chief Minister Yogi Adityanath accusing him of snooping on their phone conversations.

Speaking at a press conference at the party headquarters in Lucknow on Sunday, Akhilesh said, “All our phones are being tapped. This includes calls made from the SP office and of people associated with us. The CM himself listens to the recordings in the evening. This is the useless government we have. I should warn you all that if you contact me, then recordings of our conversation will also be listened to.”

Akhilesh alleged that the phones are being tapped on directions from the UP government and the “useless chief minister”. “Wherever there are elections, the BJP taps phones of Opposition leaders…I am the one who is being targeted.”

Akhilesh was accompanied by SP national general secretary and spokesperson Rajiv Rai, whose house was searched by the I-T in Mau district Saturday.

On Saturday, the Income Tax Department conducted searches at the houses of a SP leader and three others considered close to Akhilesh. SP national general secretary and spokesperson Rajiv Rai’s house was searched by the I-T in Mau district.

Talking about the raids, Akhilesh said, “They raided an ordinary person in Bengaluru too. One of the persons raided operates WhatsApp for us. How many lies have you spread on WhatsApp against our Muslims brothers by sharing images of blood? A person who helps in maintenance of our party office was also raided.”

He added, “Everyone knows how an OSD is appointed. Whoever is close to the CM is made an OSD. His house was raided and tiles were broken and the couches were torn.”

Levelling allegations of casteism against Adityanath, Akhilesh said, “Which caste is the CM from? The district police chief, the DGP and the Kanpur official—which caste are they from? These four conspired at the CM residence to defeat us in Kannauj. Those who talk about caste should tell us which caste these four officials belong to?” asked Akhilesh.

“I have said this several times that as the pain of defeat hits the BJP, the number of their leaders coming from Delhi and CMs in UP will increase. We never doubted that Income Tax Department, ED, CBI and other agencies will come to support them. We will be attacked through these agencies. So far, these agencies were for those who were in government to topple their governments. But now, we are seeing for the first time that they are using these agencies to try and ensure that SP doesn’t form government in UP. The whole country knows that when the BJP smells defeat, these institutions are used. The BJP is using the same tactics as the Congress,” said Akhilesh.

Accusing the BJP government at the Centre of “protecting” Union Minister of State (Home) Ajay Mishra, the SP chief further said, “Allegations are there against him and his son. Then why does the government not punish him?”

“I would like to point out that the CM had cleaned his residence with gangajal after coming to power. No other CM had done this,” he said.

He added, “After the Supreme Court verdict came stating that former CMs can’t stay in their official residences, I remember that Netaji (SP founder Mulayam Singh Yadav) had gone to meet this useless CM. When I got to know, I had told Netaji not to go. But because of political decorum, he went and thought that till a new house is finished, we could stay there. But I remember, the moment he left the CM residence, the CM signed papers to get the houses vacated.”

Levelling further allegations against Adityanath, Akhilesh said, “Who can forget those shops in Gorakhpur? The useless CM got the bulldozer to run over the shops. Now, they are building a new complex and road. The government should tell how much compensation was taken for it by the useless CM.”