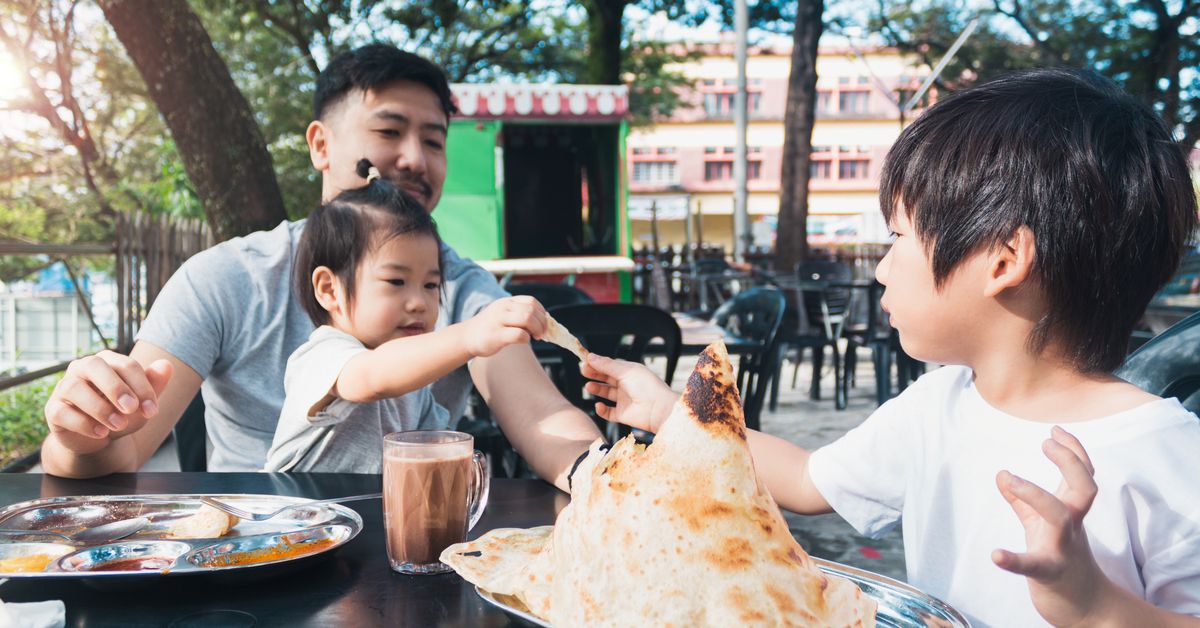 The plan for my birthday last year was to have a nice lunch out in Napa Valley with some wine and my husband for the first time in months. The plan was not to bring my children, ages 1 and 3, to enjoy lunch with me. But it was the summer of 2020 and in those demoralizing early pandemic months, we weren’t yet comfortable with a sitter. I had to take what I could get, so to fancy birthday lunch my daughters went, sitting outdoors in designer high chairs at a socially distanced table, coloring with crayons while I enjoyed a glass of wine, then another, and my first meal out since the pandemic began. My kids behaved, enamored by the trees and flowers and sights and sounds of actually being somewhere that wasn’t our family room. It was a delight.

In the months since, outdoor dining came to represent one of the very few “normal” things my family can do together: What started as a way to keep my unvaccinated toddlers safe and out of indoor communal spaces turned into an enjoyable perk of otherwise monotonous pandemic life. It feels more relaxed somehow, even if the restaurant hasn’t changed anything about its menu or service beyond building a few low walls and putting tables on the sidewalk.

It also feels safer. Not because of COVID, but because of the relatively informal vibe of a table set outside of the restaurant on the sidewalk or street. Dropped food is less of a big deal (especially if we bring our dog, too. Why not?). Traffic and street noise drown out yells, screeches, or the entire Moana soundtrack when my kids sing it at the top of their lungs. Private cabanas with walls and windows contain kids with no worry of bumping into other diners’ chairs or tables. There’s often room for a stroller, a bike, a scooter, or even two. And it means we can spend time together as a family, doing something that we love and want to share with our kids, without fear that we’ll disturb an important meeting or special-occasion dinner.

Somewhere along the line, adding a young human to a restaurant table became controversial. I’m confident every parent who has taken their child to a restaurant in America has endured that sideways glance from an adjacent table — if you’re a parent, you know the one. We’ve seen online rants decrying kids’ so-called bad or annoying behavior, when really they’re doing what kids do: talking loudly, occasionally spilling drinks, bumping into things. (Of course, these grave childhood sins are somehow acceptable when committed by an adult in the same space. Funny how that works.)

When those things happen outside — where it’s already loud and already kinda dirty — it takes the pressure off parents to convince their fellow diners that their kid isn’t a nuisance, but a person, too.

“Outdoor dining does make the dining experience a lot more accessible to another generation,” said Kimberly Litchfield, former general manager at AL’s Place in San Francisco and mother of a preschooler. “I do think it’s a really unique American cultural perspective, to have that separation between going out to eat and your family life with kids, because that doesn’t exist in other places.”

Litchfield’s husband is from the Yucatán in Mexico, where, she says, you don’t go anywhere without your kids. “Regardless of where you’re going or what you’re doing, your kids just come along. And that’s kind of the culture we’ve adopted thus far in our own household,” she said. Her daughter has enjoyed plenty of higher-end restaurants in her three years, both indoors before the pandemic, and outside, since. In fact, During Litchfield’s own birthday celebration at a restaurant this year, her kid stole all her caviar and oysters. (I’m jealous, mine would never. At least we had french fries and butter pasta.)

If you need proof that America dislikes children, look at recent headlines: a politician criticized for taking paternity leave to bond with his newborn twins, a political fight over paid family leave and affordable childcare in Washington. At the same time, reports of how other countries treat young children and their parents continue to confound us: A recent New York Times report notes that the United States spends just $500 per child per year on early childhood education, a bleak number in comparison to countries on the other end of the list. Norway spends nearly $30,000 per year on early childhood care per child per year; Iceland close to $25,000.

Then there’s the restaurant industry itself, traditionally inhospitable to working parents who need affordable childcare, often during nontraditional work hours. A few years ago, a bunch of restaurants simply banned kids outright. For an industry built on making people feel welcome, the reality is that restaurants can be inhospitable to families.

Parents know how to read the unwritten rules that dictate a child’s presence in a shared space. If a restaurant has a kids’ menu, that’s a pretty sure sign yours is totally welcome. If the restaurant supplies high chairs, that’s another. And if the bathroom has a changing table, the white whale of restaurant dining with babies, you’re golden.

Briana Volk, co-owner of Portland, Maine’s Hunt and Alpine Club, is a parent of two young children. Volk’s restaurant started seating guests outside in May 2020. Since then, she says she’s noticed a huge shift in how many more families are coming to dine.

“When I first started going to cocktail bars, I was in my 20s and childless, as were most of the people sitting at the same bars. Now, many of those same people have kids and they still want to go out, so we have tried to embrace that evolution of who our guest is and ensure they feel welcome inside our space,” she said. She’s trained staff on how to best interact with the restaurant’s littlest guests, including offering free apple juice while seating children so parents can take a moment to actually look at the menu.

I’d never turn down free juice boxes (that’s so thoughtful!), but really, restaurants don’t need to roll out the red carpet to toddlers and their parents. The bare minimum — a table and some chairs on the sidewalk or even the street — works fine.

The physical setup dictates just how family-friendly any given restaurant is. Our local pizza restaurant, still closed to indoor dining, built individual streetside cabanas outfitted with green turf under the table. We toss a blanket down there and call it a picnic for our kids while we drink great wine out of glass stemware without having to pack glass in a picnic basket. City busses whiz mere inches from the protected booths built in the street at my girls’ favorite pasta spot. They love the action; we love the free kid entertainment that keeps them seated for 90 minutes. Even a scene-y spot on a Friday evening in New York City’s Meatpacking District felt accessible outside with my 4-year-old. She had butter pasta and ice cream; I had mussels and wine.

We’re never the only group seated outside, though we are sometimes the only family. That’s because these new setups work for nearly everyone. Remember how great that first meal out after lockdown felt, sitting outside in an unfamiliar setting, enjoying food you missed terribly? It was nothing like before, but it was magic. That’s how it still feels to parents of young children, even if it’s unfussy, unfancy, or cobbled together like most outdoor setups are. It’s wonderful, and it should stay.

Expanded outdoor and street dining setups have already become permanent or near-permanent in some places, like San Francisco, where I live. (We’re thrilled.) But in other places, the future of dining outside is less clear, and some restaurants might actually be in trouble because of it. According to the National Restaurant Association, indoor dining slowed at 78 percent of restaurants in early fall due to the delta variant. Meanwhile, at the time, outdoor dining made up 20 percent or more of daily sales at two-thirds of full-service restaurants.

Restaurants have been clear on the economic benefits of streetside dining. More tables means more guests which means more revenue. In a business that runs on thin margins, even just a few additional tables can make a big difference to their bottom lines. When my city’s mayor voiced support for permanent outdoor dining last spring, 94 percent of restaurants surveyed by her office said they’d continue to operate outside even when indoor dining resumed. Laurie Thomas, a restaurant owner and director of the Golden Gate Restaurant Association, said that the outdoor dining setups had “revitalized our boulevards and neighborhoods.”

Then there’s the emotional reason: We love it. New outdoor dining setups work for me and for parents like me, a welcome respite during challenging times. It’s been a long pandemic for parents of still-unvaccinated children, and families deserve to go out and enjoy their communities like everyone else, especially now. We’ve spent months saying no to gatherings, we’ve eschewed birthday parties and playdates in the name of safety, and most travel is off the table. Dining outdoors feels safe, relaxing, and just plain nice, an actual silver lining to an awful pandemic. And, finally, I don’t need to convince anyone else that my small humans also deserve a literal seat at the restaurant table.