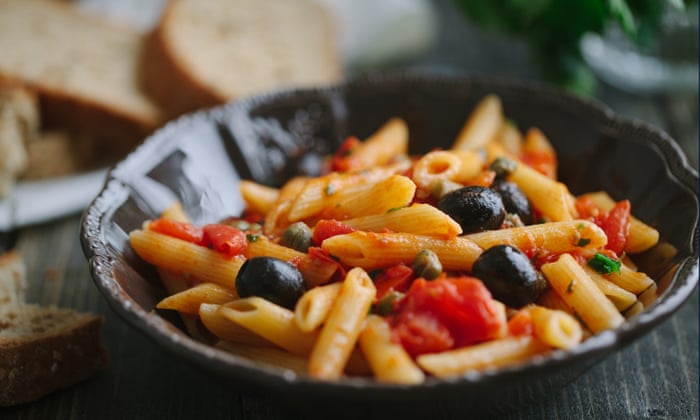 As a lifelong vegetarian, I’ve been asked what I “actually eat” more times than I’ve had hot dinners (pun intended). The truth is complicated – but if I had to pick one food to live on for the rest of my life, it would be pasta. Lovely, lovely, carby bits of delicious, versatile pasta. Penne, to be specific.

I grew up in a household that loved a pasta dish. There were lots of us – I’m the youngest of five – so healthy, hearty, quick-to-prep food that satisfied a fussy gang was a priority. Every night, my mouth watered all over the table as Mum and Dad cooked luscious spaghetti; fusilli with pesto; rich, cheesy macaroni; or hot, steamy lasagne.

As I got older, pasta was the food I first learned to cook, experimenting with different sauces, spices, herbs, and an array of vegetables. I learned quickly that pasta goes with everything. When I went to university at 18, I took my books, my favourite teddy bear, and my pasta skills. It was nostalgia on a plate when I missed home and saved me from starvation more than once.

Then came my experimental phase as a young adult. With Jamie Oliver and Nigella Lawson as my guides I learned more about Italian cuisine, and soon discovered a whole new world of pasta I never even knew existed (as well as the life-changing trick of adding a dash of pasta water to your sauce). Tagliatelle! Rigatoni! Pappardelle! Farfalle! And what was this gnocchi thing that tasted so good? I had been so sheltered.

But there comes a point in every pasta lover’s life when you have to commit. You have to choose. You need to pick a favourite, and mine is penne. It’s undeniable, indisputable. My cupboards are packed – creaking at the hinges full! – with packets and packets of divine, delectable Barilla penne.

There are roughly 600 shapes of pasta out there – Italy’s popular pasta brand Barilla sells more than 160 – but penne is clearly the superior pasta shape. It is the most resourceful of all pastas, the most daring and accomplished. It has the most all-round configuration, adaptable to any food accompaniment and allowing for the most sauce to be soaked up. It looks pretty on a plate, among the least messy and the most edible. It’s the most delicious texture and taste however you prefer to cook it – whether that means al dente (the best way) or soft (ugh, you monster).

Each bite is like its own tiny meal, a small, starchy tube soaking in and scooping up morsels of sauce and veg. It has nooks and crannies to it, secrets full of food for your mouth to discover. Some pastas let you down; they fall apart or off your fork. Penne has form; it would never shame you like spaghetti does. It would never leave you asking: “What? WHAT?” when your nieces won’t stop laughing at the humiliating flicks of sauce on your forehead.

OK, so I’m well aware that there are a lot of penne haters out there. A quick Google search has penne among the worst rated of all the pasta shapes. My partner is a former chef who occasionally requests space in the pasta cupboard for something other than penne – perhaps a cannelloni, a little ravioli, or some cellentani – but I say no. I say find your own pasta cupboard. I say I’m 0.8% Italian according to that DNA test I did a few years ago so I know pasta. And I say I will live and die on my penne hill. I’m not afraid of the repercussions. I’m a rebel, ready to stand up for what I believe in. And I believe in penne.

And so, if, like me, you spend your mornings planning your lunches and your afternoons plotting dinner, allow me to inspire you with my favourite penne dishes. My number one is the ingenious classic: tomato puttanesca. I slow-roast Sardinian plum tomatoes with chilli, adding onion, olive oil and plenty of garlic for a thick, sweet, ambrosial meal. It’s quick, healthy, sustainable food that remains a pure joy year after year. The right tomato sauce with intensely Italian pasta on a plate can become a trip; a journey. And, in a period when travel is still a rare commodity, who would turn down a trip to Parma; the breadbasket of Italy, the home of parmesan, Parma ham, and Barilla pasta.

Or, if you’re in the mood for scrumptious and filling, another of my favourites is a broccoli and courgette pasta bake. Simple to prepare, you just cook the veg with the pasta, drain and add plenty of cheese – maybe some butter and mustard for an extra kick – before popping under the grill to get the cheese golden and bubbling. It’s a winner every time. Or, for a truly authentic taste of Italy, pesto alla genovese from the Liguria region is a double-carb sensation. Penne, potatoes and green beans smothered in pesto. It makes my mouth water just thinking about it. Is it lunchtime yet? I know what I’m having.

To find out more about Barilla and to learn about pasta shapes, visit barilla.com. For traditional recipes and pasta-cooking inspiration, try academiabarilla.it/en