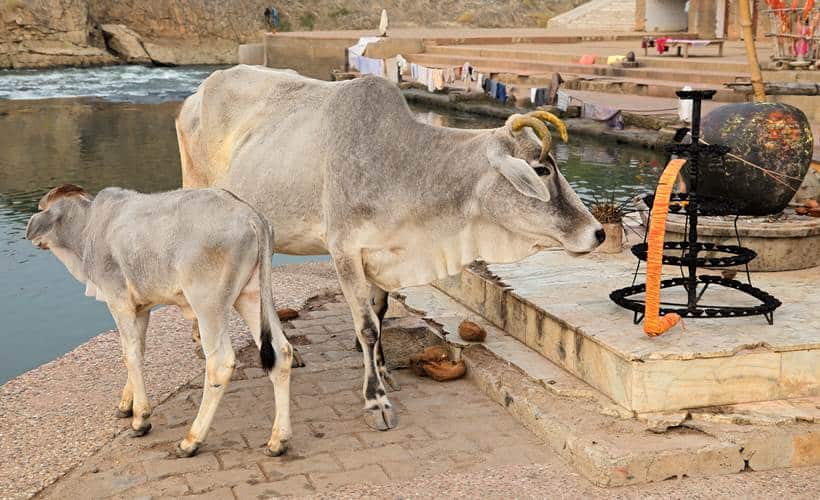 GRAPPLING WITH the issue of stubble burning and no permanent solution in sight till now, the Punjab government has now proposed to use paddy straw/stubble as fodder for cattle in gaushalas/cattle pounds (cow sheds). Punjab produces at least 20 million tonnes of paddy straw every year, most of which is burnt in the fields, mostly in October after paddy harvest.

However, experts say paddy straw has high silica and lignin content which reduces its digestive properties and thus should be given to cattle only after its urea and molasses treatment. “Apart from silica and lignin, higher selenium content in paddy straw also limits its use as fodder in animals as compared to wheat straw. However, if given in moderate quantities (upto 5 kg per animal per day), selenium poses no health hazard to the animal. Paddy straw also contains oxalates (2-2.5 per cent), which leads to calcium deficiency so mineral mixture should always be fed along with the straw,” said Ravinder Singh Grewal, director, livestock farms, Guru Angad Veterinary and Animal Sciences University (GADVASU).

A letter issued by the additional chief secretary (animal husbandry), Punjab, to all deputy commissioners, regarding the use of paddy straw in gaushalas, says that as per research conducted by GADVASU, Ludhiana, paddy straw can be used as feed for cattle after its “urea and molasses treatment”.
The letter says that if paddy straw residue produced in Punjab is used as cattle fodder in gaushalas, the pollution problem caused by stubble burning can be solved to a great extent.

The letter further says that each district in Punjab has to constitute a six-member committee to ensure that paddy straw is treated with urea and molasses and then ferried to gaushalas in the area. The committee will include: additional deputy commissioner (development), additional deputy commissioner (urban), chief agriculture officer, deputy director animal husbandry and an expert scientist from GADVASU.

The orders further state that the district administration should start using treated paddy straw as cattle fodder in local government gaushalas/cattle pounds from the current harvesting season itself and the committees should be constituted immediately.

‘ON EXPERIMENTAL BASIS’
The letter however, includes a word of caution. It says that “on an experimental basis”, the caretakers should first use very low quantity of treated paddy straw as cattle feed in government gaushalas and if cattle show any signs of sickness after consuming it, the experiment should be stopped with immediate effect.

The districts have also been ordered to make arrangements for collecting and storing paddy straw in government cattle pounds and further get it treated with urea and molasses only under the supervision of an expert from GADVASU.

The letter also clarifies that the entire cost for the process, including that of spray pumps and other logistics, has to be borne by district administration from its own funds.

Speaking to The Indian Express, V K Janjua, additional chief secretary (now transferred), animal husbandry, Punjab, who issued the letter to the districts proposing usage of paddy straw as cattle fodder in gaushalas, said the decision was taken following a research report submitted by the scientists of GADVASU as the part of the project ‘Preparation for control of stubble burning during kharif season 2021’.

Janjua said paddy straw was already being used as cattle feed in China and South East Asian countries. “But since it contains silica and selenium, we first need to treat it as per GADVASU research.”
Janjua said the experiment was first being started in Punjab on pilot basis and it won’t solve the stubble burning problem like a magic wand but the bigger plan was to transport paddy straw from Punjab to other states such as Gujarat and Maharashtra, to be used as cattle feed.

“Modalities are being worked out in coordination with the Government of India to transport paddy straw from Punjab to other states such as Gujarat and Maharashtra where it can be used as cattle feed. It will be a costly affair to transport it via trucks so train routes are being explored. A committee has been formed by the Centre to look into it,” he said.

“Districts will bear the cost of this experiment in Punjab as gaushalas are already being run by animal welfare societies who get funds,” he said.

Hailing the move, Punjab State Gau Sewa Commission chairman Sachin Sharma said the step would be beneficial for the environment and would also ensure fodder for cattle in abundance at gaushalas.

“The tractor trolleys available in gaushalas can be used for ferrying paddy straw so that it could be stored and used during fodder shortage. We also request farmers and other social organisations to cooperate and help in delivery of straw to gaushalas,” said Sharma.

There are nearly 460 private and 22 government gaushalas in Punjab.