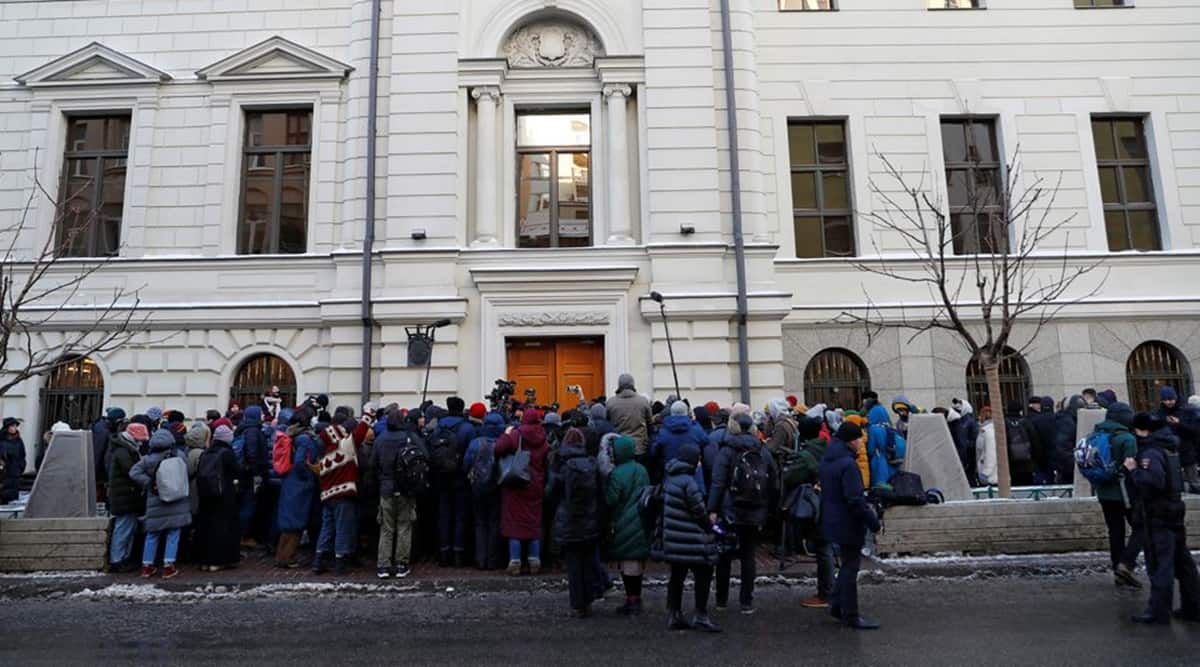 Russia’s Supreme Court on Tuesday ordered the closure of Memorial International, one of the country’s most prominent NGOs.

The organization faced charges under the Russia’s controversial NGO laws, which demands groups which are funded from abroad to clearly mark all their material as issued by “a foreign agent.”

Opposition groups, however, believe Memorial prompted the ire of the government by gathering information on millions killed by the state under Soviet dictator Josef Stalin.

Dozens of people gathered in freezing temperatures to support Memorial in front of the Supreme Court building in Moscow. Supporters chanted “Shame!” when hearing the verdict. The NGO tweeted images of police carrying away a protester.

‘False image of the USSR’

“It is obvious that Memorial creates a false image of the USSR as a terrorist state by speculating on the topic of political repression of the 20th century,” Zhafyarov said during Tuesday’s hearing.

A woman wearing a face mask reading “Memorial is not to be banned” attends a hearing of the Russian Supreme Court to consider the closure of the human rights group International Memorial in Moscow, Russia December 28, 2021. (Reuters)

He claimed that the extensive lists of victims of Stalinist repression, compiled by Memorial International, also contained “Nazi offenders with blood of Soviet citizens on their hands.”

“This is why we, the descendants of [WWII] victors, are forced to watch for attempts to rehabilitate traitors of the motherland and Nazi collaborators,” he said.

Prosecutors claimed the organization is not only hiding “the fact of filling the role of the foreign agent” but is also trying to influence the government’s policy and the public opinion.

Police officers detain a demonstrator as people gather in front of the Supreme Court of the Russian Federation, in Moscow, Russia, Tuesday, Dec. 28, 2021. (AP)

Memorial lawyer Henry Reznik described the prosecutor’s comments in favor of the ban as “reminiscent of 1930s.”

“I am absolutely convinced that this demand was illegal,” Reznik said. “But it is a political decision.”
Navalny’s case highlighted by Memorial activists

Memorial is Russia’s oldest human rights watchdog. It was founded in 1987, four years before the end of the Soviet Union, with Soviet dissident and Nobel laureate Andrei Sakharov serving as its chairman. It now consists of two legal entities — Memorial International, which deals with Soviet-era crimes, and Memorial Human Rights Center, which deals with political prisoners in modern-day Russia. The latter also speaks out in favor of Kremlin critic Alexei Navalny and other opponents of President Vladimir Putin.

Russian prosecutors are also pushing fora ban of the Human Rights Center . The ruling in that process is expected on Wednesday. This week, Memorial representative and Gulag historian Yuri Dmitriyev was sentenced to 15 years in a penal colony for allegedly abusing his adopted daughter.

Many view the push to ban Memorial as a bid to finally end the era of political freedoms started by former Soviet leader Mikhail Gorbachev in the late 1980s.

“What we saw today from the prosecutors who spoke in the Supreme Court was almost an indictment of these attempts to memorialize the Stalinist crimes,” he said. “Prosecutors argued that Russians should not pay attention to these crimes, they should not be ashamed and they should sort of revel in the legacy of the victory in World War II.”

Police officers unlock a man who chained himself to a pole in front of the Supreme Court of the Russian Federation in Moscow, Russia, Tuesday, Dec. 28, 2021. (AP)

Jan Raczynski, the chairman of Memorial International, told the Interfax news agency that his organization will appeal the verdict in Russia, and — if necessary — go to the European Court of Human Rights in Strasbourg.

Memorial will continue to operate as usual until all appeals against the ban are exhausted, he added.

“The prosecutors are not able to stop Memorial’s work,” he said, noting that there were “many people who identify with Memorial but do not belong to any organization.”

“Memorial is not just two organizations that are currently being targeted. There are many others, which are not listed as foreign agents,” he said.

Talking to DW, executive board member for Memorial in Germany Vera Ammer said the ban has not yet come into force.

“Of course, we will try to reverse the verdict, but I don’t think there is much of a chance of that,” she said.

She said that both the process against Memorial International and Memorial Human Rights Center were part of a “plan” to destroy them.

“And, by doing so, to send a signal to all of Russia that this kind of work is unwanted, including both the protection of human rights and the critical analysis of the past ,” Ammer added.

Putin himself criticized Memorial for advocating on behalf of “terrorist and extremist organizations” and pointed to mistakes in their data.

Gorbachev, however, spoke out in favor of the organization last month, saying its continued operation was useful to the state.

“Memorial’s activity has always been aimed at restoring historical justice, preserving the memory of hundreds of thousands of causalities, disallowing similar events in the present and the future,” Gorbachev said in a joint statement with a fellow Nobel Peace Prize winner Dmitry Muratov.

A group German watchdogs, including the German branch of Amnesty International, the Heinrich Böll Foundation, the Buchenwald and Mittelbau-Dora Memorials Foundation and the government agency in charge of dealing with crimes committed in former East Germany decried the ruling as a “heavy blow for the Russian society, the neighboring societies, and for all of Europe.”

By banning Memorial, the Russian state “gave a devastating account of itself — it is fighting the processing of its own history of injustice and wants to monopolize individual and collective memory.”

The ruling also “exposed the full absurdity of the law on ‘foreign agents’,” they said.