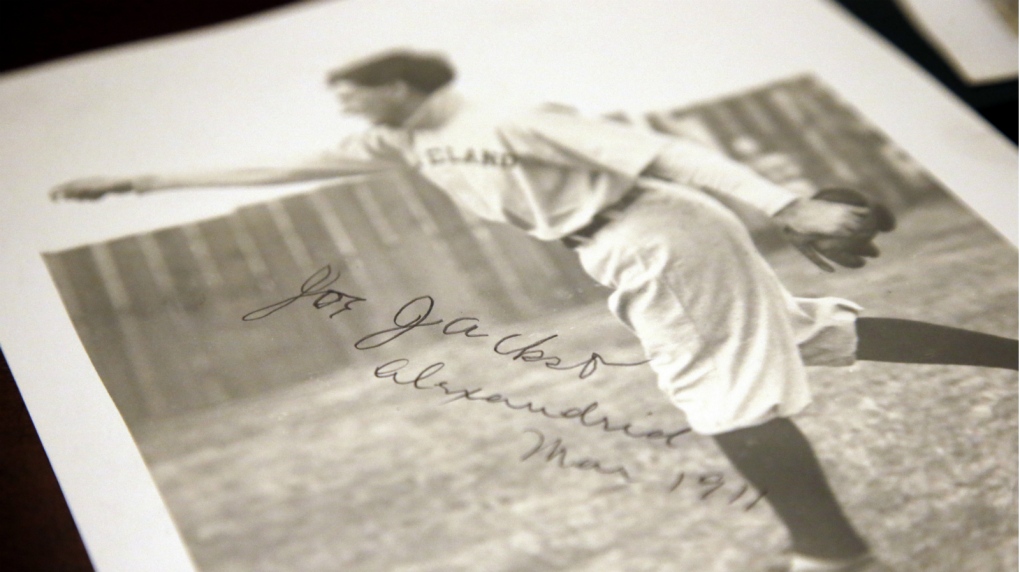 An autographed photo of baseball player “Shoeless Joe Jackson” has sold for a record US$1.47 million at auction, according to auction house Christies.


The 1911 photo is the only known photo in existence signed by the player, who was unable to formally read or write, it said.


Christies said on Twitter the auction price reached on Thursday was the highest ever for a signed sports photo, far exceeding the auction estimate of $200,000-$400,000.


The auction was held with Hunt Auctions, which specializes in vintage sports memorabilia.


In its description of the auction lot, Christies said the 8″ by 10″ photo by Frank W. Smith showed Jackson at spring training in Alexandria, Louisiana, in March 1911 and was of “outstanding” quality.


“Jackson’s labored and primitive signature formation is immediately recognizable due to his inability to formally read or write. As a result of Jackson’s relative illiteracy, there are scant few authentic examples of his autograph known to exist. To date, the offered Jackson signed image is the lone surviving example of any type.


“Based on the scarcity of signed images from this period, in general, coupled with the miniscule population of original Jackson autographs we cannot overstate the rarity of this offering,” it said.


“The ‘Shoeless’ Joe Jackson autographed photograph realized an exceptional, yet deserved, record price. The combination of unique scarcity, high condition grade, and unimpeachable primary source provenance all contributed to interest from bidders in the US and overseas,” Dave Hunt, President of Hunt Auctions, said in a news release.


Jackson was part of the 1917 Chicago White Sox’ World Championship-winning team but was banned from playing after he was implicated in fixing the 1919 World Series.


Christies says over his 13-year career, Jackson amassed over 1,700 hits, a .517 slugging percentage, and hit for a lifetime average of .356, which ranks as the third highest in MLB history.


The auction house quoted Babe Ruth as saying: “I copied Jackson’s style because I thought he was the greatest hitter I had ever seen, the greatest natural hitter I ever saw. He’s the guy who made me a hitter.”


The Baseball Hall of Fame says Jackson debuted for Philadelphia in 1908 before being traded to the Cleveland Naps in 1910 and the White Sox in the middle of the 1915 season.


It says Jackson was a “titan of the game” and “perhaps the most notable” of the eight White Sox players accused of throwing the World Series.


“Legend has it that as he was leaving the courthouse after giving his testimony and admitting to some form of involvement in the fix, a boy yelled out, ‘Say it ain’t so, Joe! Say it ain’t so!'” the Hall of Fame says.


“Joe Jackson represented the humble, working-class American and played with tremendous pride while experiencing a great amount of success over the duration of his career. Though Jackson is ineligible for the Hall of Fame, the Museum does honor his excellence by showcasing and preserving a number of his artifacts,” it says.


These include a pair of his shoes from 1919 — which, despite his nickname — the player wore, the Hall of Fame says.


A museum established to honor Jackson in his hometown of Greenville, South Carolina, says the player received the moniker after taking his shoes off due to blisters during a game in 1908. He went on to score a home run, the Shoeless Joe Jackson Museum says, and a fan of the opposing team shouted “you shoeless son-of-a-gun.” The museum says it was the only time Jackson played without footwear.