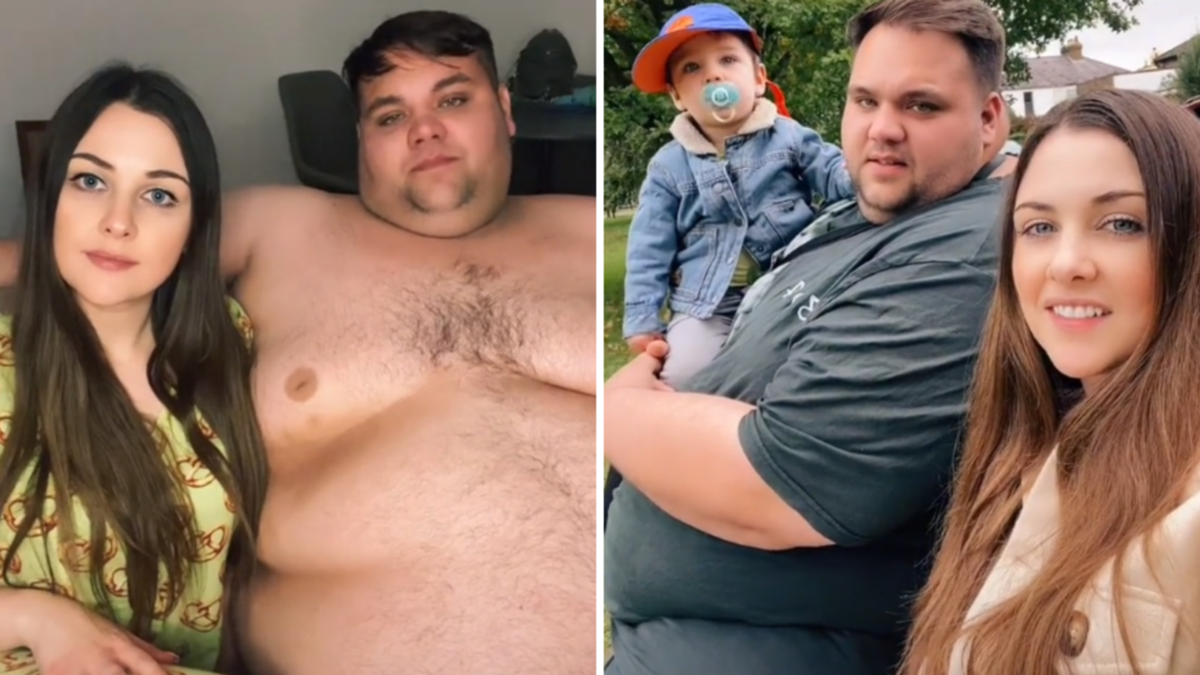 When Australian woman Sienna Keera packed her bags and moved across the world for a man she had only met once, her size-gap romance quickly attracted global attention.

A slim size six, Sienna made the move to the UK permanent after spending five weeks travelling with plus-size actor George Keywood.

Now, Sienna tells 7Life, she wishes the trolls would leave their relationship alone.

WATCH Sienna and George fall in love in the video above

The seeds of their unlikely romance were sown in 2018.

Sienna was watching the BBC sitcom People Just Do Nothing and was stopped in her tracks at the sight of British actor George Keywood.

Sienna knew nothing about George, who plays the character “Craig” on the comedy – but she was attracted to him.

The reality is that Sienna finds plus-size men sexy – something many in society can’t seem to get their heads around.

Even though George is considered morbidly obese, Sienna says he is ‘her type’.

Quickly taking to Google to discover more about George, Sienna’s search led her to his Instagram account where the then 23-year-old slid into his DMs.

“I hadn’t even finished watching the first season before sending him a message,” she tells 7Life.

But her message to George wasn’t flirty.

“Craig is my favourite character,” she typed before hitting send.

He soon replied and so began a whirlwind relationship.

“He messaged me back soon after saying ‘thanks babe’ and he liked a bunch of my Instagram photos so I knew he was keen,” Sienna explains.

For six months, the pair messaged back and forth until Sienna took the plunge and travelled to the UK to meet George in person.

“I had a feeling we would get along really well and have some sort of special impact on each other’s lives,” she admits.

15,000kms later, Sienna flew into the arms of her plus-size love interest.

She admits, upon arrival, she invited him to her Airbnb and the pair stayed up drinking and talking “all night long”.

An instant attraction, Sienna claims “his gorgeous face, his big sexy belly, his thick thighs” were three of George’s most attractive qualities.

“She loves fatties,” George says in one of the couple’s TikTok videos.

For five weeks the couple travelled around Europe falling more in love with each other.

And Sienna didn’t spend long at home before she made the permanent move to London in May 2019.

“[My family] were worried and advised me against it, but they knew I was in love and trusted I would make the right decision for myself,” Sienna says.

And she has never regretted the decision to move.

In fact, she and George soon wed and now they have a son Oliver.

Like many young people, the new mum took to social media to share her happiness, but she was quickly met with trolls who branded Sienna a “gold-digger”.

And the duo’s loved-up videos attracted unwanted attention with many comments poking fun at the weight difference between the pair.

Now, Sienna is fed up with the bullies.

“I’ll delete and block trolls, but it’s impossible to keep up with all the hate comments,” she says.

Even after the birth of their son, the keyboard warriors appear worse than ever.

“George still gets fat-shamed and some people even think our entire relationship is a facade and that our son isn’t even ours!” says Sienna.

“People have some crazy conspiracy theories that TikTok hires George and I as actors and that our child is someone else’s. It’s madness!” she adds.

Sienna is grateful the hate remains behind the computer screen with the mum admitting no one has ever said anything about the couple in person.

However, she admits “people stare all the time”.

“I feel anxious and self-conscious at times when people stare but I’ve gotten used to it,” she reveals.

Through the tirade of hate, their love and devotion for each other has remained solid.

“I know most girls aren’t attracted to big guys like George, even some my friends made it very clear they thought I could do better, as George is not what society deems ‘typically attractive’ – but I don’t care what people think,” she goes on.

“The main thing is that we believe in each other. We love each other, and no-ones opinion can change that,” she adds.

As for others seeking a plus-size romance, Sienna says there is someone out there for everyone.

“If you’re a plus-sized person looking for love, know that you deserve it and you can find it!” Sienna says.

“If you are a smaller person attracted to larger people, you have nothing to be ashamed of and you should embrace what you’re attracted to and just go for it.”