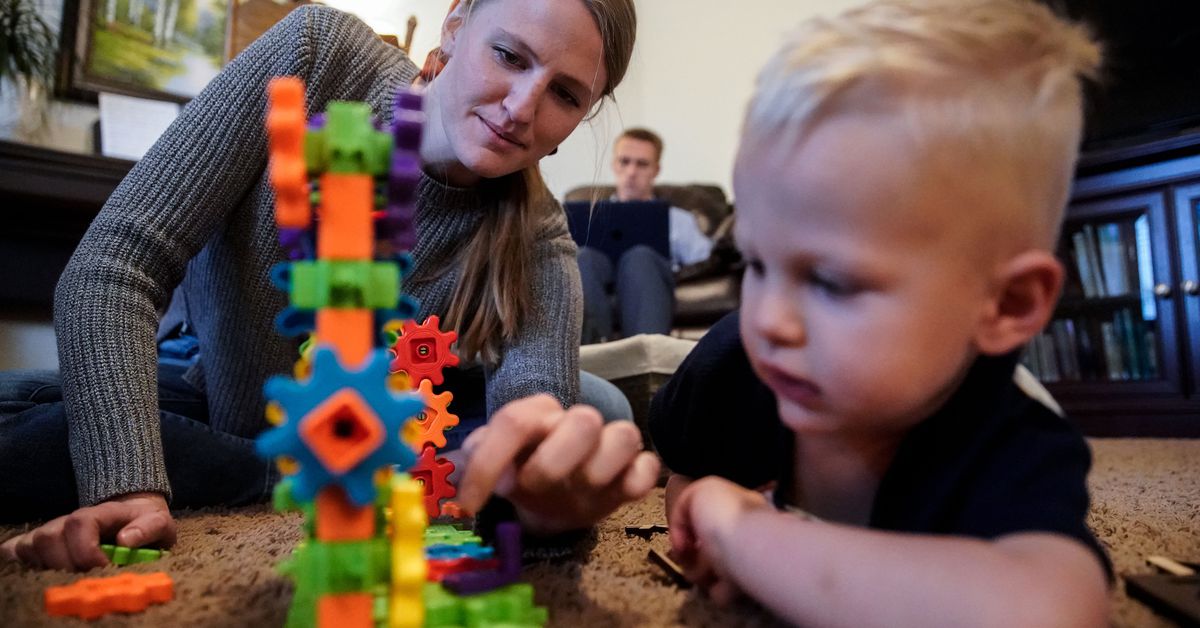 It was still early in the pandemic, just two months after nationwide lockdowns had begun, and the 27-year-old mom and her husband were both still employed.

That would change, however, and by the time the second stimulus payment hit the couple’s bank account, that guilt had turned to gratitude. George is equally appreciative of the monthly child tax credits that the couple has received since July.

“I’ve never been on the receiving side (of government assistance); this is a totally new experience,” she said.

In this, the George family, who lives in Provo, Utah, are much like the majority of respondents in the 2021 American Family Survey, who said the stimulus checks they received during the pandemic made a significant difference in their lives.

The survey, released Tuesday in Washington, D.C., by the Deseret News and Brigham Young University’s Center for the Study of Elections and Democracy, is an annual nationally representative study on how Americans live, love, prosper and struggle amid current events.

This year’s survey of 3,000 adults was fielded by YouGov June 25 through July 8, shortly before the delta variant of COVID-19 became widespread, and near the time the government began sending monthly payments to families with young children. The margin of error is plus or minus 2 percentage points.

One of the few government initiatives that enjoyed bipartisan support, the stimulus payments were dispersed under two ideologically distant presidents — Joe Biden and Donald Trump — but the purpose in both 2020 and 2021 was the same: to help both American families and the nation’s economy.

The American Family Survey, now in its seventh year, found that 84% of Americans received the checks and revealed how they were spent. Here’s a look at the impact of the checks on families and the nation’s economy.

According to the report, middle-income families were the most likely to receive stimulus checks, the amount of which varied, depending on the number of children in the household. The IRS issued three rounds of checks: $1,200 beginning in April 2020, $600 beginning in December 2020 and $1,400 beginning in March 2021.

The American Family Survey found that the checks were needed, not only by low-income families, but also by a notable number of people with the highest incomes who qualified.

The need for assistance was highest among single parents, who were more likely to say they had experienced a serious economic crisis during the pandemic, and also the most likely to still be continuing to struggle.

The economic challenges faced by Americans during the pandemic were exacerbated by changes in employment caused by widespread lockdowns. Seventeen percent of men and 15% of women who worked full time prior to March 2020 reported being temporarily laid off during the pandemic, and another 7% to 8% said they lost their job permanently.

That’s what happened in the George household.

Before the pandemic, Elissa George was working for a nonprofit in India, which closed in the summer of 2020. Her husband, who had worked for The Church of Jesus Christ of Latter-day Saints, is now in school, pursuing an MBA.

At first, both husband and wife were working, and they had savings they could tap for living expenses. In fact, like 3% of American Family Survey respondents, they used part of the first stimulus check to help others. George started a GoFundMe campaign to buy food for families in India who had suffered hardship because of COVID-19, and the couple contributed some of their stimulus money to that campaign.

But by the time the second round of checks were issued, they needed the money for themselves. George did freelance copywriting for a while to try to replace her previous income, and then started an e-commerce business. But with her husband in school full time, she is now the primary breadwinner, and the stimulus money mattered.

“Now I am beyond grateful for the stimulus checks,” she said.

According to the report, which describes disparate effects of COVID-19 as “a tale of two pandemics,” Americans’ income and marital status helped to define their experience of the past 18 months. Economic hardships were not evenly distributed, the researchers said, and some people even reported that their finances had improved.

Surprising researchers, the number of Americans who said they had experienced a serious economic hardship — such as going hungry, being unable to pay bills or moving in with other people out of necessity — declined from previous years. This was true across all income levels.

“Every income level experienced at least a 14-point drop or more, relative to 2019 levels,” the researchers wrote, adding, “pandemic aid appeared to make a difference for many families.”

As for how the stimulus checks were spent, married Americans were more likely to put the money into savings, which was a concern of economists since the aid package, in addition to helping families, was also meant to be adrenaline for the U.S. economy.

Overall, 29% of respondents said they put some of their money in savings, although that percentage dropped to 18% among single parents.

But like single people, married couples spent most of the money on household expenses and rent or mortgages. Across the board, only 8% of stimulus money went to travel, entertainment and retail purchases, the survey found.

Even with the checks, the economic circumstances of more than 1 in 5 American families got worse during the pandemic. More than a quarter of low-income families (28%) — defined as households making $40,000 or less — said their financial well-being has deteriorated since March 2020, as did 14% of high-income families (those making $80,000 or more) and 21% of middle-income families ($40,000-$80,000). Again, marital status revealed a divide.

Not surprisingly, the survey revealed a partisan divide when it came to financial assistance distributed because of COVID-19.

“Republicans (43%) are less likely to favor any kind of aid. Democrats favor both helping families directly and spending money on programs and institutions (61% favor both approaches),” the report said.

Democrats were also more likely to choose economic concerns — the cost of raising a child and work demands — when asked about the top challenges facing families.

But even among Republicans, financial concerns loom large for parents, which may have contributed to the decision by 29% of all respondents to put at least some of the stimulus into savings.

Most notably, large shares of Americans are worried about inflation, the rising costs of goods and services.

“Nothing else — lack of government assistance, national debt or unemployment, drew as much concern. Thirty-nine percent of the public is concerned about inflation. None of the other factors concerned more than 30% of the public,” the report said.