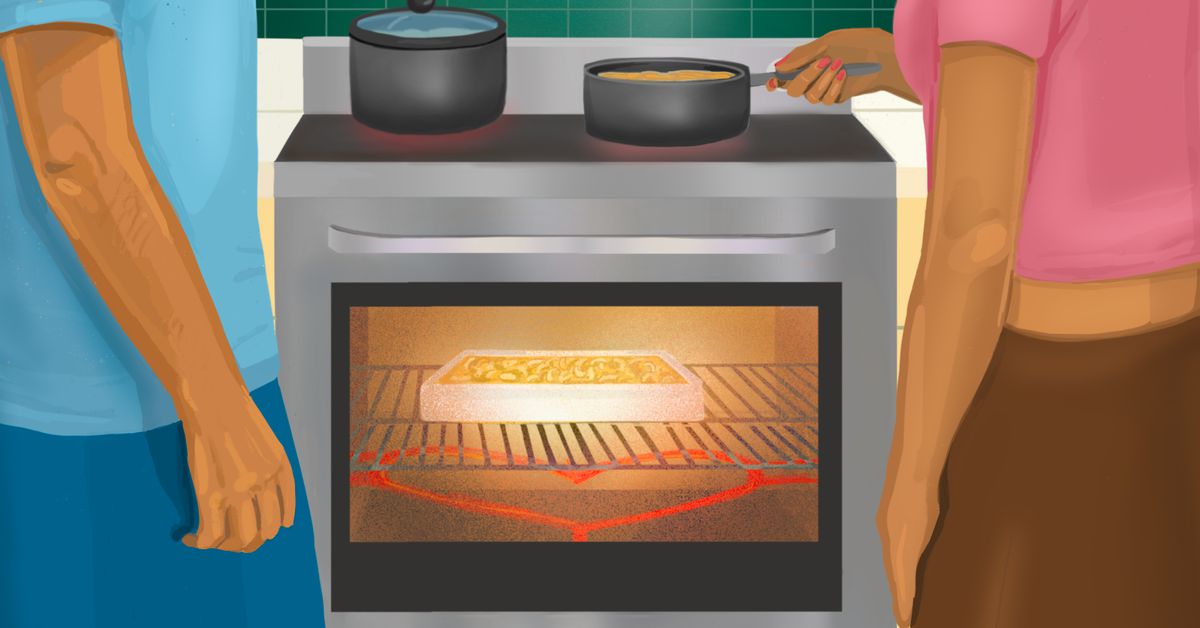 Editor’s note: Thanksgiving traces its origins to an uneasy, temporary alliance between 17th-century English settlers and members of the Wampanoag Confederacy. This year, Eater is choosing to acknowledge that history in our coverage of the holiday.

For almost as long as I can remember, I’ve hosted Thanksgiving with my good friend and former roommate Daniela. Our “Orphan’s Thanksgiving” started in our early 20s in New York, when we were too cash-strapped to afford expensive plane tickets back home, and has always been a casual, potluck-style affair designed for fellow holiday stragglers and non-believers.

By virtue of the potluck format, the menu is somewhat chaotic — we send out a spreadsheet for attendees to sign up for dishes, including turkey, which I refuse to cook because turkey, no matter how intently you spatchcock it or brine it or slow-roast it or deep-fry it, sucks. (I make ham instead.) The only rule is that you must bring something — booze, takeout containers for leftovers, a side dish — in order to participate the feast.

Several years ago, Daniela began dating a man named John. John has many admirable qualities, but cooking is not among them. (This is a man who once identified a mango as “I don’t know, maybe a big nectarine?”) Culinary shortcomings notwithstanding, John managed to snag a coveted Orphan’s Thanksgiving invitation early in his romance, and knew the pressure was on. Thanksgiving is a big deal to Daniela (and me), and he felt an obligation to show up strong.

This is where John made probably the smartest decision in his relationship: He turned to Martha. Stewart, that is, the undisputed champion of holiday entertaining. Martha’s self-described “Perfect Macaroni and Cheese” called to John like a Greek Siren because, in his words, “it says ‘perfect’ in the name,” and also “looked pretty easy.”

Both of these assessments would prove largely true. That first year, John entered the kitchen a bumbling caterpillar, and, with proper coaching from Daniela, managed to emerge as a homemade-breadcrumb-making, block-of-cheese-grating, silken-bechamel-whisking butterfly. (To see John’s culinary metamorphosis unfold in real time, I highly recommend spending a few minutes watching Daniela’s expertly-produced “Hot Seat” Instagram Stories, which I can confirm are absolutely not a bit.)

Right out of the gate, John/Martha’s mac was a huge hit. How could it fail? With a rich, velvety cheese sauce, a gentle whisper of fresh nutmeg and black pepper, and a buttery top layer of golden breadcrumbs, this is, in fact, the perfect mac and cheese. And because Martha is Martha, the recipe is truly foolproof. Take it from John, a certified fool in the kitchen, and me, a person who writes cookbooks for a living.

Martha, stern-yet-benevolent ruler of Thanksgiving, includes plenty of helpful tricks. Her cheese selection — sharp white Cheddar, Gruyere, and pecorino Romano — is carefully considered to counterbalance the milky white sauce and pasta (yellow and extra-sharp Cheddar, she claims, can also get grainy when melted). She patiently describes how, during the bechamel-making step, the starch from the cooked flour expands in the milk, creating a thick, creamy sauce that stays smooth when you whisk in the cheese. And she insists that you undercook your pasta (“a good Italian brand”) and rinse it in cold water to wash off excess starch. “You might think that starch would be useful in further thickening the casserole, but it isn’t,” she admonishes, explaining that “as it bakes, that extra starch merely expands and lends a mealy texture to your sauce.”

All of these tips, along with clear instructions and a relatively straightforward ingredient list, mean that anyone can master this recipe. In the decade or so since John’s first Thanksgiving, his mac and cheese has become our most-requested side dish. He also managed to marry Daniela and start a family with her in California, where we continue our Orphan’s potluck tradition to this day. He might still struggle with the technique (“the hardest part is mixing the flour, no wait, the milk, no, I mean the flour, into the butter”), but Martha’s mac has earned a permanent place at our table.

Jamie Feldmar is a Los Angeles-based writer, editor, and cookbook author.
Cindy Echevarria is a freelance illustrator based in Miami. She’s inspired by bright color palettes, badass women, and the tropics.