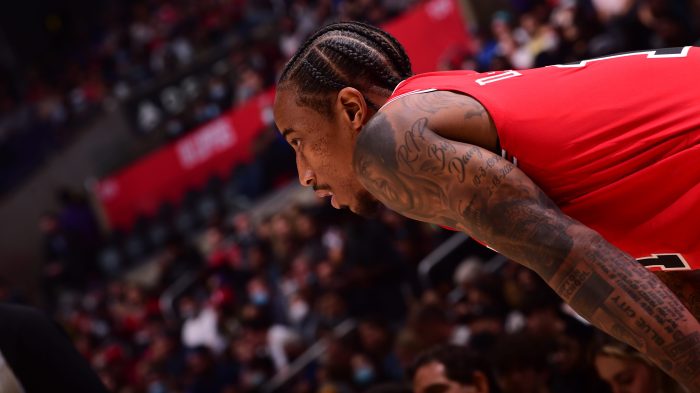 DeMar DeRozan said his father Frank was a great dad because he never missed a basketball game or practice. So to ensure that “The Big Dog” will continue to have a presence in every game and practice, the Chicago Bulls guard inked a left shoulder tattoo of a memorable photo of his father.

“It’s just a constant reminder every time I go out there and play that you could see him. I wouldn’t be doing this if it wasn’t for him, so I owe everything to him,” DeRozan told The Undefeated last week, a couple of days before he played in his hometown of Los Angeles and scored 35 points against the Clippers on Sunday night.

Frank DeRozan died on Feb. 19 after battling several longtime illnesses. The San Antonio Express-News reported that one ailment was a kidney condition. The father of the four-time NBA All-Star was the first African American to play varsity sports at Vidalia High School in Vidalia, Louisiana, according to the Concordia Sentinel.

DeRozan said his father was a former videographer for the city of Compton in southern Los Angeles County. “The Big Dog,” as he was called by loved ones, was known for his tireless work ethic and always providing for his family. DeRozan said that his father’s lessons still resonate with him today as a married father of two young girls and as an NBA player.

“He worked his butt off with everything I ever saw him to provide for the family,” said DeRozan, 32. “Growing up, we didn’t have much. But he always made sure there was a roof over our head and there was food when needed. He was a protector of the family. Just me watching that was everything for me. …

“He taught me how to be a man. Be disciplined. Never complain. You don’t want nobody to feel sorry for you. Understand if you want something in life, you can go get it. He gave me the ultimate confidence and belief in myself. No matter how bad something seems or it could be, there’s always a brighter side to it if you just keep pushing. You just never give up.”

Frank DeRozan was a regular at Toronto Raptors games when his son starred for the franchise from 2009 to 2018. But in recent years, it was DeRozan who was going to Los Angeles regularly to visit his ailing father while playing for the Raptors and San Antonio Spurs. It was commonplace for DeRozan to quietly take a private plane on off days to spend time with his father, even taking a trip once from Boston to Los Angeles.

While playing for the Spurs, DeRozan missed two games in January to visit his father in Los Angeles just before he died. Looking back, those trips are now invaluable.

“If it was just for a day, I would go just to sit with him,” DeRozan said. “Just be that motivation … for him to keep pushing and keep kicking. It was tough on him. So, there were a lot of games where I showed up the day of the game and played. I never made a big deal of it. Nobody even knew, but I just wanted to get every opportunity I could just to spend with him, just to be around him because you just never knew, and I’m glad I did that.”

Bulls general manager Marc Eversley worked with DeRozan previously with the Raptors and said the bond with his father “meant everything to DeMar.”

“Frank DeRozan helped shape the man that DeMar has become,” Eversley told The Undefeated. “He’s family first. He’s fiercely loyal. He’s ultracompetitive. He wants nothing more than to win and do it the right way. You can see it on a daily basis.”

Tattoo artist Steve Wiebe is known for being quite popular for his detail, most notably with face portraits. The Canadian’s clients include NBA players such as DeRozan, Kevin Durant and Damian Lillard, rappers such as Future and Nipsey Hussle, and other celebrities and pro athletes. Wiebe also tatted a face portrait of Hussle on his partner, actress Lauren London, after the rapper was killed in 2019.

Wiebe said he tatted on both of DeRozan’s arms over the course of 10-plus sessions in recent years. DeRozan approached him about doing a tattoo of his late father on his left shoulder in June. He also wanted the words “RIP Big Dog” on his left triceps. DeRozan searched through several pictures before finding an “old-school” photo of his father that he loved. 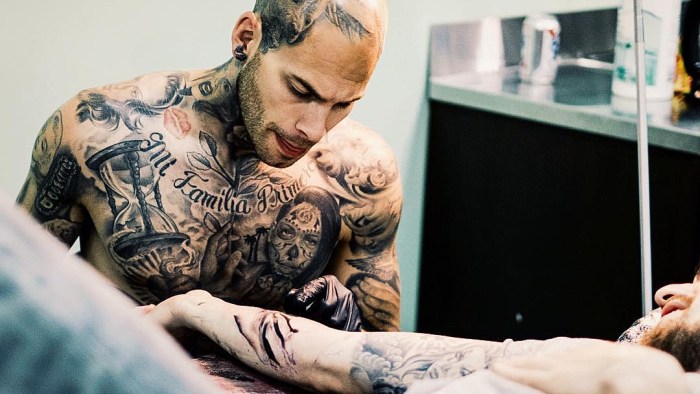 “It was just one of those pictures I found going through the photos after he passed. And it was just that one that stuck out to me with the Afro, old school, just the perfect depiction of him. I wanted that for sure,” DeRozan said.

Wiebe said he has done more than five tattoos for DeRozan, including one of Malcolm X and another of the Joker. The father tattoo took about four hours. The “RIP Big Dog” tattoo was done a couple of weeks later.

“With DeMar, usually we always discuss his ideas in person,” Wiebe said. “So, I don’t usually know what I’m going to do before I get there. But when I got there, he said he had a portrait of his dad and that he wanted that.”

Wiebe said that while DeRozan rarely shows any emotion, he could tell that the tattoo of his father meant a lot to him when it was completed. It can also be seen when the shooting guard is wearing his Bulls jersey.

“It was kind of like watching the movie Toy Story for the first time, just how perfect and how detailed the art was. It was amazing. It also means everything to my family because everybody knows what he meant to them and especially what he meant to me,” DeRozan said.

Eversley and the Bulls hope that DeRozan’s scoring and veteran leadership can be the missing piece that brings the storied franchise back to becoming a power in the Eastern Conference. DeRozan said it was very instrumental to him that Eversley came to Los Angeles during the offseason to speak to him face to face during free agency. Days later, DeRozan agreed to a sign-and-trade deal with the Bulls on Aug. 11 for a three-year, $85 million contract. DeRozan is currently ranked 10th among the top active leading scorers in NBA history.

Eversley says DeRozan is motivated to show the NBA world he is still one of the elite players.

“He saw Chicago as a place where he could once again show people on a national level what he is capable of doing at the highest level,” Eversley said. “He looks like he is having fun and certainly winning has helped fuel that. We sold him on the chance to win and reinvent himself. He had a choice this summer and we’re thrilled that he chose us.”

DeRozan joined All-Star guard and Olympic gold medalist Zach LaVine, his former University of Southern California teammate Nikola Vucevic and newcomer guards Lonzo Ball and Alex Caruso in Chicago. The Bulls haven’t been to the postseason since 2017 and haven’t been to the Eastern Conference finals in 10 years. DeRozan is averaging a team-leading 26.1 points per game, sixth-best in the NBA, entering Monday’s contest against the Lakers in Los Angeles.

DeRozan says he is enjoying the Bulls environment that he described as egoless, young, energetic, positive and free.

DeRozan’s family and loved ones were able to see the tattoo in person when the Bulls played in Los Angeles this week, an emotional homecoming for DeRozan.

“He was at every game,” DeRozan told reporters after Sunday’s game. “Tonight was one of those games that I wish he was here.”

While the tattoo of DeRozan’s father will always provide a reminder, DeRozan says, he still hasn’t properly grieved.

“I still feel like I haven’t dealt with it personally. Just trying to keep everybody around me up, especially my mom, my kids, the whole family, they took it hard. And growing up, my dad always made me feel like I was the man after him. I just kind of took on that onus. At some point, it’ll hit me and I’ll deal with it whatever way I need to deal with it, even if it’s just sitting in the room by myself, just crying whenever that day may come,” DeRozan said.

Marc J. Spears is the senior NBA writer for The Undefeated. He used to be able to dunk on you, but he hasn’t been able to in years and his knees still hurt.