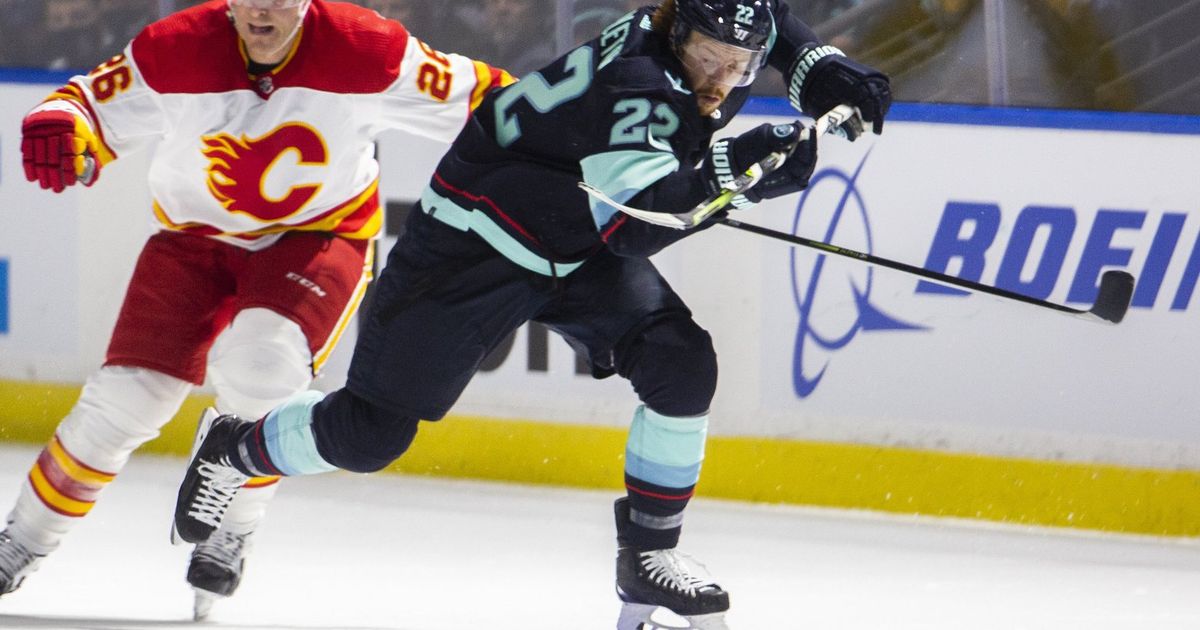 Monday’s roster decisions aren’t as cut and dry as they may have been even a week ago.

Calle Jarnkrok’s arrival on the COVID protocol list at the end of last week threw a wrench into some of those decisions. If he isn’t available in Vegas, or any other point in the five-game road trip to open the season, that could change the way they approach the roster.

Monday is the last day of practice before the games begin for real, and the Kraken need a 23-man roster. Assuming Colin Blackwell — who hasn’t been on the ice at all and has been a man of mystery with zero updates throughout camp — starts on injured reserve and Yanni Gourde doesn’t, and Jarnkrok misses at least one game but stays on the roster, that means there’s 21 roster spots filled with two to go.

Gourde would be one of the 12 regular forwards when he’s ready to go, as will Jarnkrok, so one of those extra spots should be a forward. They have three defensemen battling for the seventh spot, and all would have to be exposed to waivers.

If they do start Gourde on injured reserve for that extra roster spot, he will have to remain unavailable for a period “not less than seven days.” That would mean he wouldn’t be able to play until the game in New Jersey on October 19, the second of a back-to-back. If his progression hasn’t advanced to the point he could play earlier on the road trip, that might be the move.

Looking at the locks to make the team, they have some questions:

They’ll carry a 13th forward for certain — who will play until Gourde returns at least, and will probably be Mason Appleton — and if Jarnkrok is out but doesn’t go to injured reserve, likely a 14th. That’s two more spots to reach 22.

That leaves room for probably one defenseman. Jeremy Lauzon or Will Borgen could be picked up on waivers, so there’s a risk there.

Here are all the players battling for one of those last spots, and what they bring.

Appleton started camp strong but struggled in possession situations in his last two games, but is known as a strong forechecker. He has enough experience he could play alongside Tanev and Sheahan for a tough line to play against.

One thing the Kraken may do is, if Jarnkrok remains in Covid protocol on Tuesday, have Gourde was the 13th forward healthy scratch requirement, then once Jarnkrok returns, Gourde and one of Appleton or Bastian is a scratch until Gourde plays. In that case, they could send one of the extra forwards to Charlotte — likely Bastian — through waivers. They could then carry an eighth defender, but by that point, whoever they cut from camp on the defensive side will have already had to have gone through waivers.

If Jarnkrok is out along with Gourde, there’s a good chance both Appleton and Bastian play in the opening game in Vegas. That could mean Appleton skating with Geekie and Donato, while Donskoi moves to play with the two Swedes.

In practice, Bastian primarily plays with Sheahan and Tanev, and that would likely be the same. Once Jarnkrok is back — or, if Gourde returns first — Bastian is likely the odd man out, just with less experience than Appleton at the NHL level.

If it weren’t for the Jarnkrok situation, there’s a good chance the Kraken was leaning heavily toward carrying eight defensemen. Lauzon is a solid bet to be snagged on the waiver wire as a guy who played against top lines last season.

Lauzon has been on nearly every penalty kill unit through the practices and when he’s played in games. He might have too much value to cut regardless of the forward situation.

Borgen hasn’t stood out a ton in the preseason games, but that’s not always terrible for a defenseman. One of the defensemen are going to go regardless, if the Kraken carries eight defenders or not, and after Lauzon, Borgen is the next most likely to be claimed off waivers.

He also has another year after this making just $900,000, to be a bit more enticing on waivers.

Cholowski being one of two right-handed shots keeps him in play here, especially if Hakstol and co decide they want his puck-moving skills available to them. Yet, he’s the only defender left on a two-way deal, so that might work against him.

He got some looks early in camp, even on the power play, but that’s tapered off a bit as Lauzon’s seem more time.