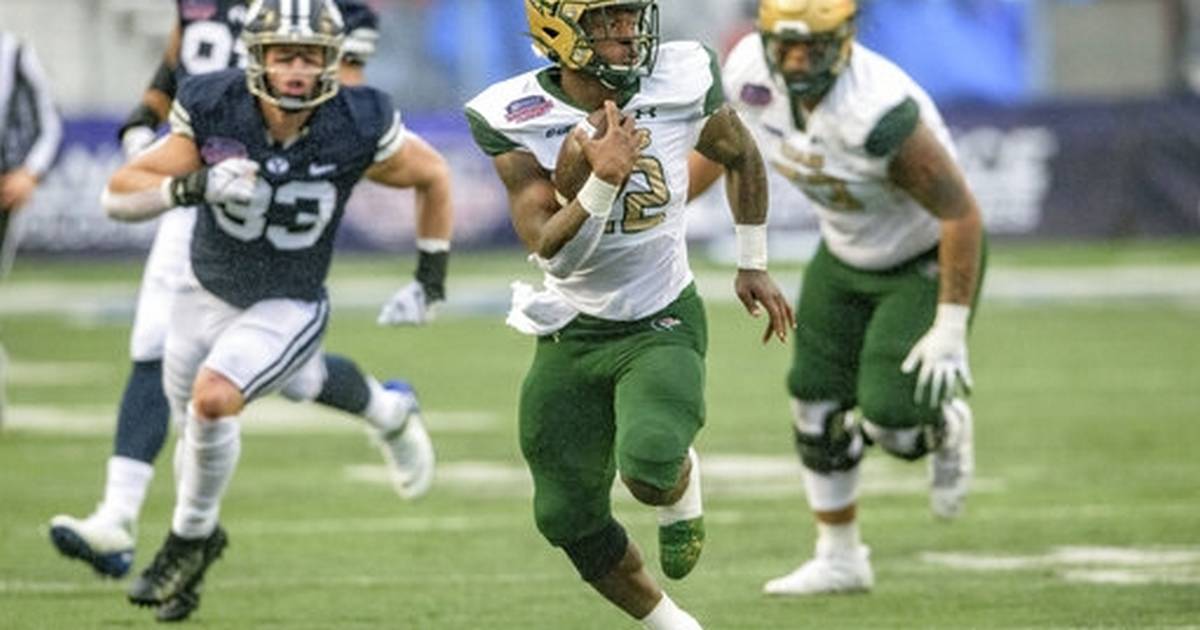 SHREVEPORT, La. — Dylan Hopkins broke the Independence Bowl record for completion percentage, connecting on 19 of 23 passes for 189 yards and three touchdowns in UAB’s 31-28 victory over No. 12 BYU on Saturday.

With UAB (9-4) facing fourth-and-7 with six minutes remaining, coach Bill Clark passed on a field-goal attempt, and Hopkins threw a 14-yard, go-ahead touchdown pass to Trea Shropshire, the only player from Louisiana on either roster.

BYU (10-3) appeared to be in good position to at least tie it game, but Samson Nacua fumbled after making a catch inside UAB’s 25 with 3:36 remaining.

DeWayne McBride ran for 183 yards and a score on 28 carries for UAB.

BYU and running back Tyler Allgeier fought back from a 14-point deficit, tying it twice and eventually taking the lead in the fourth quarter. Allgeier ran for 192 yards and had three touchdowns.

Allgeier ripped off a 62-yard touchdown run to tie it again 1:17 into the third quarter. His 1-yard run put the Cougars up 28-24 on the second play of the fourth quarter.

Legas came in when starter Logan Bonner suffered a knee injury during the first quarter. Andrew Peasley was Bonner’s backup throughout the season, but was ruled out prior to kickoff due to a shoulder injury he suffered Nov. 26 against New Mexico.

Legas’ only action this season was late in the New Mexico game. The sophomore’s first collegiate pass couldn’t have gone any better when he connected with Deven Thompkins on a 62-yard touchdown strike to tie it at 7.

Thompkins got a couple steps on Beavers defensive back Jaydon Grant, hauled it in at the Oregon State 25 and was gone to the end zone. The senior had six receptions for 115 yards and set a single-season school record with 102 catches.

Legas also had a 5-yard scoring toss to Brandon Bowling with under four minutes remaining in the third quarter to extend the Aggies lead to 24-13. Legas completed 11 of 20 passes for 171 yards and an interception. He also had a 34-yard reception on a double pass from Derek Wright.

MOBILE, Ala. — Malik Willis passed for 231 yards and accounted for five touchdowns and Liberty rolled over Eastern Michigan in the LendingTree Bowl.

The Flames (8-5) improved to 3-0 in bowls, tying Appalachian State for the best postseason start by an FBS team.

Liberty also got a defensive touchdown in the first quarter on Skyler Thomas’ 27-yard interception return. Thomas deflected a short pass by Ben Bryant, caught the ball out and ran to the end zone.

ALBUQUERQUE, N.M. — Jordan Mims ran for 165 yards and two touchdown and caught five passes for 71 yards and another score to help Fresno State beat UTEP in the New Mexico Bowl.

Fresno State (10-3) won the bowl game for the first time in three tries.

Jake Haener was 26 of 41 for 286 yards and a touchdown. His status had been somewhat in doubt when he briefly entered the transfer portal after coach Kalen DeBoer took the job at Washington.

The Miners (7-6) pulled to 26-24 early in the fourth quarter on Calvin Brownholtz’s 51-yard touchdown pass to Trent Thompson.

But Fresno State got a field goal, followed by a UTEP safety, before the Bulldogs ran out the clock.

UTEP’s Gavin Hardison threw for 252 yards and a touchdown.

Zappe finished the season with 5,977 yards and 62 touchdowns for the Hilltoppers (9-5). He topped the previous marks of 5,833 yards set by Texas Tech’s B.J. Symons in 2003 and 60 touchdowns set by LSU’s Joe Burrow in the Tigers’ run to the national championship in the 2019 season.

Jerreth Sterns caught 13 passes for 184 yards and three touchdowns, finishing his season with 150 catches for 1,902 yards. Mitchell Tinsley had two TD catches for the Hilltoppers and Noah Whittington needed only seven carries to rush for 150 yards – 86 of those on a third-quarter scoring run.

Chase Brice passed for 317 yards and four touchdowns for Appalachian State (10-4) before leaving in the fourth quarter with a right leg injury. It was the first loss in seven bowl games for the Mountaineers.

ATLANTA — Cory Fields threw for four touchdowns, three to Shaquan Davis, to lead South Carolina State past Jackson State in the Celebration Bowl in a game considered to be the national championship of historically Black colleges and universities.