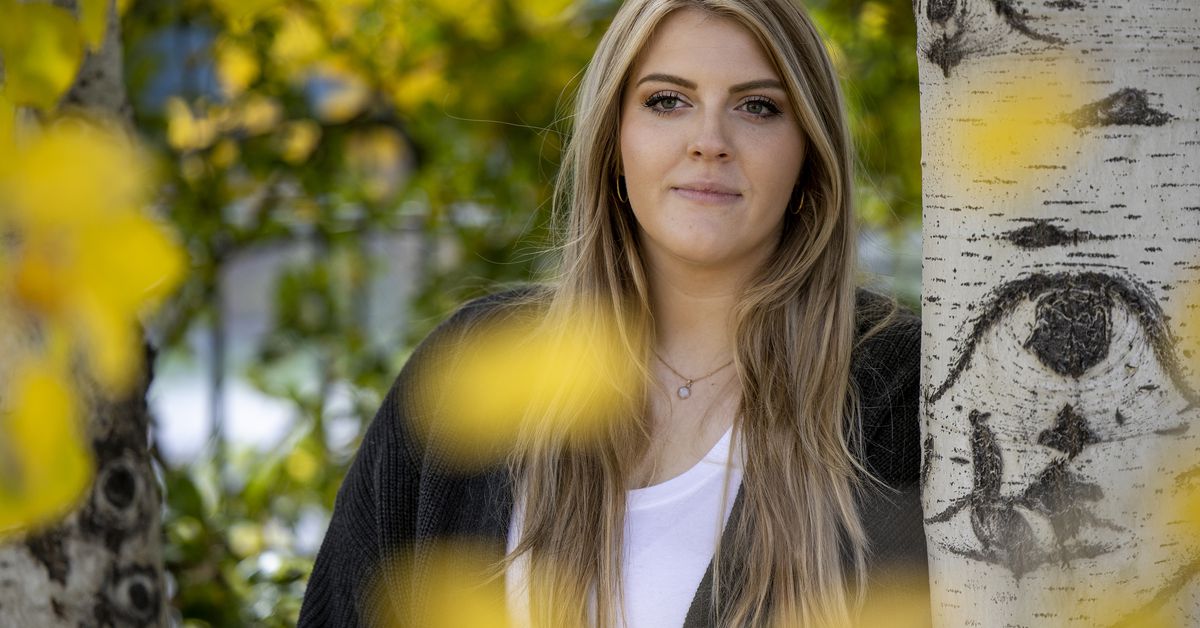 Alexa Minson entered Utah’s foster care system in her late teens after she and two younger siblings endured what she said were years of their parents’ physical and emotional abuse.

They also witnessed domestic violence between their parents and threats by their father that if they went to police, they would be separated and they would never see one another again. At one point, he threatened to kill himself, going so far to write a suicide note, Minson said.

“As children, we tried to reach out and never really got the help that we needed until I was like 16,” she said.

Then working as a nanny, Minson observed that the family dynamics in that household were markedly different from her own.

“I talked to that family about what was going on in my home,” she said. The couple immediately contacted police and within 24 hours, Minson and her siblings were removed from their parents and placed in state care.

At 22, Minson is still connected to Utah’s foster care system, where she can receive limited services through the Division of Child and Family Services’ Transition to Adult Living Program, or TAL, until she turns 23.

The program helps her with the supports that parents typically provide for their children at her age.

“One of the things that I needed done was some dental work and so they were able to help provide that. Since I’m a nanny, I don’t have dental insurance. Then my car needed a few repairs and they were also able to take care of that, which was super helpful,” she said.

Unlike her college friends who call their parents when they need money or emotional support, that option isn’t available to Minson because she does not maintain contact with her mom and dad.

“I wish I had like parents to reach out to but that’s where I’m super grateful for the aftercare. If there is an emergency, there’s always a resource to help you,” she said.

When she needs assistance, she calls TAL program manager Milton Gale who connects her to government or community resources. Recently, he explained to her how the car buying process works.

“He just walked me through different options and helped me out, which was super nice,” she said.

While she still receives some services, Minson said she no longer has regularly scheduled meetings with caseworkers or attends court so a judge can monitor her progress.

Minson said her experiences in foster care were largely positive. She felt like caseworkers, attorneys who represented her interests and court appointed special advocates (CASA volunteers for short) had her back.

Except for one placement with foster parents who were not her kin, Minson has mostly lived with extended family. At first, she and her siblings were placed with their grandparents. Minson has also lived with aunts and uncles.

So remaining in an aftercare program seemed a logical next step, but Minson concedes many youth in foster care don’t view it that way. Despite caseworkers’ efforts to make them aware of ongoing supportive services, which also include the option of reentering care, and explaining the significant risks of aging out of care without a network of support, some youths simply want out of the system.

Risks of aging out

The risks associated with aging out of state care without support are well documented: a greater chance of homelessness or housing instability, dropping out of school, unemployment, physical and behavioral health issues, early parenthood and criminal justice system involvement.

“We know that a lot of young people have had such poor experiences in foster care, that even facing sort of these dire predictions, they choose not to participate in extended foster care,” said Susan Vivian Mangold, chief executive officer of the Juvenile Law Center, the first nonprofit, public interest law firm for children in the country.

But policymakers have long recognized the need for services to help youth aging out of foster care to make successful transitions, both for their sake and to save public resources.

As more states gained experience with transition services and programs, federal lawmakers later passed laws that raised the age of eligibility to 23.

The Consolidated Appropriations Act — passed in 2020 at the height of the coronavirus pandemic — took that a step further. It temporarily expanded eligibility through age 26 and added $400 million in one-time funding for Chafee programs offering housing, education and direct assistance to current and former foster youth.

Mangold said 45 states provide an array of extended care services, which she views as not only as a moral imperative but good fiscal sense.

“It’s not only our responsibility, but in our own self-interest for these young people to have a smoother transition to adulthood,” Mangold said.

But convincing young people who have aged out of foster care to stay connected or return to the system can be a steep challenge, said Aubrey Myers, Utah’s Transition to Adult Living program administrator.

“Some of the youth are just tired of the state’s involvement and miss out on services because they’re just tired of being involved with caseworkers, courts, judges and attorneys and all of that stuff,” he said. So they miss out on many benefits, such as educational training vouchers and help getting into apartments by covering utilities fees and first and last month’s rent.

At the peak of the pandemic, when many service industries shuttered, putting young adults out of work, financial assistance was available to keep affected youths in their housing, Myers said.

Education assistance funds were available to help them obtain laptops and hot spots so they could participate in online learning. The window to apply for the services under the temporary expansion is closed, but many other options remain available.

While many of those who age out of the foster system may resist extended help after many years in state care, Myers said without support, former foster youths are at enhanced risk of homelessness and criminal justice system involvement.

“We know that within 18 months of leaving care, between 25% and 30% of our youth will find themselves homeless at some point,” he said.

That can mean couch surfing but also young adults sleeping in their cars. “That’s a big one we try to deal with because a lot of our youth aren’t at that point where they’re emotionally mature enough that they can maintain housing,” he said.

The program attempts to work with young people to help them develop skills that will enable them to live independently.

“We also really want to try to get them connected to a trustworthy adult so that they have somebody to call and connect and interact with as they leave the system as well as their TAL (Transition to Adult Living) coordinator,” he said.

Another concern is that many young men, within a year to 18 months of leaving state care, commit a felony offense, “which makes it even harder to find a job, to keep a job or to make ends meet,” Myers said.

Young women also are at enhanced risk of homelessness. A considerable number of young women who leave state care become mothers, which also makes it difficult to maintain employment, obtain child care or pay for housing.

“There’s always the mental health piece, “Myers said. “The majority of our youth have a lot of trauma. That’s another big focus is that, you know, a lot of our youth are kind of done with therapy” even when they still need the help of licensed therapists and for some, medication.

“They’re just in that place where they don’t want to be involved with that stuff anymore and want to take on the world and don’t necessarily have the skill set to do that, even though we offer Medicaid, especially for those who don’t age out until they’re 26,” he said.

Minson is studying social work in college and wants to either seek a master’s degree in social work or possibly attend law school to become a guardian ad litem to work with children in state care.

She believes her own experiences in foster care will help her professionally because she understands what it is like when children who experience abuse and the role trusted adults play in helping them navigate care and the network of services that can help a child find firm footing.

Minson said she endured a chaotic childhood by immersing herself in her studies. She did well in school and graduated on time.

Early on in foster care, a caseworker asked Minson, given all that she had experienced, “Why aren’t you on drugs or pregnant? This is just kind of rare,” referring to her academic success, eschewing substances and avoiding other risky behaviors.

“I don’t know. I’m not really into that type of stuff.”

Minson also credits her enduring faith, despite her parents falling away from The Church of Jesus Christ of Latter-day Saints during her childhood.

At a particularly difficult period, Minson and her siblings asked the bishop of their ward to intervene, which further fueled their parents’ fury, she said. Their father explained away the abuse as discipline and there was no further intervention, Minson said.

“The bishop, I felt, was supposed to be someone who would help us out. It took me a while to get over that,” she said.

When she entered foster care, Minson resumed attending church. She served a church mission in the Fort Worth, Texas, area, although it was shortened by the pandemic.

“Yeah, life since the mission hasn’t been exactly what I was expecting,” she said.

But Minson is still standing. Contrary to her parents’ warning that she would lose touch with her siblings, they remain close. Her sister was adopted while her brother opted to return to their parents.

She is also close to extended family who helped her when it was unsafe for her and her siblings to return home.

Minson plans to transfer to the University of Utah once she completes her associate degree at Salt Lake Community College and then enter graduate studies.

She needs university credentials to take the next steps in her career, but her life experiences will inform her work as well, she said.

While in foster care, Minson met others in care and “we were able to say, ‘Hey, I get where you’re coming from. My parents were also this way and this is how it affected me and this is the trauma I’m still dealing with.’”

“That was a huge thing for me as I was just like, I feel like no one understands the aftereffects of going through so much trauma, through physical abuse, and emotional abuse, and just all of that, so finding people to reach out to, that is super helpful,” she said. “So I feel like it would almost be a waste for me not to use my experiences to help others. Yeah, I’m trying to, like, turn it into something positive and move on from that.”