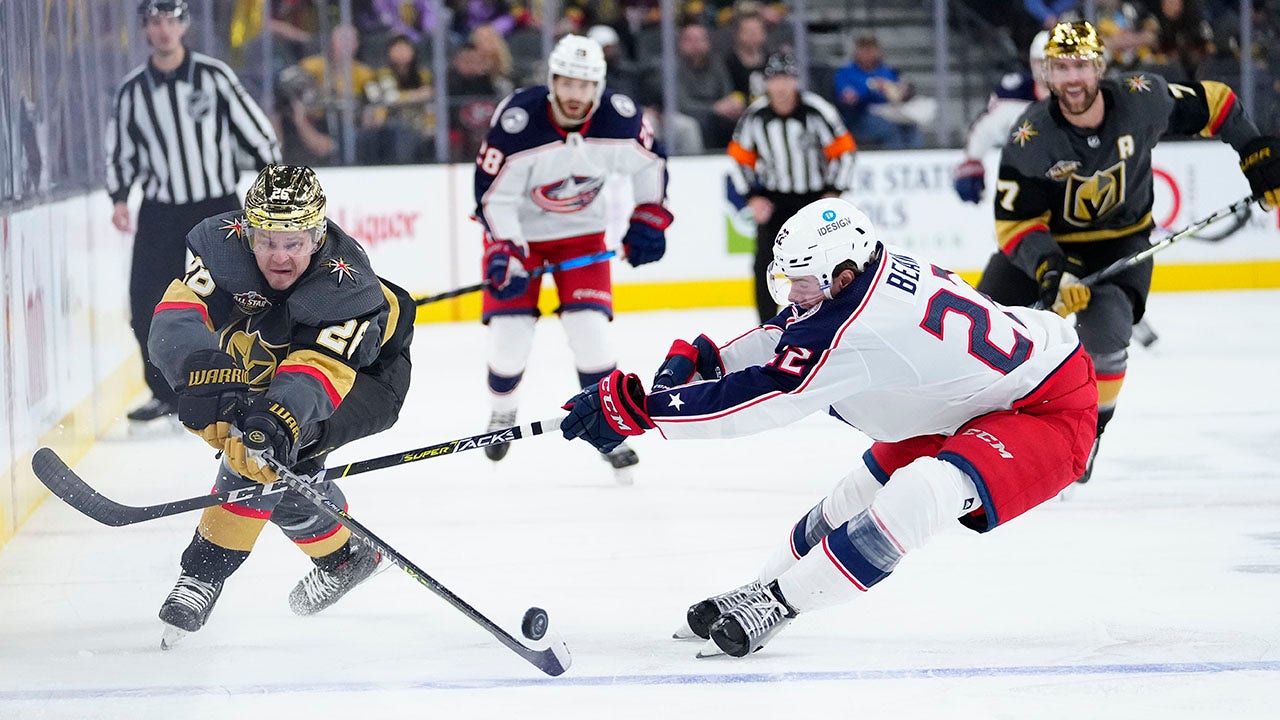 Mattias Janmark broke a tie in the third period and the Vegas Golden Knights defeated the Columbus Blue Jackets 3-2 on Saturday night.

Vegas erased an early two-goal deficit and has won 10 of its last 13 since opening the season 1-4-0.

Kolesar also assisted on Janmark’s winner, and both netted their first goal of the season.

After gathering a loose puck behind the goal line, Kolesar found Nic Hague, who one-timed a pass to Janmark, who snuck in from behind the net. Janmark was then crafty with a quick forehand-to-backhand chip shot past Columbus goaltender Elvis Merzlikins.

“We’re finding ways to win,” coach Peter DeBoer said. “I can’t wait until we’re healthy and we can roll a full lineup out there. It’s going to be on those guys coming in to jump in and continue with the foundation we’re on right now.”

The Blue Jackets had their three-game road winning streak snapped. They lost to a Western Conference opponent for the first time this season after starting out 6-0-0.

Columbus, which was on a 4-1-0 run against the Golden Knights and had won its last two in Vegas, had the tables turned after earning seven comeback victories in its nine wins.

“We’re a team that has to get pucks in and get on the forecheck and create chances that way,” Columbus defenseman Zach Werenski said. “Obviously if there’s plays there we can make ’em, but it seems like tonight we were just forcing too many plays, not really playing our game and feeding into what they like to do and they made us pay for it.”

Columbus opened the scoring when Nyquist’s deflection of Jake Bean’s shot from the point beat Brossoit over his stick 45 seconds into the game. Texier made it 2-0 at 8:42 of the first when he took a pass along the boards, raced into the zone, skated around Stone and slipped the puck past Brossoit’s skate far side for a short-handed goal.

At 7:07 in the second period, Kolesar brought an end to Merzlikins’ perfect streak in Vegas at 42 saves and started the comeback.

Smith tied the game early in the third during a penalty kill, breaking into the zone alone to beat Merzlikins for Vegas’ second short-handed goal of the season.

“It was a super resilient effort the last few games,” Smith said. “Every game there’s something else happening, a little more adversity. For guys to come in and be able to contribute, it’s the world for us right now.”

NOTES: With the assist on Nyquist’s goal, Werenski reached the 200-point plateau in his career, all with the Blue Jackets. Werenski also assisted on Texier’s goal. … Columbus has killed off 14 straight Golden Knights power plays the past six meetings. … Four of the last five meetings have been one-goal games. … Columbus has killed off 20 of 21 penalties over the last eight games (95.2%). … Columbus forward Max Domi returned after missing six games in COVID-19 protocol and was excited his first game back was in Vegas. “I don’t know anyone that has come in here and said it was tough to get up for this game. You go for warmups and it feels like a nightclub. Can’t beat that,” he said.

Columbus: At the Buffalo Sabres on Monday.

Vegas: At the St. Louis Blues on Monday.