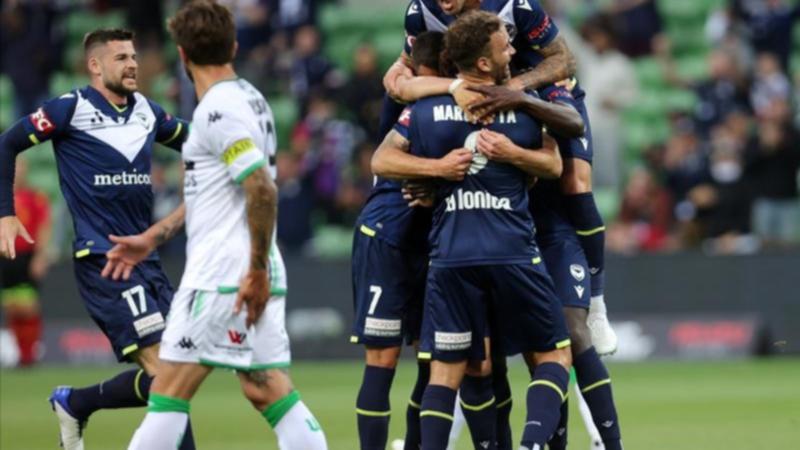 Melbourne Victory are on top of the A-League Men table after beating Western United 3-1 to end their crosstown rivals’ four-game winning streak.

John Aloisi’s United hadn’t lost since their round one 1-0 loss to Victory but were put on the back foot when Jason Geria headed home Jake Brimmer’s corner in the 18th minute before Josh Brillante added a second a minute later.

Aleksandar Prijovic snatched a goal back in the 87th but Nick D’Agostino added a third in injury-time to ensure Victory went top of the league, ahead of Macarthur FC on goal difference.

United confirmed pre-match they had a further two COVID-19 cases in their playing ranks, after having three positives last week.

A further four United players have been required to isolate as close contacts.

Ten minutes into the game, Victory had a calamitous defensive mix-up but when Connor Pain sliced a shot towards goal, Ivan Kelava made a big diving save

Seven minutes later, Brimmer whipped in a corner and Geria rose to bury his first ALM goal in his 126th appearance.

United turned it over from the subsequent kick-off and Brillante hit the ball to Brimmer, who traded quick passes with Francesco Margiotta.

The Italian striker cut the ball back to Brillante, who smashed a piledriver past a diving Jamie Young for his first Victory goal.

In the 42nd minute, Brimmer charged into space and found Ben Folami on the left, who lashed a strike into the crossbar.

Both teams traded second-half chances but United put the game back on edge in the 87th minute.

Lachie Wales lofted a cross into the 18-yard box and after Victory’s Roderick Miranda missed his attempted clearance, Prijovic lashed a lovely strike past Kelava.

But seven minutes later, Marco Rojas went on a barnstorming run from deep in his own half, then laid the ball off to D’Agostino to coolly seal three points.

United were without skipper Alessandro Diamanti.